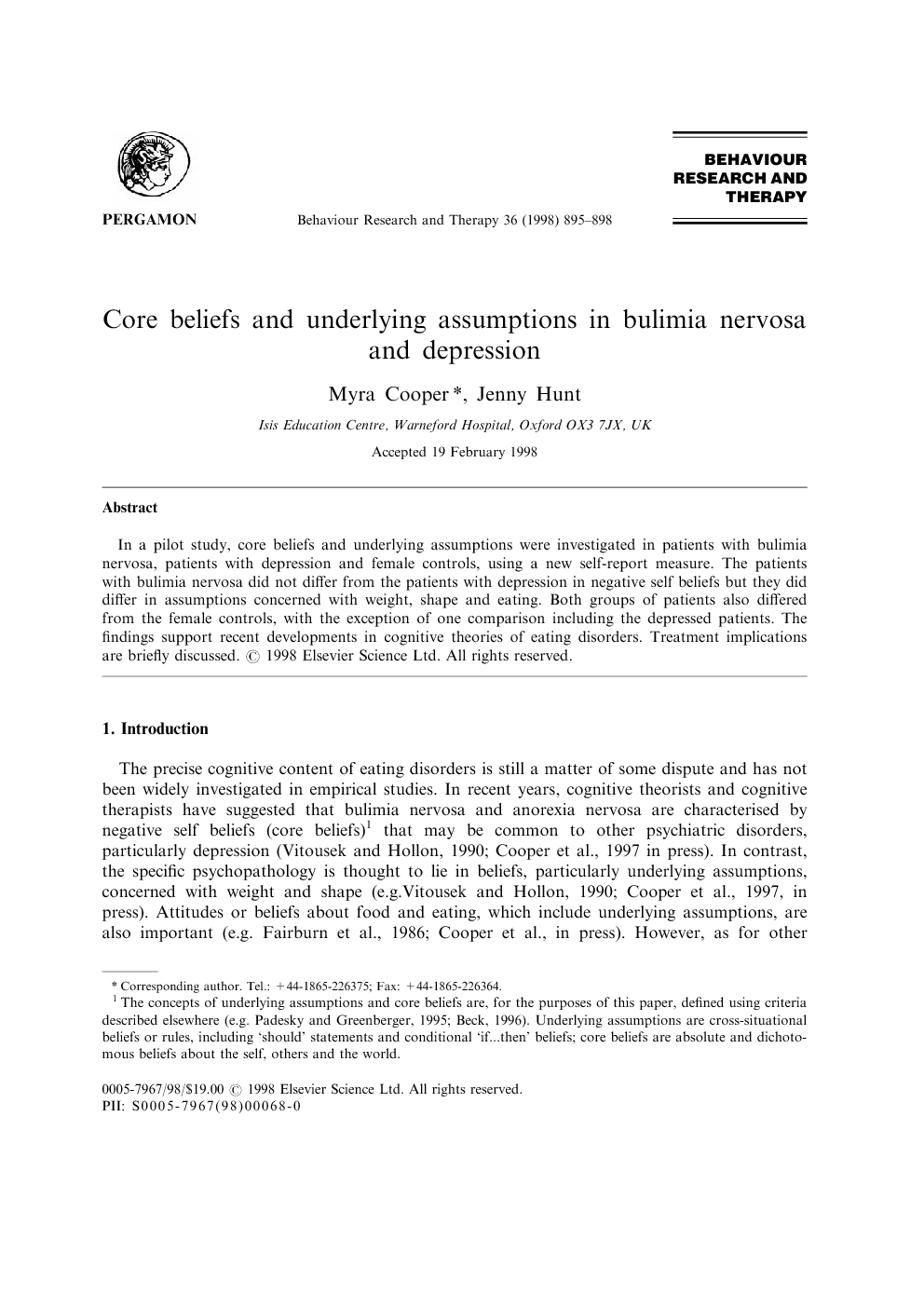 In a pilot study, core beliefs and underlying assumptions were investigated in patients with bulimia nervosa, patients with depression and female controls, using a new self-report measure. The patients with bulimia nervosa did not differ from the patients with depression in negative self beliefs but they did differ in assumptions concerned with weight, shape and eating. Both groups of patients also differed from the female controls, with the exception of one comparison including the depressed patients. The findings support recent developments in cognitive theories of eating disorders. Treatment implications are briefly discussed.

The precise cognitive content of eating disorders is still a matter of some dispute and has not been widely investigated in empirical studies. In recent years, cognitive theorists and cognitive therapists have suggested that bulimia nervosa and anorexia nervosa are characterised by negative self beliefs (core beliefs)1 that may be common to other psychiatric disorders, particularly depression (Vitousek and Hollon, 1990; Cooper et al., 1997, in press). In contrast, the specific psychopathology is thought to lie in beliefs, particularly underlying assumptions, concerned with weight and shape (e.g.Vitousek and Hollon, 1990; Cooper et al., 1997, in press). Attitudes or beliefs about food and eating, which include underlying assumptions, are also important (e.g. Fairburn et al., 1986; Cooper et al., in press). However, as for other cognitive content (and processes) in eating disorders, empirical evidence for the role of core beliefs and underlying assumptions in anorexia nervosa and bulimia nervosa is not extensive. A new measure, the Eating Disorder Belief Questionnaire (EDBQ; Cooper et al., 1997), assesses negative self beliefs and three types of underlying assumptions (weight and shape as a means to acceptance by others; weight and shape as a means to self acceptance; control of eating), and has promising psychometric properties. The present study was designed as a small pilot study to investigate each of these three theoretical suggestions. It sought to test the hypothesis that bulimia nervosa patients, as well as depressed patients, would score highly on the negative self beliefs subscale of the EDBQ, but that, compared to the depressed patients, the patients with bulimia nervosa would score more highly on the three underlying assumptions subscales (the two weight and shape subscales and, in addition, the control of eating subscale).