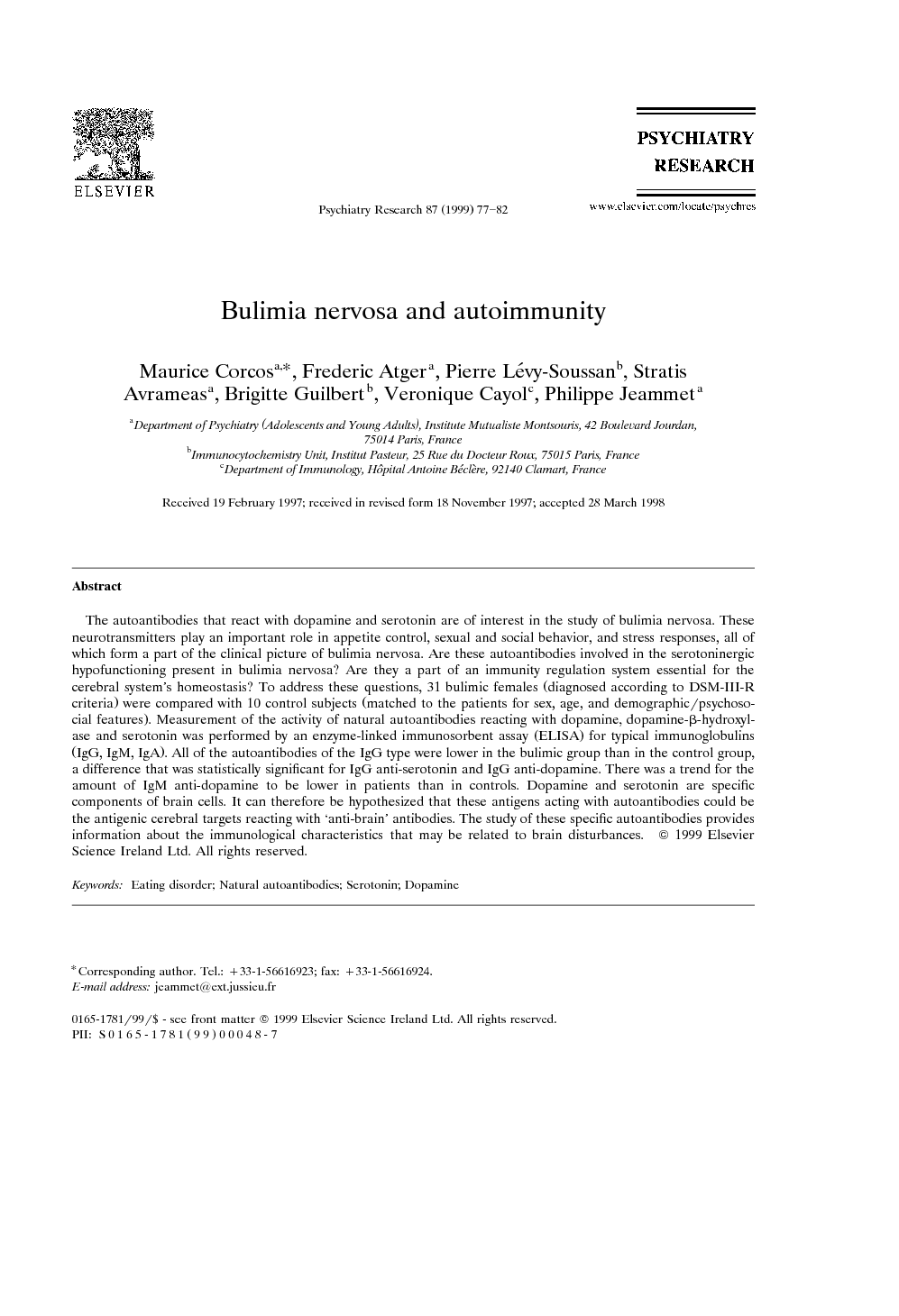 The autoantibodies that react with dopamine and serotonin are of interest in the study of bulimia nervosa. These neurotransmitters play an important role in appetite control, sexual and social behavior, and stress responses, all of which form a part of the clinical picture of bulimia nervosa. Are these autoantibodies involved in the serotoninergic hypofunctioning present in bulimia nervosa? Are they a part of an immunity regulation system essential for the cerebral system’s homeostasis? To address these questions, 31 bulimic females (diagnosed according to DSM-III-R criteria) were compared with 10 control subjects (matched to the patients for sex, age, and demographic/psychosocial features). Measurement of the activity of natural autoantibodies reacting with dopamine, dopamine-β-hydroxylase and serotonin was performed by an enzyme-linked immunosorbent assay (ELISA) for typical immunoglobulins (IgG, IgM, IgA). All of the autoantibodies of the IgG type were lower in the bulimic group than in the control group, a difference that was statistically significant for IgG anti-serotonin and IgG anti-dopamine. There was a trend for the amount of IgM anti-dopamine to be lower in patients than in controls. Dopamine and serotonin are specific components of brain cells. It can therefore be hypothesized that these antigens acting with autoantibodies could be the antigenic cerebral targets reacting with ‘anti-brain’ antibodies. The study of these specific autoantibodies provides information about the immunological characteristics that may be related to brain disturbances.

The immune system has functions that extend beyond protecting the individual against potentially harmful intruders. There are strong interrelationships between the immune system, the central nervous system, the endocrine system and the psychological processes that appear to play a pivotal role in the pathogenesis of psychiatric disorders. An earlier study conducted by our group examined the correlations between the rates of natural autoantibodies and weight variations in patients with anorexia nervosa (Barbouche et al., 1993). Increased levels of total IgM were found in patients at the time of admission and were interpreted as reflecting a possible non-specific defense of the organism against external infectious agents, through an increase of the reactions of opsonization. In schizophrenia and depression, activation of the immune system has been repeatedly observed (e.g. Pandey et al., 1981 and Anderson, 1996). The accumulation of empirical evidence and the theoretical constructs synthesized in a review by Holden and Pakula (1996) strongly suggest that anorexia and bulimia nervosa are serious disorders of the immune system. We know that states of stress and chronic depression such as those observed in bulimic behaviors are associated with an activation of the cortico–adrenal system, which secretes adrenaline, noradrenaline and other catecholamines into the blood and influences the immune system. Serotonin plays an integral role in appetite control, sexual and social behavior, and stress responses, all of which are part of the clinical picture of bulimia nervosa. In anorexia nervosa and bulimia nervosa, secretion of the neurotransmitter serotonin is inhibited while that of norepinephrine is increased. Impulsivity and the repressed need to be in control, which are hallmark characteristics of bulimia nervosa, may provoke chronic states of stress and, moreover, be at the root of a form of depression that is largely expressed by somatic and behavioral symptoms. It would, therefore, seem valuable to explore the effects of this type of psychosomatically expressed depression on the immune system and to compare them with the numerous data that have been collected in studies of typical forms of depression. From the point of view of etiopathogenesis, it would also be of interest to study autoantibodies that react with dopamine and serotonin, neurotransmitters that are hypothesized to be important in many forms of psychiatric disorder. One of the presumed roles of natural autoantibodies is their involvement in immunoregulation (Zanetti, 1986 and Zanetti et al., 1992). It is now clear that self-recognition provides the very basis for the induction of tolerance to autoantigens during ontogeny and that this process continues throughout life in various immunoregulatory networks that maintain self-tolerance (Coutinho et al., 1984, Avrameas et al., 1988, Varela and Coutinho, 1991 and Avrameas and Ternynck, 1993). The failure of appropriate self-recognition results in autoimmune disease. Are the natural autoantibodies involved in the serotoninergic hypofunctioning that has been reported in bulimia nervosa? Are they part of an immunoregulatory system essential for the cerebral system’s homeostasis? The study of these specific autoantibodies will permit us to create an immunological picture of brain disturbances.