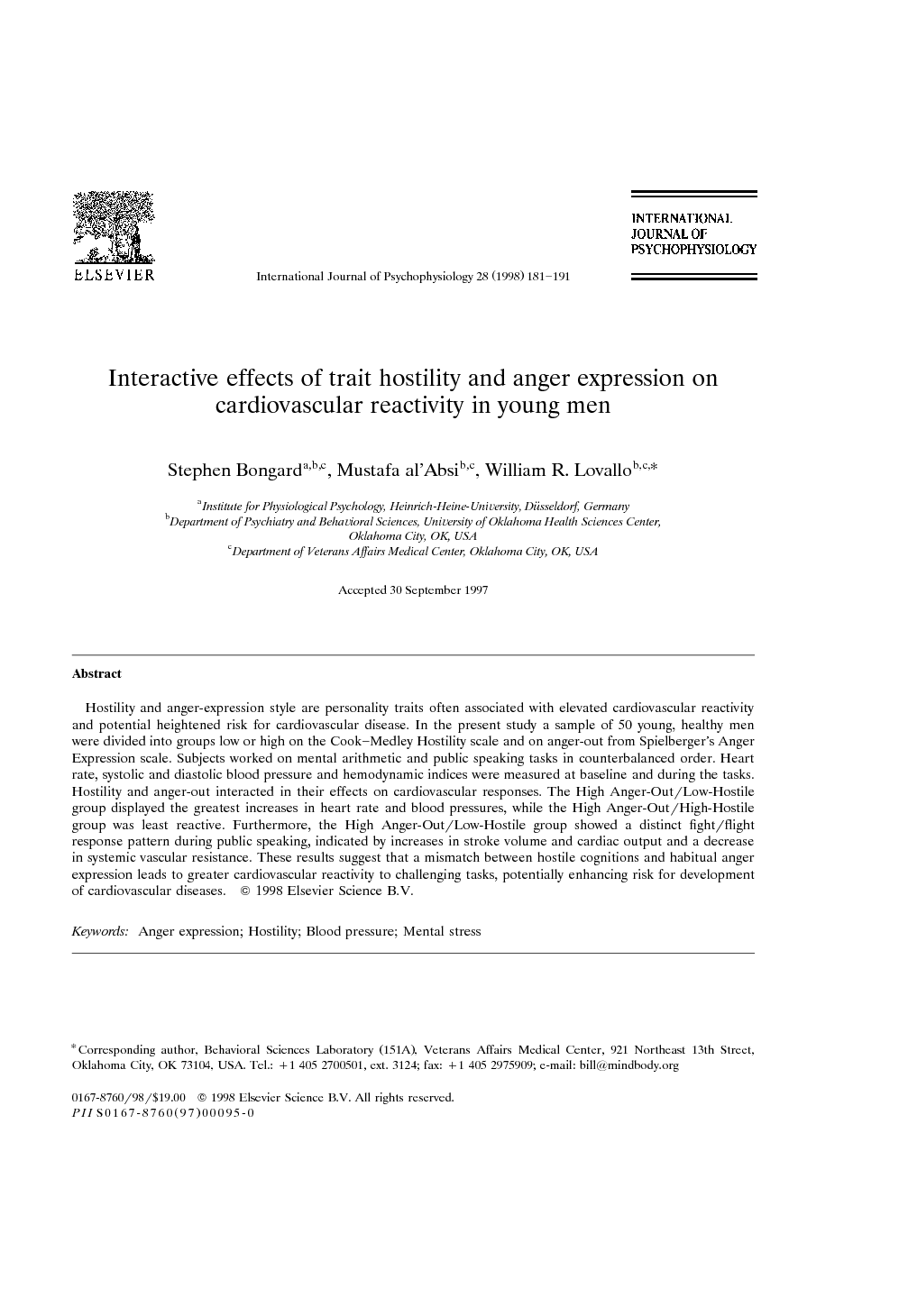 Hostility and anger-expression style are personality traits often associated with elevated cardiovascular reactivity and potential heightened risk for cardiovascular disease. In the present study a sample of 50 young, healthy men were divided into groups low or high on the Cook–Medley Hostility scale and on anger-out from Spielberger's Anger Expression scale. Subjects worked on mental arithmetic and public speaking tasks in counterbalanced order. Heart rate, systolic and diastolic blood pressure and hemodynamic indices were measured at baseline and during the tasks. Hostility and anger-out interacted in their effects on cardiovascular responses. The High Anger-Out/Low-Hostile group displayed the greatest increases in heart rate and blood pressures, while the High Anger-Out/High-Hostile group was least reactive. Furthermore, the High Anger-Out/Low-Hostile group showed a distinct fight/flight response pattern during public speaking, indicated by increases in stroke volume and cardiac output and a decrease in systemic vascular resistance. These results suggest that a mismatch between hostile cognitions and habitual anger expression leads to greater cardiovascular reactivity to challenging tasks, potentially enhancing risk for development of cardiovascular diseases.

Since the classic work of Alexander (1939), numerous studies have examined the characteristics of habitual anger-coping style or hostility as potential modifiers of cardiovascular activation during stress (Diamond, 1982, Chesney and Rosenman, 1985 and Siegman and Smith, 1994). Recent reviews have concluded that hostile individuals are likely to display greater cardiovascular responses if they are harassed while working on a challenging task (Suls and Wan, 1993, Helmers et al., 1994 and Houston, 1994). In addition to situational factors, interactions of hostility disposition with anger or anger expression, may also influence cardiovascular responses. Hostility, anger and anger expression represent related aspects of what Spielberger called the AHA (Anger–Hostility–Aggression) syndrome (Spielberger et al., 1985 and Johnson, 1990). Hostility, defined as an enduring negative attitude toward the environment and others, describes a cognitive process (Buss, 1961 and Spielberger et al., 1985). Anger, defined as feelings ranging from mild irritation to rage, describes the emotional component of the syndrome. Finally, anger expression describes part of the overt behavioral potential for aggression. These constructs may occur separately from one another. For example, an individual might feel angry about another person, but need not have a hostile attitude toward that person. Although separable in this way, hostility, anger and anger expression are mutually reinforcing aspects of this syndrome. A hostile attitude increases the chance for angry feelings and these increase the chance for expression of anger. Given the separable aspects of the anger–hostility–aggression syndrome and in consideration of the behaviorally interfering properties of the three components, the question arises of the effect of these elements on cardiovascular responses during stressful situations. On the one hand, the most emotion-reinforcing combination of high hostility, high anger expression might be expected to lead to the largest cardiovascular responses to socially relevant challenges. On the other hand, two combinations of these traits, high hostility with anger-in and low hostility with anger-out, are potentially associated with internal conflicts that might in fact produce the largest responses (Engebretson et al., 1989). Despite the potential importance of studying hostility together with anger-expression style few studies have done so. Burns and Katkin (1993)exposed subjects to the socially relevant challenges of harassment or a social evaluation while they worked on a reaction time task. Volunteers were later classified on anger expression (both anger-out and anger-in) and on hostility (Cook–Medley Ho scale). Under harassment, persons high in anger expression (high anger-out with low anger-in) had the greatest blood pressure rises to the task. With harassment and social evaluation groups combined, larger responses occurred among those high in hostility and a derived measure of anger expressiveness (anger-out minus anger-in). These results agree in part with an earlier study employing mental arithmetic without harassment (Burns et al., 1992). In this case, elevated cardiac activation occurred in both the Low Anger-In/Low-Hostility and High Anger-In/High-Hostility groups relative to Low Anger-In/High-Hostility and High Anger-In/Low-Hostility groups. The authors concluded that in situations without harassment but calling for efforts with limited control, specific combinations of anger expression and hostility are related to enhanced activation. It seems that the most reactive groups may be those manifesting unexpected combinations of hostility and anger expression: high-hostility with anger-in or low-hostility with anger-out. These combinations of traits may represent either repressed anger or suppressed hostility, combinations originally predicted by Alexander (1939)to be most psychosomatically risk-laden. In contrast, during overt provocation it is perhaps to be expected that persons high in hostility (cf. Everson et al., 1995) or high anger expressiveness may exhibit greater cardiovascular reactions. In the present study, volunteers worked on two standard stressors differing in the amount of their social relevance, but without harassment, a mental arithmetic task and a public speaking task. We expected that combinations of hostility and anger-coping measures would have greater effects on cardiovascular stress responses than each of the personality measures alone. We also expected that differences in response to public speaking relative to mental arithmetic would be more indicative of differential sensitivity to socially relevant challenge.