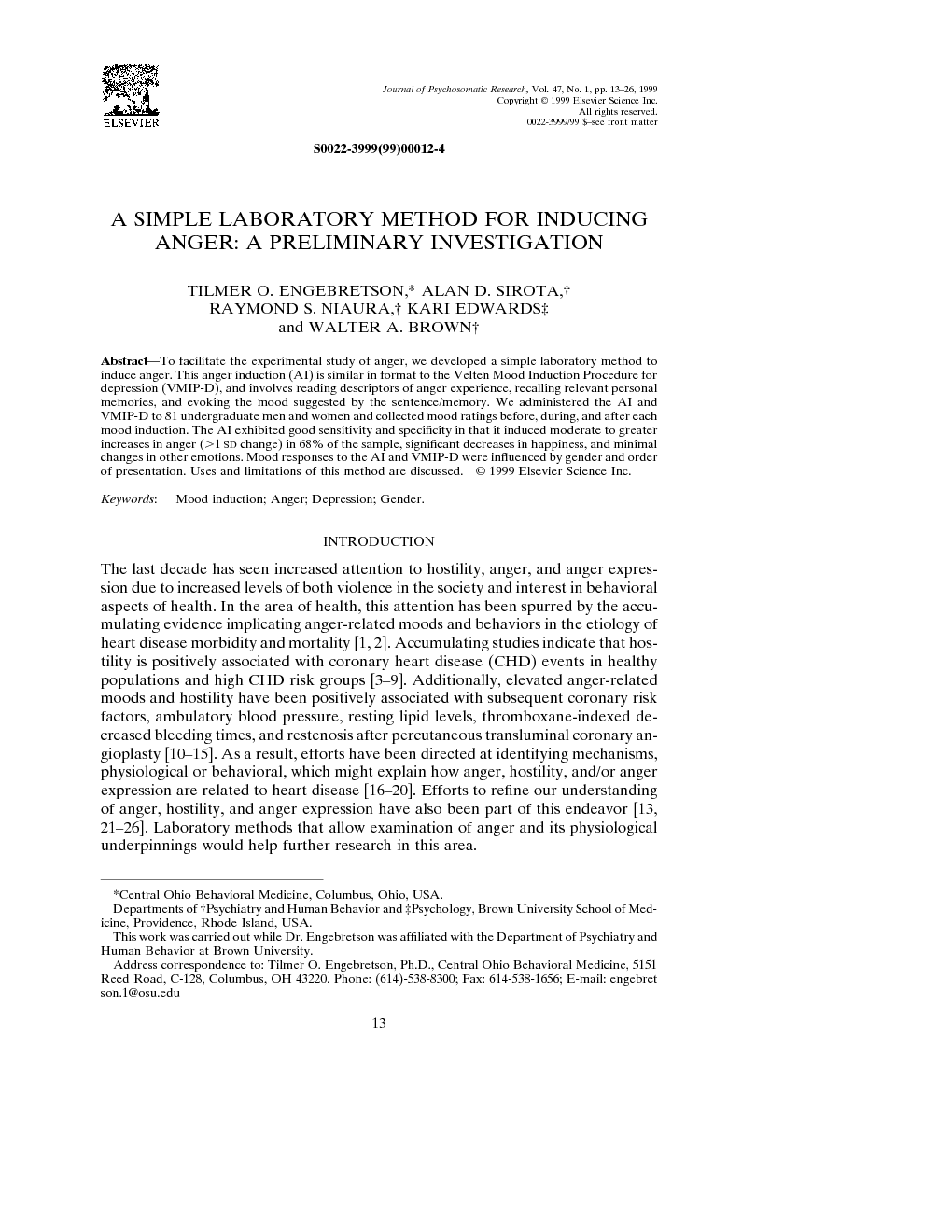 To facilitate the experimental study of anger, we developed a simple laboratory method to induce anger. This anger induction (AI) is similar in format to the Velten Mood Induction Procedure for depression (VMIP-D), and involves reading descriptors of anger experience, recalling relevant personal memories, and evoking the mood suggested by the sentence/memory. We administered the AI and VMIP-D to 81 undergraduate men and women and collected mood ratings before, during, and after each mood induction. The AI exhibited good sensitivity and specificity in that it induced moderate to greater increases in anger (>1 sd change) in 68% of the sample, significant decreases in happiness, and minimal changes in other emotions. Mood responses to the AI and VMIP-D were influenced by gender and order of presentation. Uses and limitations of this method are discussed.

The last decade has seen increased attention to hostility, anger, and anger expression due to increased levels of both violence in the society and interest in behavioral aspects of health. In the area of health, this attention has been spurred by the accumulating evidence implicating anger-related moods and behaviors in the etiology of heart disease morbidity and mortality 1 and 2. Accumulating studies indicate that hostility is positively associated with coronary heart disease (CHD) events in healthy populations and high CHD risk groups 3, 4, 5, 6, 7, 8 and 9. Additionally, elevated anger-related moods and hostility have been positively associated with subsequent coronary risk factors, ambulatory blood pressure, resting lipid levels, thromboxane-indexed decreased bleeding times, and restenosis after percutaneous transluminal coronary angioplasty 10, 11, 12, 13, 14 and 15. As a result, efforts have been directed at identifying mechanisms, physiological or behavioral, which might explain how anger, hostility, and/or anger expression are related to heart disease 16, 17, 18, 19 and 20. Efforts to refine our understanding of anger, hostility, and anger expression have also been part of this endeavor 13, 21, 22, 23, 24, 25 and 26. Laboratory methods that allow examination of anger and its physiological underpinnings would help further research in this area. Prior laboratory inductions of anger have relied largely on methods using either deception 23 and 27, scripts, [28], hypnotic suggestion [29], or facial feedback [30]. Although effective at times, each of these methods has inherent difficulties. For example, deception methods may raise ethical concerns and involve elaborate choreography to hide the real purpose of the study. Hypnotic suggestion methods may only work with a small portion of subjects (i.e., those who score high on hypnotic susceptibility), with the result that the findings may have little generalizability. The paucity of methods to induce anger is in contrast to the multiplicity of methods that have been developed to induce other moods such as anxiety, depression, and elation [31]. As Martin summarizes, 16 different methods have been used to induce different mood states, including self-statements, music, film, hypnotic suggestion, game feedback, social feedback, solitary recollection, imagery, empathy, and threat of shock [31]. Moods induced by these methods have most often been depression, happiness, and anxiety. One highly effective approach to inducing affect change in the laboratory is a procedure based on a self-statement approach [32]. There are several advantages of employing such an approach for inducing anger including: (a) direct comparability with existing self-statement methods for the induction of depression and elation; (b) the ability to use the subjects' own experiences as active components of the anger induction; (c) the graded increase in emotional imagery intensity over the course of the induction; and (d) few ethical concerns regarding informed consent. The main criticism of the self-statement approach, and incidentally of most other mood induction methods as well, centers on the extent to which reports of mood changes during such procedures are demand effects (e.g., reporting mood changes to satisfy the experimenter) rather than actual subjective experiences. Although some demand effects do occur, four recent lines of evidence suggest that demand effects do not fully account for the effects of self-statement-based laboratory mood inductions. First, a meta-analysis that examined the effects of manipulating mood induction study cover stories concluded that more than 50% of the self-reported mood changes that occur in response to Velten-style self-statement mood inductions reflect actual mood changes [33]. Larsen and Sinnett [33] based their meta-analytic conclusion on a comparison between laboratory studies which were honest about the purpose of the mood manipulation (experimental expectations were obvious, thereby increasing the likelihood of demand effects) and those which employed some sort of deception to hide the purpose of the mood manipulation (hence minimizing the likelihood of demand effects). Mean effect sizes, reflecting magnitude of induction-induced mood changes, from studies employing deceptive cover stories were about 50% of those studies which were honest regarding the purpose of the mood manipulation (i.e., .46 and .89, respectively). Second, self-statement style mood induction studies have produced mood dependent differences in a) memory recall 34, 35 and 36, b) likelihood estimations regarding future event probabilities [36], and c) verbal speech rates under both self-paced and maximal performance demand conditions (which, interestingly, would counter mood induction demand effects) 34 and 37. Third, mood induction studies that have examined physiological concomitants of self-statement mood inductions have reported mood-specific physiological changes; that is, changes not attributable to demand effects 34, 35, 36 and 37. Fourth, anecdotal experiences from our previous studies, such as when depression inductions have led to tears, have appeared authentic and not due to simple demand effects. We concluded that the self-statement approach is a viable method of inducing affect. Therefore, in the current study, we used this approach to devise a simple laboratory method for the induction of anger.