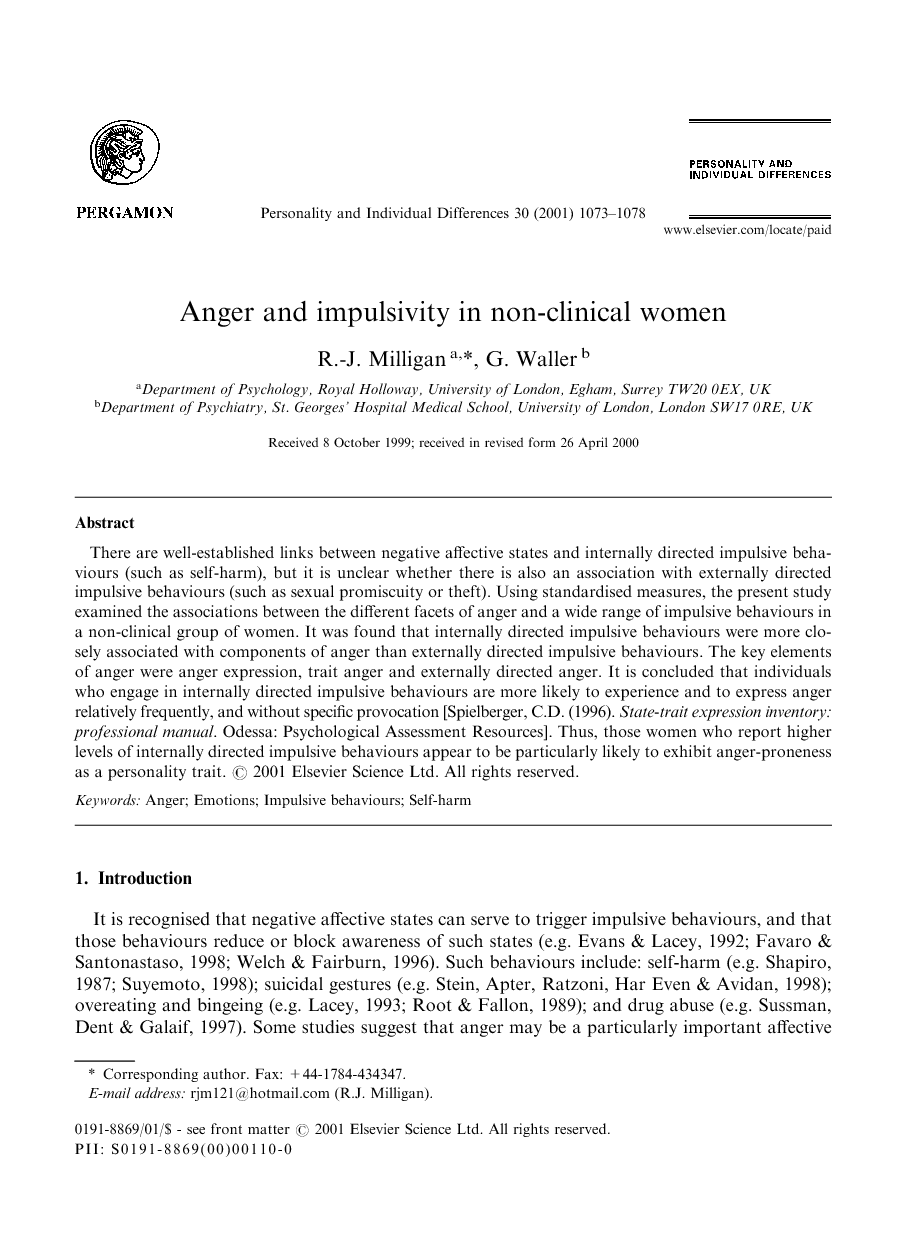 It is recognised that negative affective states can serve to trigger impulsive behaviours, and that those behaviours reduce or block awareness of such states (e.g. Evans and Lacey, 1992, Favaro and Santonastaso, 1998 and Welch and Fairburn, 1996). Such behaviours include: self-harm (e.g. Shapiro, 1987 and Suyemoto, 1998); suicidal gestures (e.g. Stein, Apter, Ratzoni, Har Even & Avidan, 1998); overeating and bingeing (e.g. Lacey, 1993 and Root and Fallon, 1989); and drug abuse (e.g. Sussman, Dent & Galaif, 1997). Some studies suggest that anger may be a particularly important affective precipitant of some impulsive behaviours (e.g. Arnow et al., 1992, Arnow et al., 1995, Simeon et al., 1992 and Soloff et al., 1994). However, there are two major weaknesses in the literature. First, research has tended to focus on internally directed impulsive behaviours (such as self-harm and bulimia), with less attention given to more externally directed behaviours (such as ‘daredevil’ behaviour or theft). Consequently, it is not known whether anger plays a precipitating role in impulsivity generally, or only in those behaviours that are internally directed. Second, it is problematic that studies have not always conceptualised anger in the same way. Some have treated anger as unitary (e.g. Arnow et al., 1992 and Arnow et al., 1995), whereas others have focused on related concepts such as aggressiveness (e.g. Åsberg et al., 1987 and Chowanec et al., 1991). It is clearly important to understand the multi-faceted nature of anger. Anger can be conceptualised either as an emotional state (which varies in intensity) or as a trait (a relatively stable personality characteristic) (e.g. Spielberger, 1996 and Spielberger et al., 1983). Additionally, individuals can vary in the extent to which they will suppress or express their anger ( Spielberger). Given these gaps in the existing literature, the present study of a non-clinical population of women has two central aims. First, it will explore whether anger is generally associated with impulsivity. The second aim is to explore whether different components of anger are associated more specifically with internally directed or externally directed impulsive behaviours.