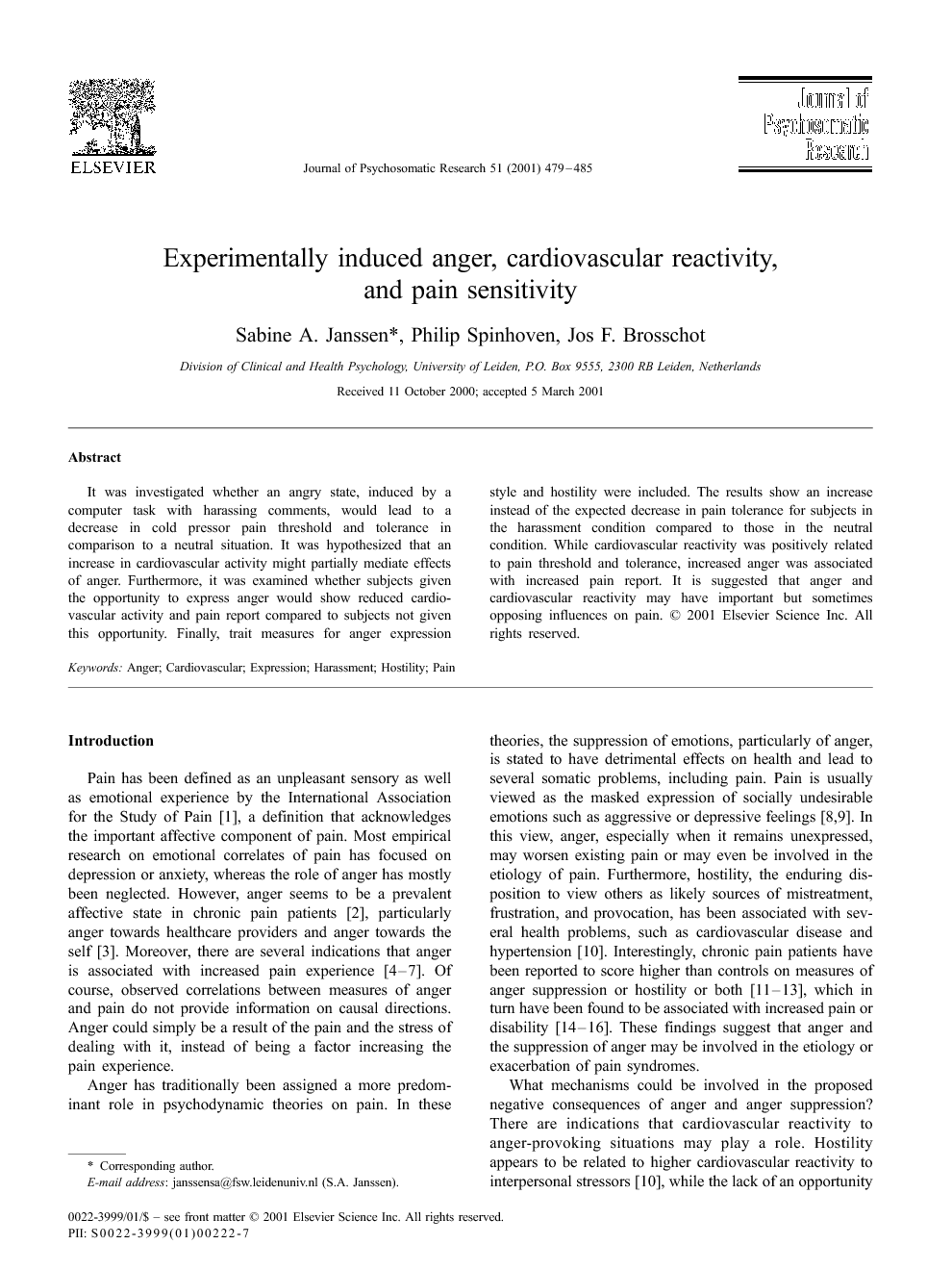 It was investigated whether an angry state, induced by a computer task with harassing comments, would lead to a decrease in cold pressor pain threshold and tolerance in comparison to a neutral situation. It was hypothesized that an increase in cardiovascular activity might partially mediate effects of anger. Furthermore, it was examined whether subjects given the opportunity to express anger would show reduced cardiovascular activity and pain report compared to subjects not given this opportunity. Finally, trait measures for anger expression style and hostility were included. The results show an increase instead of the expected decrease in pain tolerance for subjects in the harassment condition compared to those in the neutral condition. While cardiovascular reactivity was positively related to pain threshold and tolerance, increased anger was associated with increased pain report. It is suggested that anger and cardiovascular reactivity may have important but sometimes opposing influences on pain.

Pain has been defined as an unpleasant sensory as well as emotional experience by the International Association for the Study of Pain [1], a definition that acknowledges the important affective component of pain. Most empirical research on emotional correlates of pain has focused on depression or anxiety, whereas the role of anger has mostly been neglected. However, anger seems to be a prevalent affective state in chronic pain patients [2], particularly anger towards healthcare providers and anger towards the self [3]. Moreover, there are several indications that anger is associated with increased pain experience [4], [5], [6] and [7]. Of course, observed correlations between measures of anger and pain do not provide information on causal directions. Anger could simply be a result of the pain and the stress of dealing with it, instead of being a factor increasing the pain experience. Anger has traditionally been assigned a more predominant role in psychodynamic theories on pain. In these theories, the suppression of emotions, particularly of anger, is stated to have detrimental effects on health and lead to several somatic problems, including pain. Pain is usually viewed as the masked expression of socially undesirable emotions such as aggressive or depressive feelings [8] and [9]. In this view, anger, especially when it remains unexpressed, may worsen existing pain or may even be involved in the etiology of pain. Furthermore, hostility, the enduring disposition to view others as likely sources of mistreatment, frustration, and provocation, has been associated with several health problems, such as cardiovascular disease and hypertension [10]. Interestingly, chronic pain patients have been reported to score higher than controls on measures of anger suppression or hostility or both [11], [12] and [13], which in turn have been found to be associated with increased pain or disability [14], [15] and [16]. These findings suggest that anger and the suppression of anger may be involved in the etiology or exacerbation of pain syndromes. What mechanisms could be involved in the proposed negative consequences of anger and anger suppression? There are indications that cardiovascular reactivity to anger-provoking situations may play a role. Hostility appears to be related to higher cardiovascular reactivity to interpersonal stressors [10], while the lack of an opportunity to express anger seems to be related to delayed recovery of cardiovascular parameters [17] and [18]. There is also evidence that cardiovascular reactivity to an anger-provoking situation is stronger in certain chronic pain states [19]. Furthermore, Caceres and Burns [20] found that cardiovascular reactivity to harassment was positively related to pain sensitivity in subjects who were harassed before experimental pain stimulation but not in subjects who were harassed after pain stimulation. These data suggest that cardiovascular reactivity may be a mechanism by which pain sensitivity is increased during an anger-provoking situation. However, other studies report that exaggerated blood pressure reactivity to stress is associated with decreased pain sensitivity [21], [22] and [23], an effect that seems to rely on baroreceptor stimulation [24]. It could be speculated in Caceres and Burns [20] that cardiovascular reactivity merely reflected the degree of emotional arousal due to harassment and that anger rather than high cardiovascular reactivity was positively related to subsequent pain sensitivity. This would suggest an explanation of the relationship between anger and pain in terms of cognitive-emotional mediators rather than physiological mediators. Anger, or negative affect in general, may primarily change the affective/reactive aspects of pain, such as the motivation to withstand pain [25] and [26], or may modify the processing of pain-related information, increasing vigilance for physical symptoms [27]. The present study examines the effect of anger provocation on pain threshold and tolerance during a subsequent experimental pain task (cold pressor). This study differs from Caceres and Burns [20] in that a mental task including harassment was compared with a neutral mental task without harassment, thus isolating the effect of harassment and more straightforwardly investigating possible influences of an angry state on pain. Harassment was expected to increase cardiovascular measures and to decrease pain threshold and tolerance compared to a neutral situation. Furthermore, it was investigated whether cardiovascular reactivity would (partially) mediate effects of anger on pain. In addition, apart from the direct effect of a harassing task on subsequent pain, the prolonged effects of anger were investigated on cardiovascular measures and memory for pain. Measuring memory for pain may be interesting from a theoretical point of view, since mood-dependent shifts in pain recall have been observed, suggestive of processing biases associated with mood [28], [29] and [30]. Also, it was preferred to administering a second cold pressor task, since the effects of repeated measurement were considered unpredictable. Memory for cold pressor pain as well as recovery of subjective and cardiovascular measures were compared between subjects who had either been given a possibility or no possibility to express their anger. It was expected that, in subjects who had been harassed, the possibility of expressing angry feelings would lead to a lower pain report from memory and to a faster recovery of mood and cardiovascular measures [17] and [18] than the absence of such a possibility, whereas no such differences were expected in subjects who had not been harassed. Finally, to be able to observe associations between pain sensitivity and certain personality traits, questionnaires were included to measure anger expression style, hostility, negative affectivity, and trait anxiety. Specifically, negative relationships were expected between pain threshold and tolerance on the one hand and hostility or tendency to suppress anger on the other.