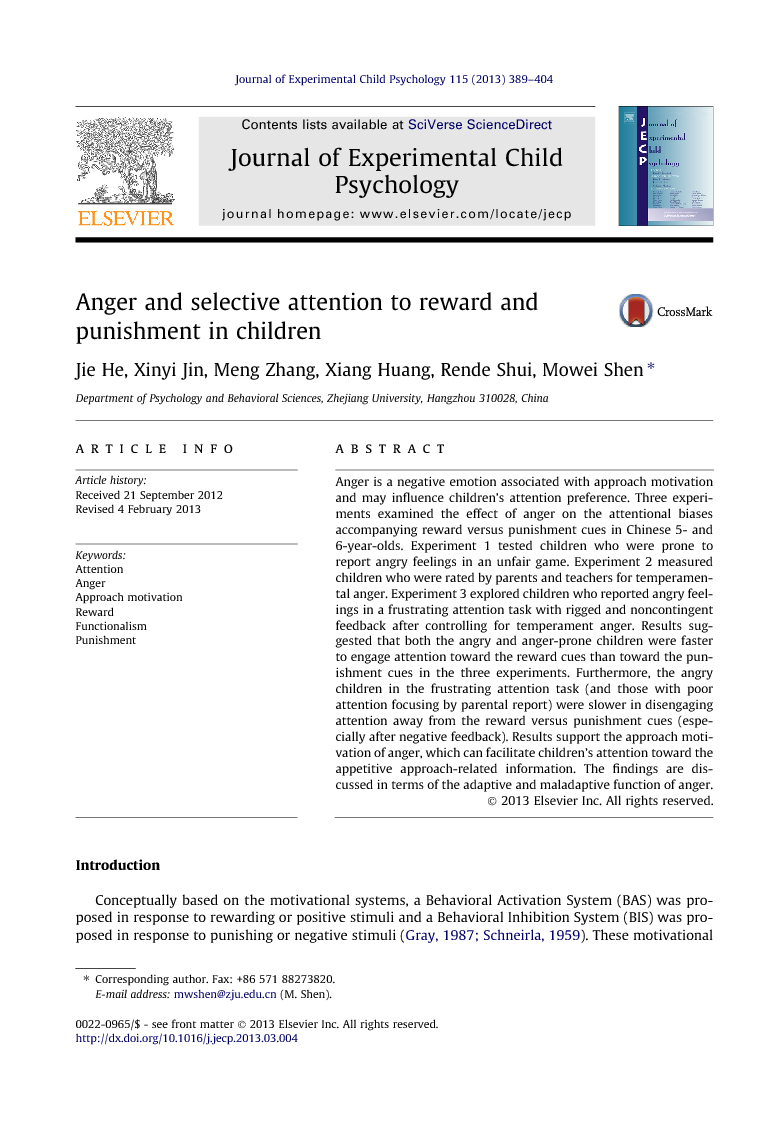 Anger is a negative emotion associated with approach motivation and may influence children’s attention preference. Three experiments examined the effect of anger on the attentional biases accompanying reward versus punishment cues in Chinese 5- and 6-year-olds. Experiment 1 tested children who were prone to report angry feelings in an unfair game. Experiment 2 measured children who were rated by parents and teachers for temperamental anger. Experiment 3 explored children who reported angry feelings in a frustrating attention task with rigged and noncontingent feedback after controlling for temperament anger. Results suggested that both the angry and anger-prone children were faster to engage attention toward the reward cues than toward the punishment cues in the three experiments. Furthermore, the angry children in the frustrating attention task (and those with poor attention focusing by parental report) were slower in disengaging attention away from the reward versus punishment cues (especially after negative feedback). Results support the approach motivation of anger, which can facilitate children’s attention toward the appetitive approach-related information. The findings are discussed in terms of the adaptive and maladaptive function of anger.

Our results using incentive manipulations revealed that the angry children in self-reports after unfair treatment or noncontingent feedback, and the anger-prone children in parents’ and teachers’ temperamental reports, had a tendency to orient attention toward reward stimuli rather than punishment stimuli. Those angry children with poor attention focusing also had difficulty in moving attention away from the rewarding stimuli. These findings shed new light on our understanding of the association between anger and selective attention and suggest that they depend on the approach motivational context and functional perspective. Angry and anger-prone children do not differ from peers in their general ability to allocate attention. Instead, initial biases lead these children to preferentially focus attention on the positive and approach-related information in their environment.