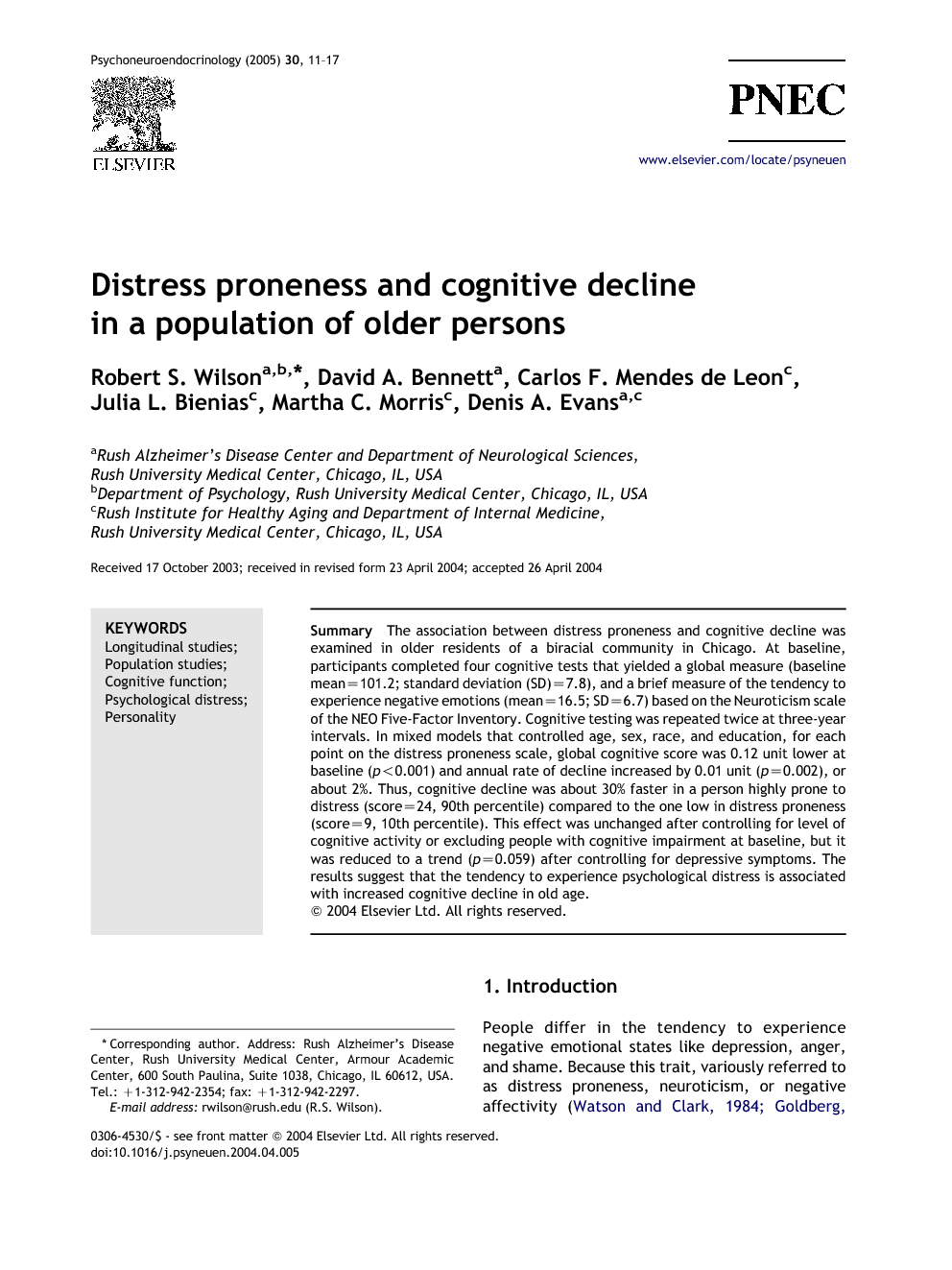 The association between distress proneness and cognitive decline was examined in older residents of a biracial community in Chicago. At baseline, participants completed four cognitive tests that yielded a global measure (baseline mean=101.2; standard deviation (SD)=7.8), and a brief measure of the tendency to experience negative emotions (mean=16.5; SD=6.7) based on the Neuroticism scale of the NEO Five-Factor Inventory. Cognitive testing was repeated twice at three-year intervals. In mixed models that controlled age, sex, race, and education, for each point on the distress proneness scale, global cognitive score was 0.12 unit lower at baseline (p<0.001) and annual rate of decline increased by 0.01 unit (p=0.002), or about 2%. Thus, cognitive decline was about 30% faster in a person highly prone to distress (score=24, 90th percentile) compared to the one low in distress proneness (score=9, 10th percentile). This effect was unchanged after controlling for level of cognitive activity or excluding people with cognitive impairment at baseline, but it was reduced to a trend (p=0.059) after controlling for depressive symptoms. The results suggest that the tendency to experience psychological distress is associated with increased cognitive decline in old age.

People differ in the tendency to experience negative emotional states like depression, anger, and shame. Because this trait, variously referred to as distress proneness, neuroticism, or negative affectivity (Watson and Clark, 1984, Goldberg, 1990 and Costa and McCrae, 1992), is very stable throughout adulthood (Costa and McCrae, 1988 and Hultsch et al., 1999), it is an indicator of the cumulative level of distress experienced by an individual (Watson and Clark, 1984, Depue and Monroe, 1986, Ormel and Wohlfarth, 1991 and Magnus et al., 1993). In this article, we use the term distress proneness because it succinctly specifies the central feature of the trait. Several lines of evidence suggest that distress proneness may contribute to cognitive decline and dementia in old age. Chronic stressful experience in animals has been associated with structural changes in neural systems that regulate the hypothalamic–pituitary–adrenal axis (e.g. hippocampus) and in forms of memory and cognition mediated by these systems (Sapolsky et al., 1985, Magarinos et al., 1997, Gould et al., 1998 and Baker and Kim, 2002). In humans, negative events across the life span have been associated with increased risk of dementia in old age (Persson and Skoog, 1996). In addition, distress proneness has been negatively associated with level of cognitive function in older persons with and without dementia (Jorm et al., 1993, Meier et al., 2002 and Wilson et al., 2004a). Prospective studies provide a more direct opportunity to observe an association between distress proneness and cognitive decline, but few have been conducted and their results have been mixed. One study found that older persons who were more prone to experience psychological distress experienced more rapid cognitive decline than persons less prone to distress during five to six years of follow-up (Wilson et al., 2003b), but the association was not observed in three other studies (Hultsch et al., 1999, Wetherell et al., 2002 and Jelicic et al., 2003). However, methodological factors like the duration of the follow-up period and the level of follow-up participation may have contributed to the null results. Another issue is that most previous studies have been conducted on selected groups of older persons, likely limiting the spectrum of distress proneness and the opportunity to detect an association between distress proneness and clinical outcomes. In the present study, we used data from the Chicago Health and Aging Project to examine the relation of a brief measure of distress proneness to cognitive decline in old age. Older residents of a biracial community on the south side of Chicago underwent cognitive function testing at three-year intervals for a mean of 5.3 years. At baseline, they completed a brief measure of distress proneness. We used mixed models to test the association of distress proneness with baseline level of cognition and annual rate of cognitive decline controlling selected demographic and clinical variables.