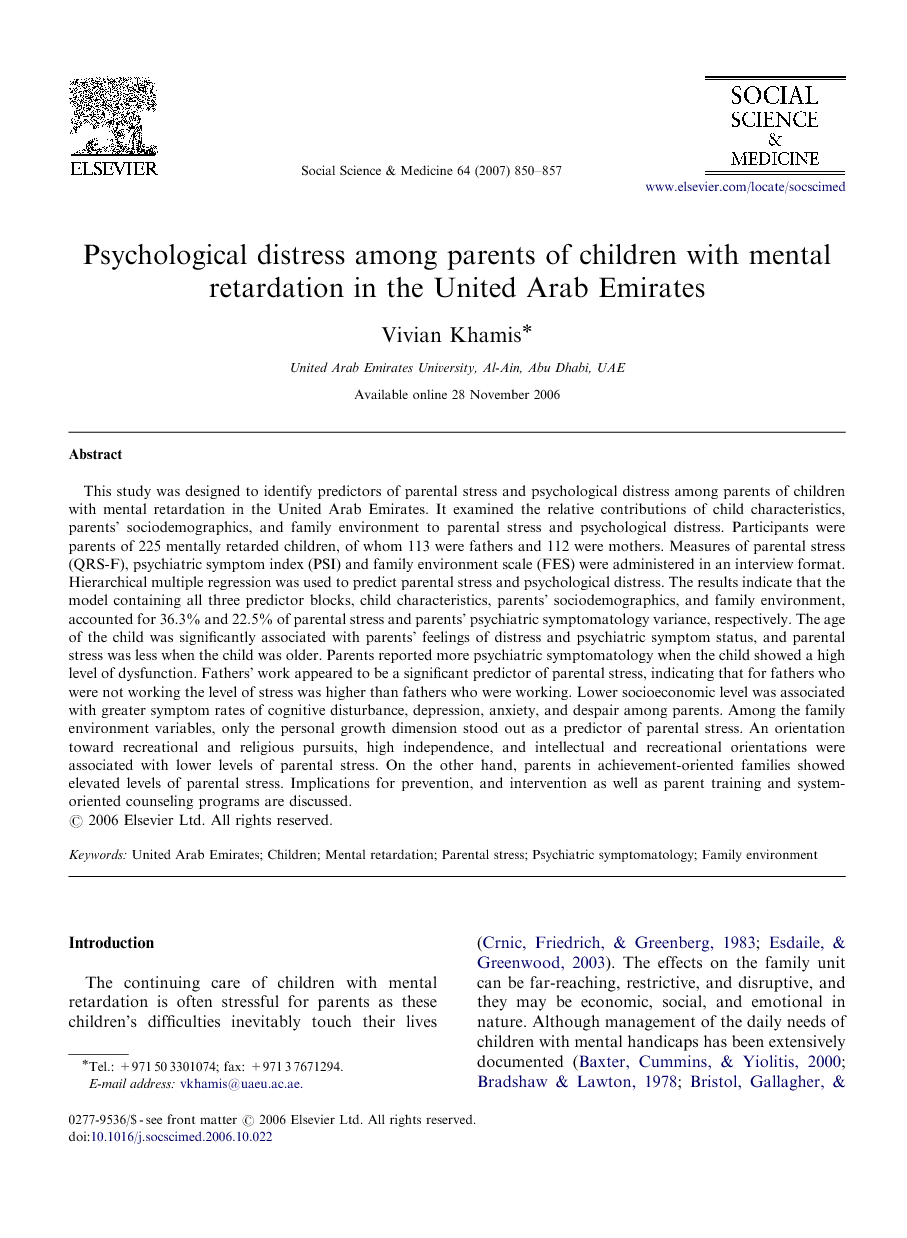 The continuing care of children with mental retardation is often stressful for parents as these children's difficulties inevitably touch their lives (Crnic, Friedrich, & Greenberg, 1983; Esdaile, & Greenwood, 2003). The effects on the family unit can be far-reaching, restrictive, and disruptive, and they may be economic, social, and emotional in nature. Although management of the daily needs of children with mental handicaps has been extensively documented (Baxter, Cummins, & Yiolitis, 2000; Bradshaw & Lawton, 1978; Bristol, Gallagher, & Holt, 1993; Butler, Gill, Pomeroy, & Fartrell, 1978; Donenberg & Baker, 1993; Hastings & Beck, 2004; Olsen, Marshall, Mandeleco, & Alferd, 1999), there exists a significant hiatus in the examination of parental stress and psychological distress among parents of children with special needs in the United Arab Emirates (UAE). Research in the area of disabilities in the UAE have focused on surveys that investigate the efficacy of the special education placement (El-Sweidi & Abu Shehab, 1995), and on teaching effectiveness of the special education teachers (Dukmak & Alghazo, 2004), however, empirical research that focuses on parents of disabled children has been non-existent. Researchers have indicated that parents of children with mental retardation are generally at risk for a variety of family life problems and emotional difficulties (Beckman, 1991; Dumas, Wolf, Fisman, & Culligan, 1991; Hanson, Ellis, & Deppe, 1989; Singer & Irvin, 1989). Paramount among their family life problems are extra caregiving demands and restrictive time demands (Beckman, 1983; Olsen et al., 1999). The cumulative impact of daily hassles and difficulties in dealing with disabled children represent significant stressors that may subsequently affect parents and family functioning (Baxter et al., 2000; Crnic et al., 1983; Duvdevany & Abboud, 2003; Esdaile & Greenwood, 2003; Singer & Irvin, 1989). In particular, a great deal of evidence points to associations between the severity or frequency of behavior problems of children with intellectual disabilities and parental stress and psychiatric problems such as depression and anxiety (e.g., Baker, Blacher, Crnic, & Edelbrock, 2002; Baxteret al., 2000; Blacher, Shapiro, Lopez, Diaz, & Fusco, 1997). Additional child characteristics such as age, and parental characteristics such as employment predict parental stress over time (e.g., Baker et al., 2003; Floyd & Gallagher, 1997; Frey, Greenberg, & Fewell, 1989; Orsmond, Seltzer, Krauss, & Hong, 2003), as do aspects of the family environment (Bristol 1987; Dyson, 1991; Moos & Moos, 2002; Willer, Intagliata, & Atkinson, 1981). Despite considerable evidence for the moderating effect of certain resources in attenuating the stress of having a child with a disability in the family, the parameters of resources may vary according to the culture and the parent. If personal and family resources are adequate to meet demands, the individual can successfully adapt (Holahan & Moos, 1987; Terry, 1991). The competence model assumes that the family environment can facilitate or hinder adaptive functioning of the parents and child (Koegel, Schreibman, O’Neill, & Burke, 1983). For this reason, current interventions advocate a family-centered approach in which professionals work with parents to help them cope with the demands and challenges of parenting a disabled child (Hallahan & Kauffman, 1997; Hardiman, Drew, & Egan, 1996). Yet, across cultures the role of the family has not been documented (Nihira, Webster, Tomiyasu, & Oshio, 1987; Nihira, Tomiyasu, & Oshio, 1988). Children with special needs in UAE Systematic attempts to educate children with disabilities in the UAE began in the early 1980s. The education of children with special needs became a matter of concern to policy makers and advocates in the UAE. Government figures show that about 2000 students are currently receiving special education in 20 centers across the seven emirates that are supervised by the Ministry of Labor and Social Welfare (UAE Department of Information Affairs, 2005). With respect to the mainstream public and private school systems, the Ministry of Education and Youth provides for children to be referred by schools and assessed by educational psychologists and speech-language pathologists, and schools to be given consultative support (Bradshaw, Tennant, & Lydiatt, 2004). The total number of children served by special education is 3129 of which 1909 are UAE citizens. Although there is no special legislation concerning people with disabilities, all children who are citizens receive free health care and education, and are ensured housing. A family also may be eligible to receive aid from the Ministry of Labour and Social Welfare for sons and daughters who are under the age of 18, unmarried, or disabled. However, because of the feelings of denial, guilt, shame and stigma surrounding families of disabled children, placement and early intervention may be delayed. Social change is beginning to take place with the establishment of the Association of Parents of Children with Disabilities, which extends its work to child's education and protection, awareness programs, social security, and social support (UAE Department of Research and Statistics, 2004). The current research investigates predictors of parental stress and psychological distress among parents of children with mental retardation in the United Arab Emirates. It examined the relative contributions of child characteristics, parents’ sociodemographics, and family environment to parents’ outcomes.