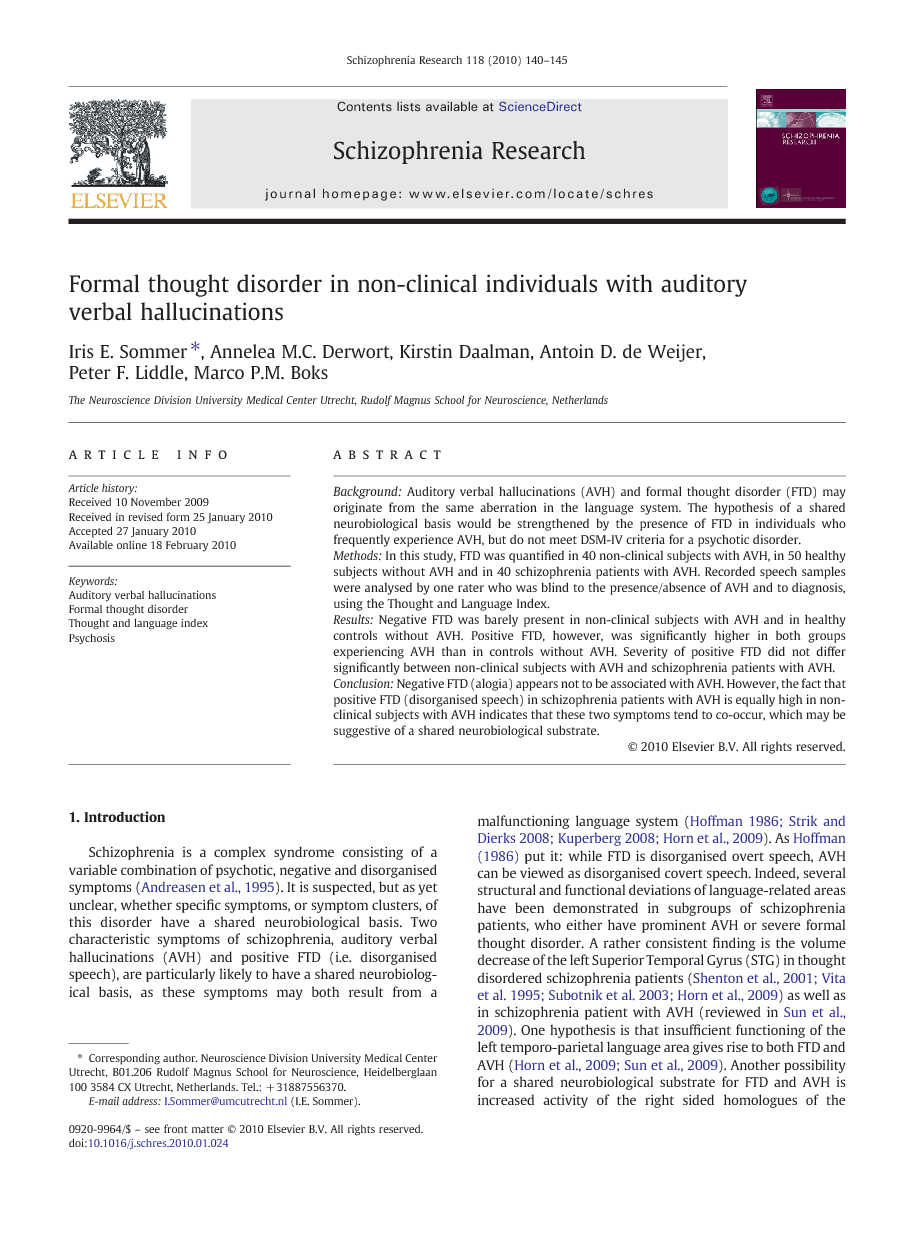 Schizophrenia is a complex syndrome consisting of a variable combination of psychotic, negative and disorganised symptoms (Andreasen et al., 1995). It is suspected, but as yet unclear, whether specific symptoms, or symptom clusters, of this disorder have a shared neurobiological basis. Two characteristic symptoms of schizophrenia, auditory verbal hallucinations (AVH) and positive FTD (i.e. disorganised speech), are particularly likely to have a shared neurobiological basis, as these symptoms may both result from a malfunctioning language system (Hoffman, 1986, Strik and Dierks, 2008, Kuperberg, 2008 and Horn et al., 2009). As Hoffman (1986) put it: while FTD is disorganised overt speech, AVH can be viewed as disorganised covert speech. Indeed, several structural and functional deviations of language-related areas have been demonstrated in subgroups of schizophrenia patients, who either have prominent AVH or severe formal thought disorder. A rather consistent finding is the volume decrease of the left Superior Temporal Gyrus (STG) in thought disordered schizophrenia patients (Shenton et al., 2001, Vita et al., 1995, Subotnik et al., 2003 and Horn et al., 2009) as well as in schizophrenia patient with AVH (reviewed in Sun et al., 2009). One hypothesis is that insufficient functioning of the left temporo-parietal language area gives rise to both FTD and AVH (Horn et al., 2009 and Sun et al., 2009). Another possibility for a shared neurobiological substrate for FTD and AVH is increased activity of the right sided homologues of the language areas (Sommer and Diederen 2009). This hypothesis is supported by functional MRI studies, which showed AVH to be associated with activity in inferior frontal and temporo-parietal areas, with a lateralization to the right hemisphere (Woodruff et al., 1995, Shergill et al., 2000, Hoffman et al., 2007 and Sommer et al., 2008a). In a similar fashion, cerebral activation during speech in patients with severe positive FTD also showed lateralization towards the right hemisphere language areas (Kircher et al., 2002). An argument against a shared biological substrate for AVH and FTD is that factor analyses of symptom clusters in schizophrenia usually place AVH in the cluster “positive symptoms” or “reality distortion” and FTD in another (usually termed “disorganisation”) (Andreasen et al., 1995 and Ruggeri et al., 2005, but see Demjaha et al., 2009). More precisely, negative FTD, i.e. the lack of spontaneous speech, clusters into the group of negative symptoms (Grube et al., 1998), while positive FTD, i.e. disorganised speech, is usually classified into the disorganised dimension (Andreasen et al., 1995). This indicates that AVH and FTD may not tend to co-occur in the same patients at the same time. However, this does not exclude the possibility that patients with AVH are at increased risk to experience FTD at another phase in their illness. For example, AVH may be most prominent in first episode psychosis, while FTD may develop at a later stage of the disease. Another possibility may be that AVH tend to be more responsive to medication than FTD, which thwarts research into the predisposition for FTD and AVH in this patient group. Another method to test the hypothesis of a shared neurobiological substrate for AVH and FTD is to measure the co-occurrence of FTD in individuals who frequently experience AVH, but do not meet DSM-IV criteria for a psychotic disorder. The University Medical Centre Utrecht recently collected data on a group of healthy individuals experiencing AVH. These subjects are free of delusions and negative symptoms and function within the normal range (Sommer et al., 2008b). In this study, we tested if sub-clinical levels of FTD are higher in non-clinical individuals with AVH than in matched subjects without AVH. For reference, a group of schizophrenia patients with AVH was also included. Recorded speech samples were analysed blind to the presence/absence of AVH and to diagnosis. Levels of FTD were quantified using a validated scale (the Thought and Language Index, Liddle et al., 2002). Increased levels of FTD in hallucinating individuals as compared to non-hallucinating subjects will be interpreted to support the hypothesis of a shared neurobiology of these two language-related sy mptoms.