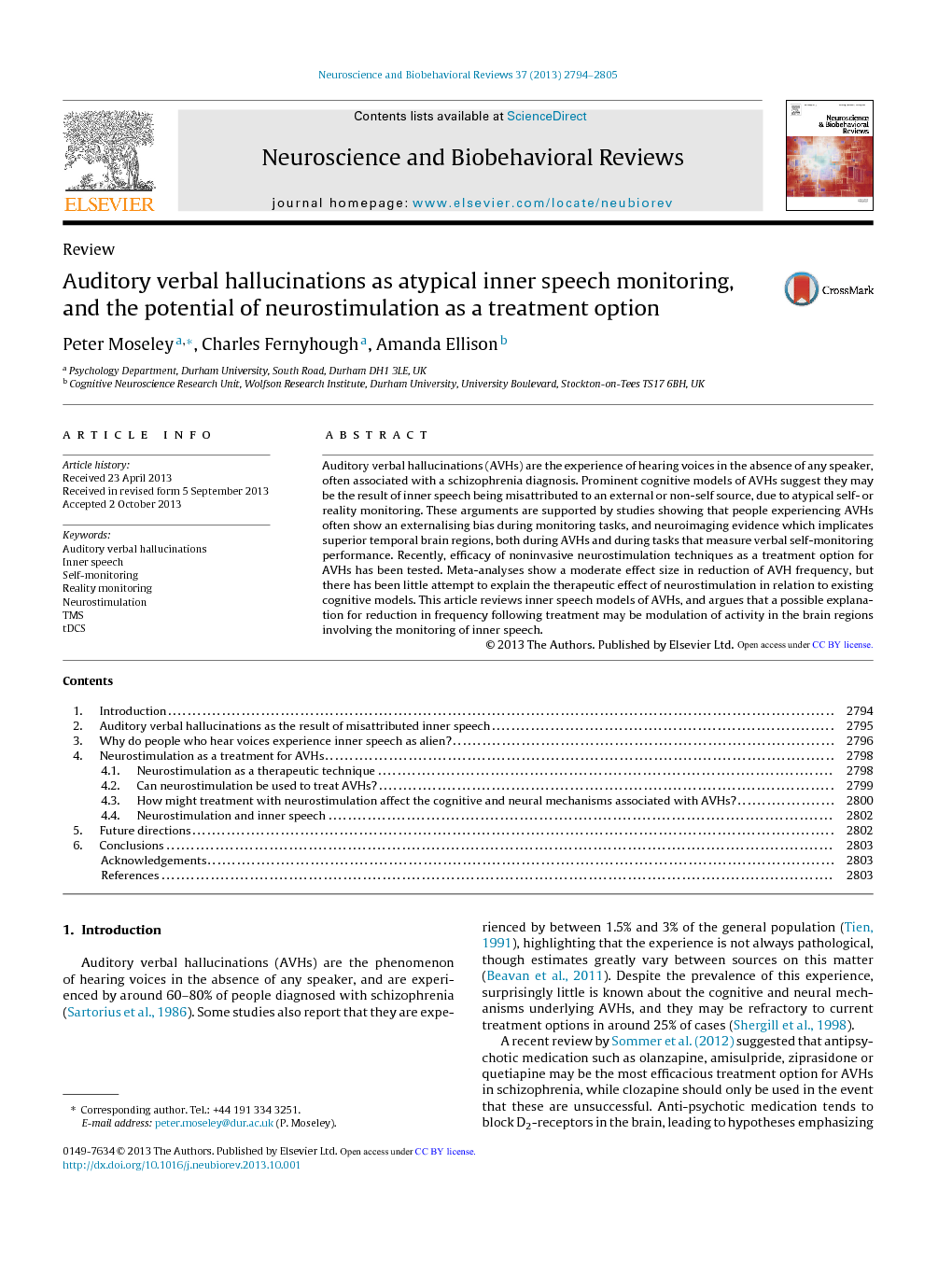 Auditory verbal hallucinations (AVHs) are the experience of hearing voices in the absence of any speaker, often associated with a schizophrenia diagnosis. Prominent cognitive models of AVHs suggest they may be the result of inner speech being misattributed to an external or non-self source, due to atypical self- or reality monitoring. These arguments are supported by studies showing that people experiencing AVHs often show an externalising bias during monitoring tasks, and neuroimaging evidence which implicates superior temporal brain regions, both during AVHs and during tasks that measure verbal self-monitoring performance. Recently, efficacy of noninvasive neurostimulation techniques as a treatment option for AVHs has been tested. Meta-analyses show a moderate effect size in reduction of AVH frequency, but there has been little attempt to explain the therapeutic effect of neurostimulation in relation to existing cognitive models. This article reviews inner speech models of AVHs, and argues that a possible explanation for reduction in frequency following treatment may be modulation of activity in the brain regions involving the monitoring of inner speech.

Auditory verbal hallucinations (AVHs) are the phenomenon of hearing voices in the absence of any speaker, and are experienced by around 60–80% of people diagnosed with schizophrenia (Sartorius et al., 1986). Some studies also report that they are experienced by between 1.5% and 3% of the general population (Tien, 1991), highlighting that the experience is not always pathological, though estimates greatly vary between sources on this matter (Beavan et al., 2011). Despite the prevalence of this experience, surprisingly little is known about the cognitive and neural mechanisms underlying AVHs, and they may be refractory to current treatment options in around 25% of cases (Shergill et al., 1998). A recent review by Sommer et al. (2012) suggested that antipsychotic medication such as olanzapine, amisulpride, ziprasidone or quetiapine may be the most efficacious treatment option for AVHs in schizophrenia, while clozapine should only be used in the event that these are unsuccessful. Anti-psychotic medication tends to block D2-receptors in the brain, leading to hypotheses emphasizing the importance of dopamine pathways in the creation of psychotic experiences (Carlsson, 1978 and Farde, 1997). However, it is well known that antipsychotic medication often causes undesirable side effects, such as weight gain and sedation (Buchanan et al., 2010). Therefore, cognitive behavioural therapy (CBT) is often used, either as an adjunctive or as an alternative treatment. The aim of CBT is to change the appraisal of the hallucination, in a collaborative effort between the patient and therapist; the patient is encouraged to take an active part in the therapy, for example, by examining evidence for and against distressing beliefs, and testing explanations for unusual experiences in real world situations (Jones et al., 2012). One meta-analysis reported an effect size of 0.4 for a reduction in positive symptoms of schizophrenia (Wykes et al., 2008), although this does not tell us specifically about CBT's efficacy in treating AVHs. These studies are also confounded by whether the patients included were taking anti-psychotic medication at the time of therapy; it is difficult to know whether any effects were due to the use of CBT alone. The search for new treatment options for AVHs has led to the testing of the efficacy of noninvasive neurostimulation techniques in the treatment of AVHs. Although results have not been conclusive, repetitive pulse transcranial magnetic stimulation (rTMS) was recently labelled as “potentially useful” in a summary of available treatment options (Sommer et al., 2012, p. 7), and recent research has used transcranial direct current stimulation (tDCS), with promising results (Brunelin et al., 2012). Additionally, neurostimulation techniques, if indeed efficacious, have the potential to tell us much about the cognitive and neural mechanisms underlying AVHs, by targeting specific brain regions thought to be involved in the experience (although it also affects brain regions other than those directly underneath the stimulating coil or electrode; e.g. Kindler et al., 2013). There has so far been little attempt to explain the therapeutic effects of neurostimulation (if not a placebo effect) in relation to pre-existing cognitive or neuroscientific models of AVHs. The most popular cognitive theory of AVHs is arguably that many are the result of internal cognitive events, such as inner speech, being misattributed to an external or alien source (Waters et al., 2012a). Various models have suggested that this could be due to a specific deficit in the monitoring of one's own actions, known as self-monitoring (Frith, 1992), and/or due to a bias towards labelling internal mental events as externally produced under conditions of ambiguity, known as a bias in reality monitoring (Bentall and Slade, 1985). Evidence from neuroimaging suggests that monitoring of one's own speech, overt or covert, is related to activity in auditory cortical regions such as the lateral temporal lobe, including the superior temporal gyri (STG), a brain area that includes both primary and secondary auditory cortices (Allen et al., 2007 and McGuire et al., 1996a). This corresponds well to ‘symptom-capture’ studies of AVHs, in which similar areas are often implicated (Allen et al., 2008). rTMS treatment is usually targeted at the left temporoparietal junction (TPJ), an area adjacent to, and with high levels of connectivity to, primary and secondary auditory cortex (Kindler et al., 2013). Therefore, it is possible that neurostimulation treatment affects brain regions involved in verbal self- or reality monitoring. This review will discuss models that implicate atypical monitoring of inner speech, as well as the evidence surrounding the efficacy of neurostimulation as a treatment for AVHs, and the possible cognitive and neural mechanisms behind the therapeutic effect.