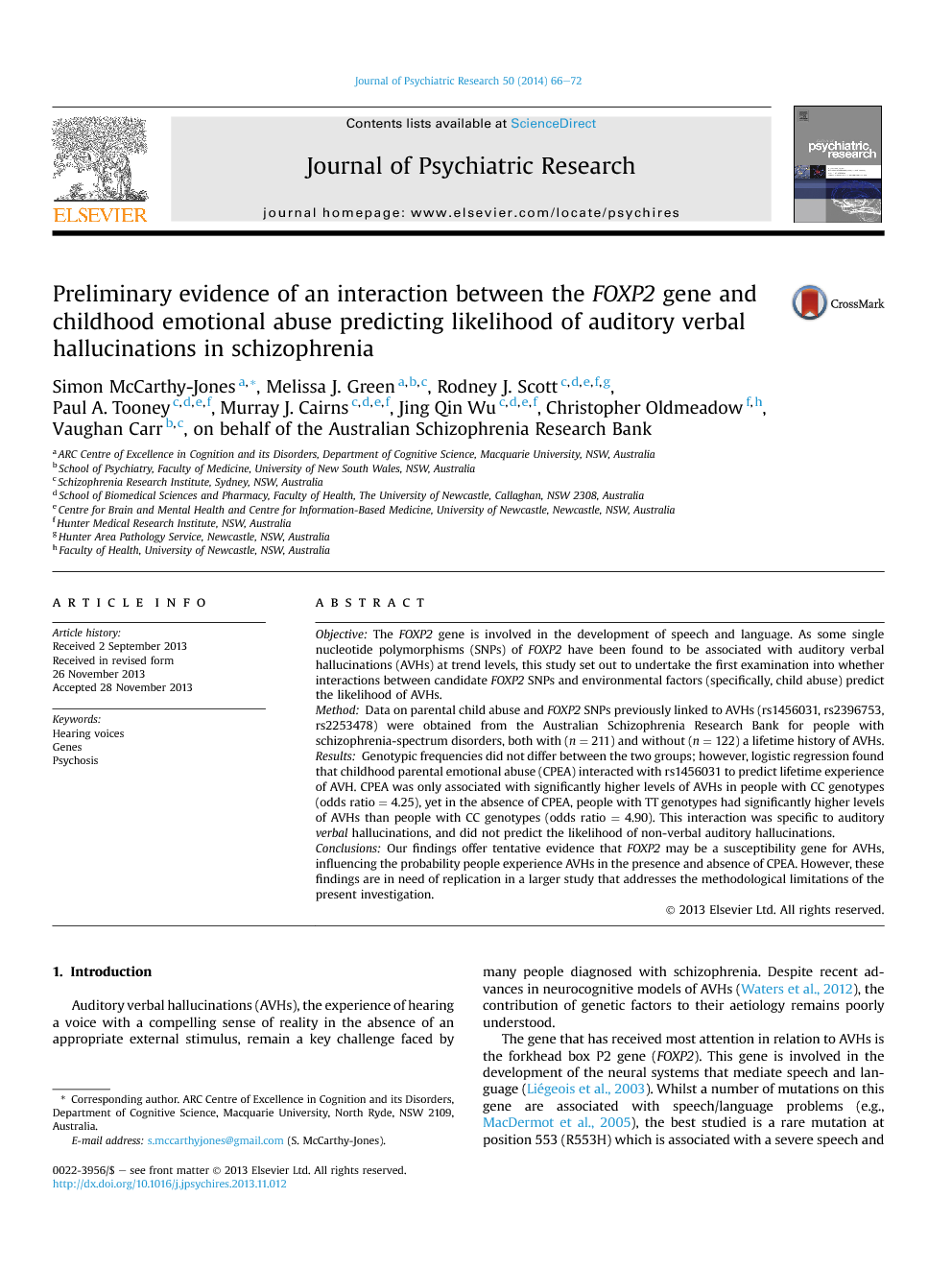 The FOXP2 gene is involved in the development of speech and language. As some single nucleotide polymorphisms (SNPs) of FOXP2 have been found to be associated with auditory verbal hallucinations (AVHs) at trend levels, this study set out to undertake the first examination into whether interactions between candidate FOXP2 SNPs and environmental factors (specifically, child abuse) predict the likelihood of AVHs. Method Data on parental child abuse and FOXP2 SNPs previously linked to AVHs (rs1456031, rs2396753, rs2253478) were obtained from the Australian Schizophrenia Research Bank for people with schizophrenia-spectrum disorders, both with (n = 211) and without (n = 122) a lifetime history of AVHs. Results Genotypic frequencies did not differ between the two groups; however, logistic regression found that childhood parental emotional abuse (CPEA) interacted with rs1456031 to predict lifetime experience of AVH. CPEA was only associated with significantly higher levels of AVHs in people with CC genotypes (odds ratio = 4.25), yet in the absence of CPEA, people with TT genotypes had significantly higher levels of AVHs than people with CC genotypes (odds ratio = 4.90). This interaction was specific to auditory verbal hallucinations, and did not predict the likelihood of non-verbal auditory hallucinations. Conclusions Our findings offer tentative evidence that FOXP2 may be a susceptibility gene for AVHs, influencing the probability people experience AVHs in the presence and absence of CPEA. However, these findings are in need of replication in a larger study that addresses the methodological limitations of the present investigation. Keywords Hearing voices; Genes; Psychosis

Auditory verbal hallucinations (AVHs), the experience of hearing a voice with a compelling sense of reality in the absence of an appropriate external stimulus, remain a key challenge faced by many people diagnosed with schizophrenia. Despite recent advances in neurocognitive models of AVHs (Waters et al., 2012), the contribution of genetic factors to their aetiology remains poorly understood. The gene that has received most attention in relation to AVHs is the forkhead box P2 gene (FOXP2). This gene is involved in the development of the neural systems that mediate speech and language ( Liégeois et al., 2003). Whilst a number of mutations on this gene are associated with speech/language problems (e.g., MacDermot et al., 2005), the best studied is a rare mutation at position 553 (R553H) which is associated with a severe speech and language disorder ( Lai et al., 2001). Sanjuan et al. (2006) have argued that AVHs may also be seen as a “disorder of speech” (p. 67), and that common variants on the FOXP2 may therefore play a causal role in the development of AVHs. Although the biological mechanism of any emerging relationship between common FOXP2 single nucleotide polymorphisms (SNPs) and AVHs is underdeveloped, there are a number of reasons for predicting such a relationship. Firstly, the R553H mutation is associated with grey matter alterations in regions implicated in AVHs, including the left inferior frontal gyrus (IFG) and the superior temporal gyrus (STG) bilaterally (Watkins et al., 2002). Reduced STG volumes are associated with greater AVH severity (Palaniyappan et al., 2012) and both the STG and left IFG are functionally activated during AVHs (Jardri et al., 2011). Secondly, R553H has been linked to increased grey matter in the putamen (Watkins, et al., 2002), a region involved in spontaneous language generation, also implicated in AVHs (Hoffman and Hampson, 2012). Finally, this FOXP2 mutation is also associated with reduced left lateral IFG activation during both overt and covert word production ( Liégeois et al., 2003). This fits well with the finding that reduced lateralisation of the language system is associated with AVHs ( Ocklenburg et al., 2013). The proposal that common FOXP2 SNPs may have similar, although less drastic, effects to those of the rare R553H mutation, due to the downstream pathways regulated by the FOXP2 gene ( Fisher and Scharff, 2009), can hence lead to the hypothesis that common FOXP2 SNPs may increase the likelihood of AVHs. The first study of FOXP2 SNPs and AVHs compared allele frequencies of FOXP2 SNPs rs923875 and Intron3a between 149 people with schizophrenia/schizoaffective diagnoses with AVHs, and 137 healthy controls; no differences in genotype distributions or allele frequencies were found and there were no differences in AVH severity associated with these polymorphisms ( Sanjuan et al., 2005). A later study compared the allele frequencies of ten FOXP2 SNPs among 186 people diagnosed with schizophrenia with AVHs, and 160 healthy controls ( Sanjuan et al., 2006). This found significantly different allele frequencies of rs2396753 between the groups, and a trend towards differences in the genotype distribution of both rs2396753 and rs1456031. However, both these studies employed a non-psychiatric comparison group, leaving open the possibility that group differences could be due to other factors associated with schizophrenia apart from AVHs. A more recent study ( Tolosa et al., 2010) addressed this limitation by examining twenty-seven FOXP2 SNPs in 293 people diagnosed with schizophrenia, and then comparing patients with AVHs (n = 77), and without AVHs (n = 215). Although there were initial group differences in both genotype distributions and allele frequency for rs2396753 (AA genotype and A allele more common in patients with AVHs), and genotype distributions for rs2253478 (GA genotype more common in patients with AVHs) and rs1456031 (CC genotype more common in patients with AVHs), these did not remain significant after correcting for multiple comparisons. One potential reason for the lack of significant differences in genotype frequency among patients with and without AVHs is that FOXP2 may exert its role in producing AVHs according to hitherto unidentified gene-environment interactions. Such interactions are becoming of increasing interest in schizophrenia research ( Van Os et al., 2008). One way to conceive of this idea in the current context is that vulnerability to AVHs could be provided by the inheritance of a specific FOXP2 variant, with additive (environmental) stressors being necessary for AVHs to manifest. Alternatively, FOXP2 may be especially vulnerable to environmental modulation, such that individual variation among FOXP2 SNPs would make some people particularly susceptible to the presence (and/or absence) of stressors that likely interact with all genotypes (i.e., the interactions are not restricted to a perceived “risk” genotype; Belsky et al., 2009). A candidate environmental stressor for such an interaction is one already shown to be associated with AVHs, namely child abuse, with substantial evidence already demonstrating a relationship between AVHs and a range of forms of child abuse, including sexual ( Bentall et al., 2012 and McCarthy-Jones, 2011), physical ( Bentall et al., 2012 and Read et al., 2003) and emotional abuse ( Daalman et al., 2012), as well as neglect ( Varese et al., 2012). Since not all child abuse results in AVHs, variations in FOXP2 genotypes may be one factor in determining who goes onto develop AVHs following such abuse in childhood. We therefore hypothesised that the three FOXP2 SNPs (rs2253478, rs2396753, rs1456031), found previously to be associated with AVHs at trend level by Tolosa et al. (2010), would interact with child abuse experiences to predict the presence of AVHs.