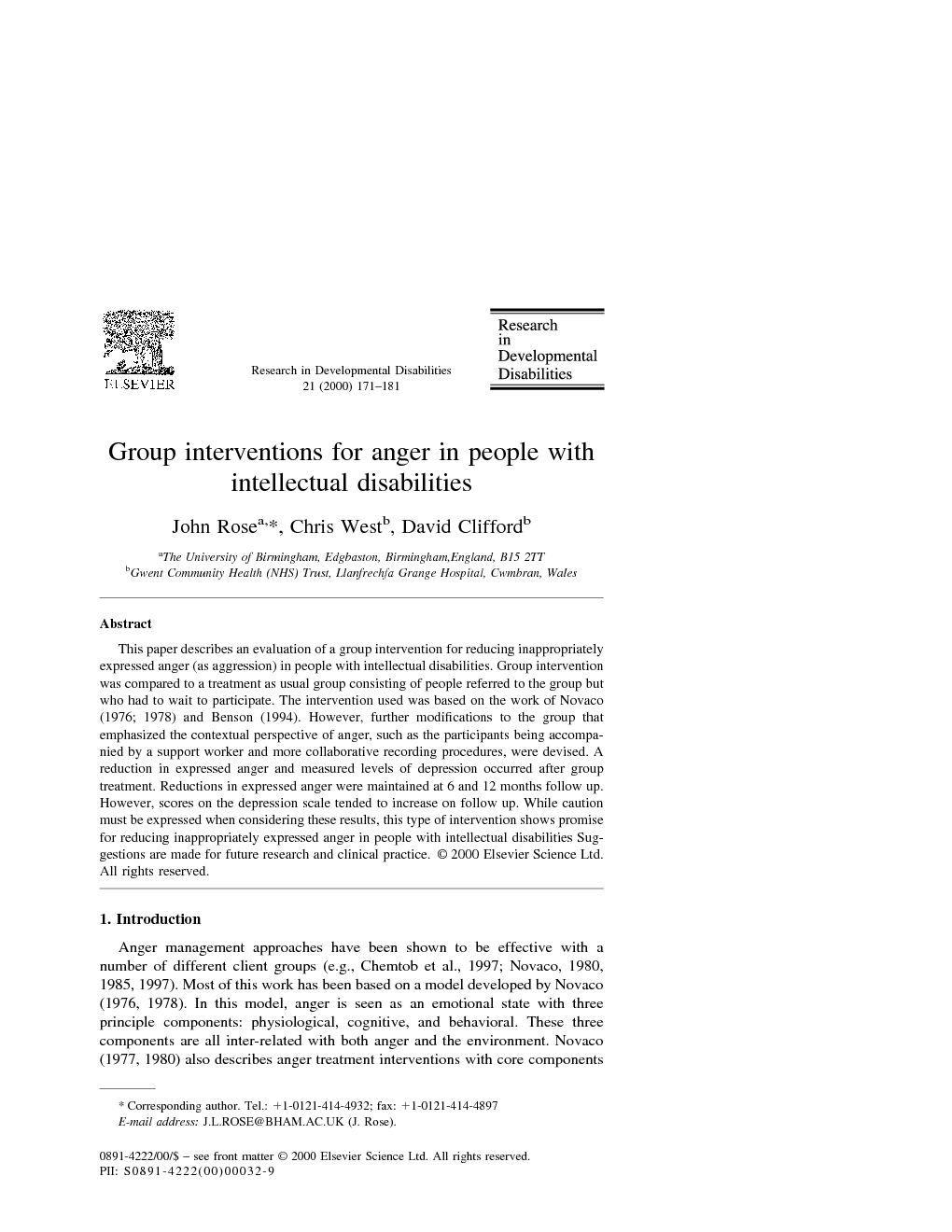 This paper describes an evaluation of a group intervention for reducing inappropriately expressed anger (as aggression) in people with intellectual disabilities. Group intervention was compared to a treatment as usual group consisting of people referred to the group but who had to wait to participate. The intervention used was based on the work of Novaco 1976 and Novaco 1978) and Benson (1994). However, further modifications to the group that emphasized the contextual perspective of anger, such as the participants being accompanied by a support worker and more collaborative recording procedures, were devised. A reduction in expressed anger and measured levels of depression occurred after group treatment. Reductions in expressed anger were maintained at 6 and 12 months follow up. However, scores on the depression scale tended to increase on follow up. While caution must be expressed when considering these results, this type of intervention shows promise for reducing inappropriately expressed anger in people with intellectual disabilities Suggestions are made for future research and clinical practice.

Anger management approaches have been shown to be effective with a number of different client groups (e.g., Chemtob et al 1997, Novaco 1980, Novaco 1985 and Novaco 1997). Most of this work has been based on a model developed by Novaco 1976 and Novaco 1978). In this model, anger is seen as an emotional state with three principle components: physiological, cognitive, and behavioral. These three components are all inter-related with both anger and the environment. Novaco 1977 and Novaco 1980) also describes anger treatment interventions with core components of cognitive restructuring, arousal reduction, and behavioral skills training. A differentiation between anger management and treatment has recently been clearly articulated (e.g., Novaco et al., 2000). Anger management is seen as a psycho-educational approach that is less treatment intensive than anger treatment. Anger treatment explicitly integrates assessment with treatment and centrally involves substantial cognitive restructuring and the acquisition of arousal reduction and behavioral coping skills. An important development in anger treatment over recent years has been a greater emphasis on a contextual perspective of anger, which may involve distal or ambient determinants Black et al 1997 and Novaco 1993. As a result, Novaco (1993) suggests that clinicians should pay more attention to the “contextual perspective that addresses its emergence within a fabric of physical, temporal and sociocultural milieu.” The group described in this paper is based on the procedures described by Benson (1994), with some modifications and developments which attempted to recognize the importance of enduring features of the environment within the lives of the participants. Studies have shown that some of the theoretical approaches and techniques used in anger management and treatment are potentially useful for people with intellectual disabilities Benson et al 1986, Black et al 1997 and Rose 1996. However, reports have tended to concentrate on case studies or small groups with a relatively short follow up period (if any) and no control group. A number of successful case studies have been reported in the literature (e.g., Black and Novaco 1993 and Murphy 1991). For example, Black and Novaco (1993) successfully treated a man with intellectual disabilities who had been both verbally and physically aggressive and was living in a secure setting. Treatment gains were transferred when the man moved to the community. One of the first group studies was conducted by Benson et al. (1986) who compared four conditions: relaxation training, self instructional training, problem solving, and a multicomponent condition. Significant reductions in measures of anger were noted, but with no significant differences between groups. It was also difficult to judge efficacy, as there was no true control group. Benson 1992 and Benson 1994) has subsequently developed her work to describe a treatment manual that also includes procedures for developing emotional recognition in participants. Rose (1996) describes a group based on the work of Benson, but adapted for people with more severe disabilities. Rose (1996) reports that the clinical use of cognitive techniques appeared to be relatively ineffective when compared to the behavioral elements of the treatment used. However, a systemic element was also introduced by inviting care staff to participate in groups with individuals with whom they worked. A reduction in aggressive behavior was found for all five participants who completed the treatment both over the course of the group and at 3 months follow up. However, this was a relatively small group with no control group and a relatively short follow-up period. Another similar group is described by Moore et al. (1997) which was evaluated positively both by participants and the staff who accompanied them. However, no control group or follow up was reported. Until recently, the assessment of anger in people with intellectual disabilities has represented a considerable challenge for researchers. There has been some consideration as to whether people with intellectual disabilities can report their emotional states accurately. This situation is further complicated when attention is focused on the emotion of anger. Anger can be viewed as an adaptive response to some situations however, difficulties arise when it leads to aggression Novaco 1979 and Benson 1992.