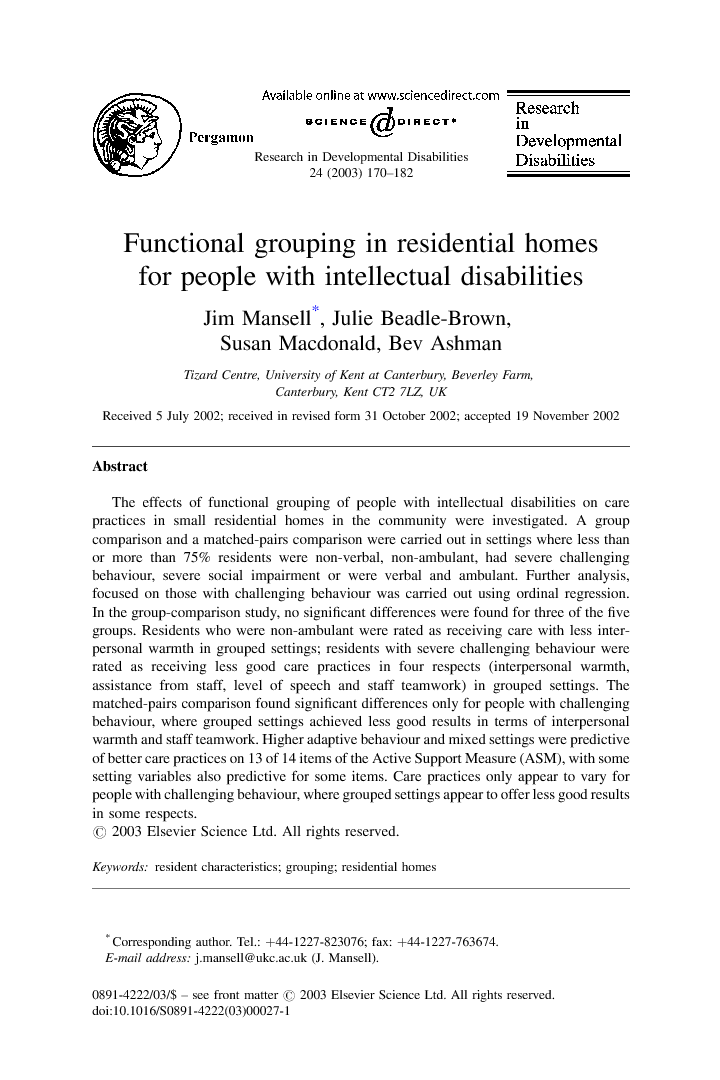 The effects of functional grouping of people with intellectual disabilities on care practices in small residential homes in the community were investigated. A group comparison and a matched-pairs comparison were carried out in settings where less than or more than 75% residents were non-verbal, non-ambulant, had severe challenging behaviour, severe social impairment or were verbal and ambulant. Further analysis, focused on those with challenging behaviour was carried out using ordinal regression. In the group-comparison study, no significant differences were found for three of the five groups. Residents who were non-ambulant were rated as receiving care with less interpersonal warmth in grouped settings; residents with severe challenging behaviour were rated as receiving less good care practices in four respects (interpersonal warmth, assistance from staff, level of speech and staff teamwork) in grouped settings. The matched-pairs comparison found significant differences only for people with challenging behaviour, where grouped settings achieved less good results in terms of interpersonal warmth and staff teamwork. Higher adaptive behaviour and mixed settings were predictive of better care practices on 13 of 14 items of the Active Support Measure (ASM), with some setting variables also predictive for some items. Care practices only appear to vary for people with challenging behaviour, where grouped settings appear to offer less good results in some respects.

In a paper entitled “The less you’ve got the less you get: functional grouping, a cause for concern” Raynes (1980) commented that grouping people with intellectual disabilities who share similar characteristics in residential settings had negative effects on their care. She showed that the most severely disabled residents in her study received more institutional care practices, less stimulating speech from staff, less community involvement and a poorer physical environment. She argued that these differences were not all functionally related to the nature of resident disabilities, and concluded that “… for severely mentally retarded individuals, homogenous functionally based groupings appear to generate an environment in which direct-care staff consistently provide care which is characteristically unstimulating, undifferentiated, depersonalized, and rigid”. Instead, Raynes argued that research should be carried out on environments in which people with different needs and characteristics lived together. She acknowledged that there might be disadvantages of such arrangements but suggested that this should be empirically investigated. Raynes’ data were of course derived from institutional settings; in the succeeding 20 years these have been substantially replaced by small-scale housing, with staff support, based in the community (Mansell & Ericsson, 1996). Predominantly, these services provide much richer environments, with much higher staffing levels, and espouse much more individualised care practices. Nevertheless, they typically group people together (albeit in much smaller groups than in institutions). Sometimes functional grouping in community settings reflects an explicit attempt to provide specially tailored support and care for individuals with similar needs. Here the evidence for relative effectiveness is mixed. For example, Hatton, Emerson, Robertson, and Henderson (1995) found that specialised group homes for people with intellectual disabilities who also had sensory impairments achieved better results than “ordinary” homes in which people with comparable needs lived with other people with intellectual disabilities. Emerson, Beasley, Offord, and Mansell (1992) found that homes which grouped people who had very severe challenging behaviour achieved no improvement in client outcomes over institutional care and Mansell (1995) found that specialised placements in “mixed” homes achieved better results than grouped settings. However, functional grouping also occurs in community-based services without special labels. This finding may reflect the belief of case managers and providers that homes which group people together on the basis of some shared characteristic will provide better quality care. These data may also reflect the common practice of leaving the most disabled residents in institutions until last, so that the only available residents for new services in the community are all very disabled. Since there is evidence of cost reduction over time in community-based services, without commensurate gains in client adaptive behaviour (Cambridge, Hayes, Knapp, Gould, & Fenyo, 1994), it may also reflect the interaction of individual case management and downward pressure on residential costs leading to decisions to place people with less complex needs in less expensive services which can only serve such people. This approach leaves the most disabled in care settings which are de facto functionally grouped.