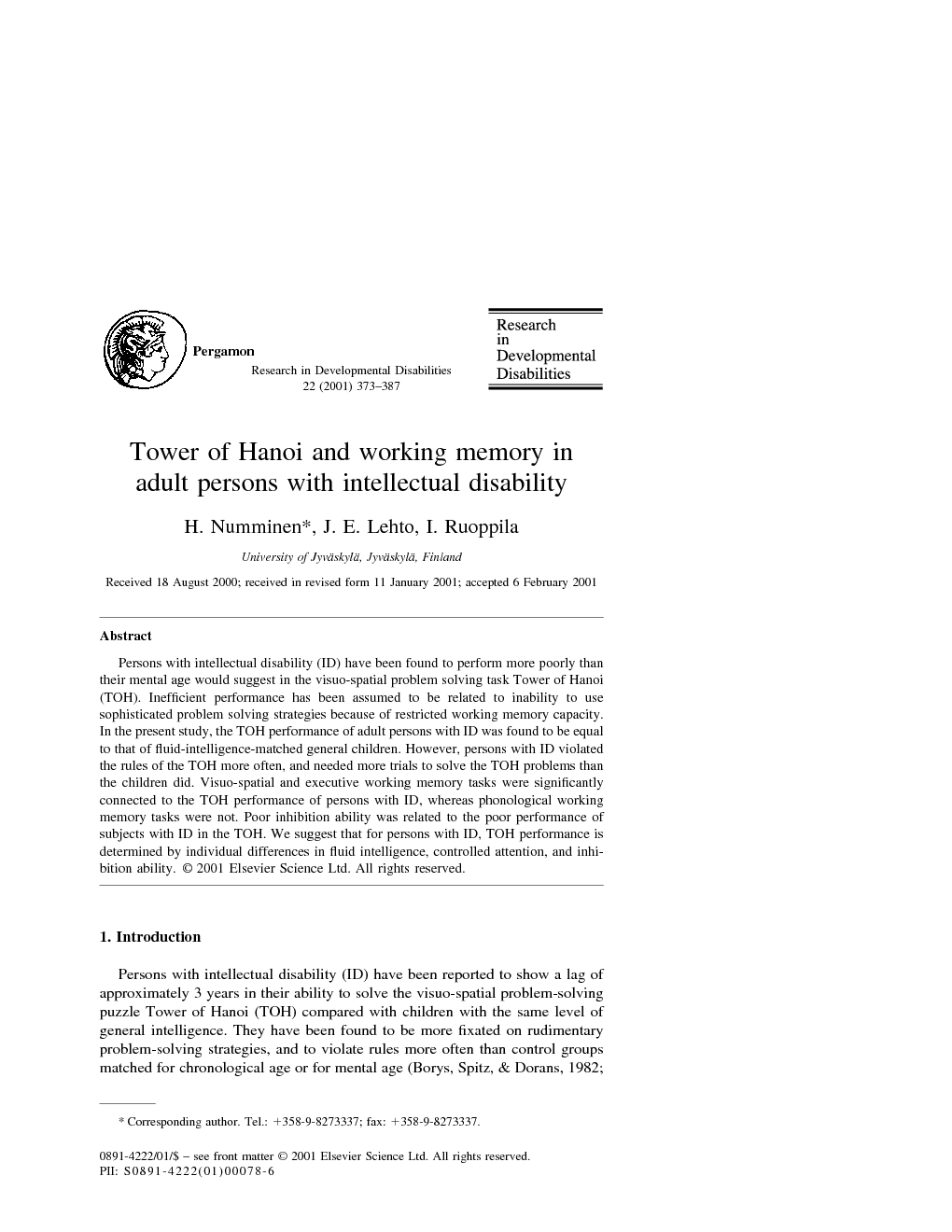 Persons with intellectual disability (ID) have been reported to show a lag of approximately 3 years in their ability to solve the visuo-spatial problem-solving puzzle Tower of Hanoi (TOH) compared with children with the same level of general intelligence. They have been found to be more fixated on rudimentary problem-solving strategies, and to violate rules more often than control groups matched for chronological age or for mental age Borys et al 1982, Byrnes and Spitz 1977 and Spitz et al 1982. This restriction to unsophisticated strategies has been assumed to result from a limited depth-of-search capacity which, in turn, has been assumed to be related to a deficiency in working memory (WM) capacity Borys et al 1982 and Spitz et al 1982. But to date, no empiric study has actually demonstrated the connection. In the TOH, participants are asked to move disks from peg to peg in order to achieve the target configuration in a limited number of moves, while simultaneously obeying certain rules. In general populations, the TOH and its variant, the Tower of London (Shallice, 1982) have been used as measures of problem-solving ability (e.g., Anzai and Simon 1979, Simon 1975 and Welsh et al 1995), developmental level (e.g., Klahr and Robinson 1981 and Piaget 1976), and executive function capacity (e.g., Lehto et al submitted, Levin et al 1991, Morris et al 1997 and Shallice 1982). The ability to solve the TOH problems has been presumed to be determined by fluid intelligence (e.g., Duncan, Burgess, & Emslie, 1995), WM capacity (e.g., Welsh 1991 and Welsh et al 1995), inhibition ability (e.g., Miyake et al 2000 and Morris et al 1997), or the ability for attentional control (Shallice, 1982). Despite the incoherent terminology, all the cognitive processes related to the TOH, according to modern neuropsychological tradition, reflect so-called executive functions (see Burgess, 1997, for a review). As lower-order cognitive skills, such as visuo-motor co-ordination, or spatial processing have been thought to have little impact on TOH performance (Shallice, 1982), the TOH has been generally assumed to be an executive task. The concept of “executive functions” embraces a range of cognitive skills; but the present study is restricted to an evaluation of the relationship between the TOH and WM. Although many researchers using general populations (e.g., Welsh et al., 1995) have suggested a close connection between the TOH and WM, empiric evidence is missing. One of the best-known theories in relation to the tower-tasks is the WM framework proposed by Baddeley and Hitch (1974). It describes WM as a multi-componential system consisting of executive WM, that reflects controlled attention (e.g., Baddeley & Della Sala, 1996), and cognitive processes crucial for the TOH (Shallice, 1982). At least two subordinate “slave” components, phonological, and visuo-spatial WM, are responsible for more restricted short-term storage and processing of domain-specific information Baddeley 1986 and Baddeley and Hitch 1974. Many previous studies of the TOH have, in contrast to the tripartite WM framework, employed the North American theory of WM capacity (e.g., Just & Carpenter, 1992) both in ID, Borys et al 1982 and Spitz et al 1982, and in general populations (Welsh et al., 1995). There appears to be, however, widespread agreement that executive WM and the WM capacity are broadly equivalent (e.g., Baddeley 1996 and Just and Carpenter 1992). It has been suggested that the ability to solve executive tasks evolves through huge developmental increments (Levin et al., 1991). In the Tower of London task, the largest gains have been found to occur between the ages of 7 and 9 and again between 11 and 12 (Anderson, Anderson, & Lajoie, 1996). The developmental changes are thought to reflect an increased capacity for subgoal planning which, in turn, is supposed to be related to an increase in WM capacity (e.g., Welsh, 1991). But the way in which these changes are related to the qualitative features of WM development is as yet imperfectly understood. Engle et al. (1999) have recently proposed that although any task involving controlled processes (such as goal maintenance, conflict resolution, resistance to or suppression of distracting information, error monitoring) requires executive WM involvement, automatic processes are likely to replace the need for controlled attention in the course of time. As a result, the need for executive WM involvement is lessened. The current study was motivated by two considerations. Firstly, although several studies of ID and the general population have suggested a close relationship between the TOH and WM, empiric studies of this relationship are lacking. Secondly, since executive functions have been found to be deficient in nearly all developmental disorders (Pennington, Bennetto, McAleer, & Roberts, 1996), the analysis of executive tasks may reveal developmental impairment typical of developmental disorders such as ID. In Study 1, TOH performance as well as its connections to WM were evaluated in adult persons with ID, and compared to normally developing children with an equivalent level of fluid intelligence. In Study 2, the relationship between TOH performance and WM was further evaluated using a larger battery of WM tasks in a larger group of adult persons with ID. 2. Study 1 2.1. Method 2.1.1. Participants A total of 24 volunteer subjects with ID (ID Group) (14 men and 10 women) were selected from a population-based sample of persons with ID (n = 253), all of whom were participants in an ongoing longitudinal study begun in 1962 (see Numminen et al., 2000). Participants were selected using the following criteria: 1) diagnosis of idiopathic ID, 2) IQ between 35 and 70, 3) chronological age under 60 years, 4) ability to follow test instructions, 5) ability to communicate verbally, 6) ability to see and hear adequately, 7) absence of acute psychiatric disorders and severe neurological symptoms, and 8) high level of everyday functioning operationalised as noninstitutional living. Participants in the ID Group were matched by their individual raw scores on Raven’s Colored Matrices test (Raven, 1956) to normally developing boys (n = 13) and girls (n = 11) from 3 to 6 years of age (Child Group). The children were recruited from a local day-care center.