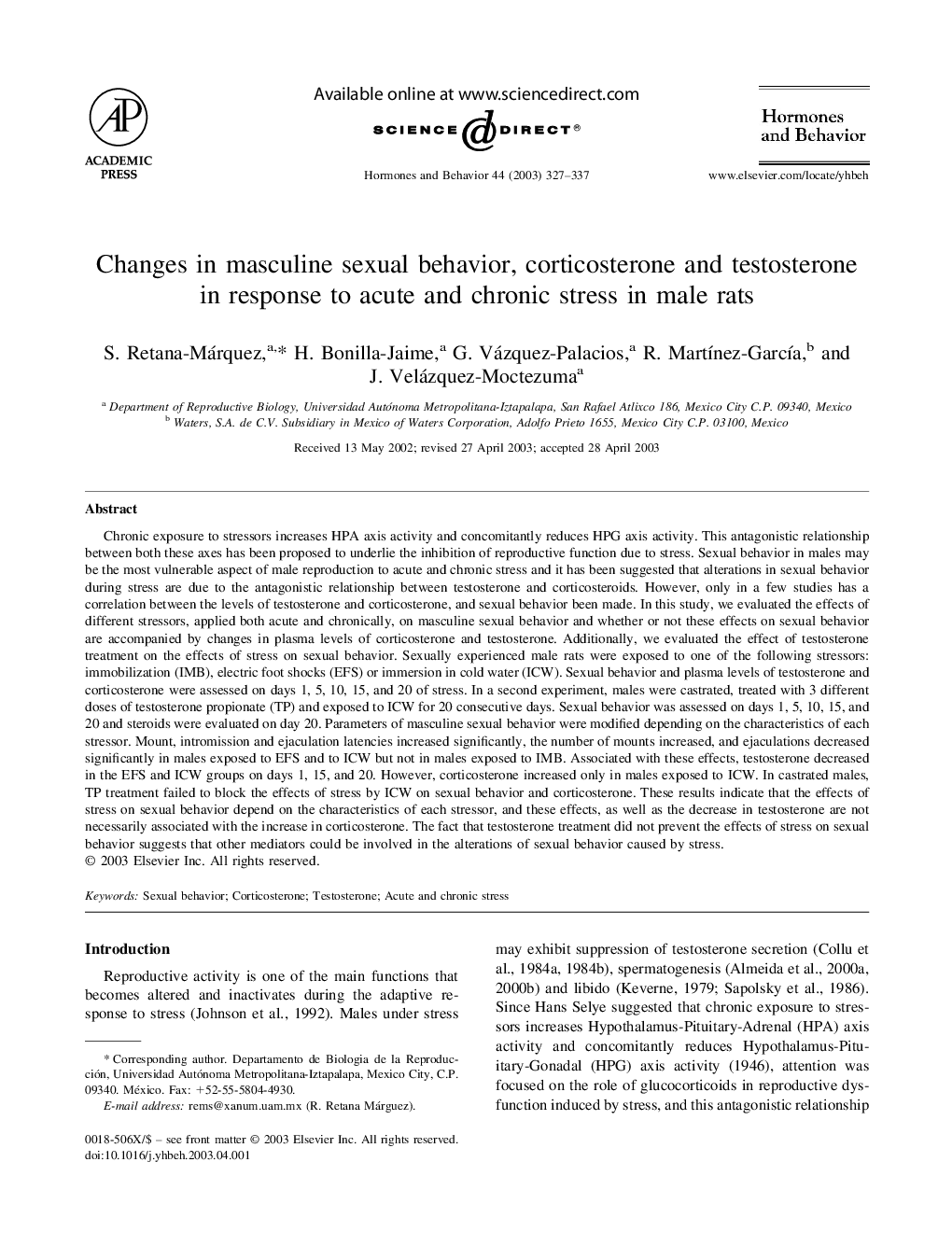 Introduction Reproductive activity is one of the main functions that becomes altered and inactivates during the adaptive response to stress (Johnson et al., 1992). Males under stress may exhibit suppression of testosterone secretion Collu et al., 1984a and Collu et al., 1984b, spermatogenesis Almeida et al., 2000a and Almeida et al., 2000b and libido Keverne, 1979 and Sapolsky et al., 1986. Since Hans Selye suggested that chronic exposure to stressors increases Hypothalamus-Pituitary-Adrenal (HPA) axis activity and concomitantly reduces Hypothalamus-Pituitary-Gonadal (HPG) axis activity (1946), attention was focused on the role of glucocorticoids in reproductive dysfunction induced by stress, and this antagonistic relationship between glucocorticoids and gonadal hormones has been consistently observed. Studies in rats, mice and humans have shown that acute exposure (from seconds to a few hours) to stressors such as immobilization (Torrellas et al., 1981), electric foot shocks (Rivest and Rivier, 1991), cold, ether (Lesniewska et al., 1990), exercise (Elias et al., 1991), food restriction (De Boer et al., 1989), or to situations that cause anxiety in males (Schedlowsky et al., 1995), is characterized by an increase in corticotropin releasing hormone (CRH), adrenocorticotropin (ACTH), β-endorphins and corticosterone (in rodents) or cortisol (in humans). Conversely, acute stress by immobilization decreases serum levels of luteinizing hormone (LH) and testosterone Sapolsky et al., 1986 and Norman and Smith, 1992 in rabbits, macaques, and baboons. In hamsters (Tsuchiya and Horii, 1995a) and humans (Yap et al., 1996), acute stress does not modify testosterone or, can either decrease plasma LH and testosterone Tsopanakis and Tesseromatis, 1991 and Reiner et al., 1987 or increase testosterone Oka and Hirano, 1987 and Wheeler et al., 1994. In intact rats, acute exposure to stress by noise or water immersion (Armario et al., 1986), immobilization (López-Calderón et al., 1990), cold (Lennox et al., 1980), hot (Siegel et al., 1981), light (Armario and Castellanos, 1984) or surgery (Frankel and Ryan, 1981), stimulates the HPG axis, increasing LH and follicle stimulating hormone (FSH), prolactin, and testosterone levels in the plasma of stressed males. On the other hand, chronic stress by immobilization Collu et al., 1984a, Collu et al., 1984b and González-Quijano et al., 1991, intermittent electric foot shocks (Ishikawa et al., 1992), prolonged exercise (Watanabe et al., 1991), constant illumination (Persengiev et al., 1991), forced swimming in cold water (Bidzinska et al., 1993), noise, fasting (De Boer et al., 1989), surgery (Gray et al., 1978), crowding and social stress Mormède et al., 1990 and Monder et al., 1994 in rats, causes a decrease in hypothalamic CRH content, an increase in plasma levels of ACTH and glucocorticoids, as well as a general inhibitory effect on HPG axis, through decreasing LH and testosterone. The same has been observed in hamsters (Tsuchiya and Horii, 1995b). In men, prolonged physical stress due to exercise (Remes et al., 1985) or military training (Opstad, 1994), as well as sleep deprivation (Remes et al., 1985), increases plasma levels of cortisol, with a concomitant decrease in testosterone. It is well known that an adequate display of masculine sexual behavior depends mainly on testosterone (Meisel and Sachs, 1994), whose secretion is suppressed by stress. Thus, it is possible that neuroendocrine impairments caused by stress could affect male sexual behavior directly or indirectly. However, despite the number of reports of stressors influencing the secretion of gonadotropins and gonadal steroids in males, only in a few of them has a correlation between the increase of adrenal corticosteroids and the suppression of testosterone and sexual behavior been established. Sexual behavior in the male may be the most vulnerable aspect of male reproduction, since it is sensitive to even acute stressors. Acute stress by electrical shocks on the skin or tail pinching in rats, facilitates sexual behavior Barfield and Sachs, 1968 and Goldfoot and Baum, 1972, while acute immobilization impairs sexual behavior (Menéndez-Patterson et al., 1978). However, in these studies, a correlation between the effects of stress on sexual behavior and the levels of testosterone and corticosterone was not made. The effects of chronic stress on masculine sexual behavior have been barely studied. We have studied the effects of different stressors, applied both acutely and chronically, on masculine sexual behavior and found that sexual behavior is affected differentially, depending on the characteristics of the stressor used (Retana-Marquez et al., 1996). In Talapoin monkeys, subordinate males (social stress) show neither an increase in aggression or sexual behavior nor in the plasma titers of LH or testosterone (Keverne, 1979). The aim of this study was to evaluate the effects of acute and chronic stress on masculine sexual behavior and whether or not these effects on sexual behavior are accompanied by changes in plasma levels of corticosterone and testosterone. We also analyzed whether testosterone treatment can block the effects of stress on sexual behavior in stressed males.