عنوان انگلیسی
Discourse and attitudes on occupational aspirations and the issue of gender equality: What are the effects of perceived gender asymmetry and prescribed gender role?
دانلود فوری مقاله + سفارش ترجمه 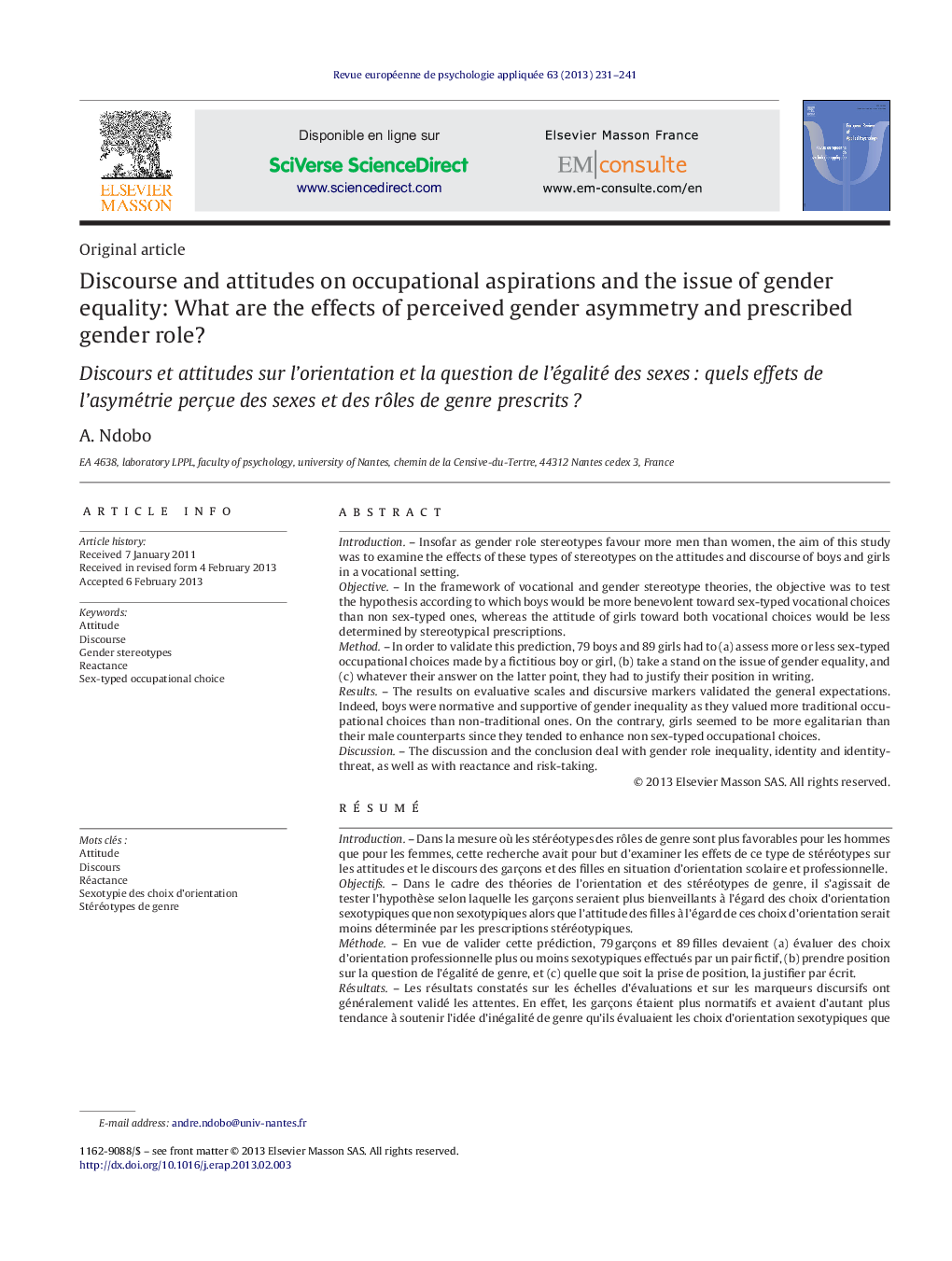 Introduction Insofar as gender role stereotypes favour more men than women, the aim of this study was to examine the effects of these types of stereotypes on the attitudes and discourse of boys and girls in a vocational setting. Objective In the framework of vocational and gender stereotype theories, the objective was to test the hypothesis according to which boys would be more benevolent toward sex-typed vocational choices than non sex-typed ones, whereas the attitude of girls toward both vocational choices would be less determined by stereotypical prescriptions. Method In order to validate this prediction, 79 boys and 89 girls had to (a) assess more or less sex-typed occupational choices made by a fictitious boy or girl, (b) take a stand on the issue of gender equality, and (c) whatever their answer on the latter point, they had to justify their position in writing. Results The results on evaluative scales and discursive markers validated the general expectations. Indeed, boys were normative and supportive of gender inequality as they valued more traditional occupational choices than non-traditional ones. On the contrary, girls seemed to be more egalitarian than their male counterparts since they tended to enhance non sex-typed occupational choices. Discussion The discussion and the conclusion deal with gender role inequality, identity and identity-threat, as well as with reactance and risk-taking.

Career orientation is a decisive step for K-12 students. To help them make their own choices, students can resort to guidance counseling which aims at making academic and professional aspirations come alive (Guichard & Huteau, 2001). Career orientation is also a personal life-project. In building their career project, adolescents are seeking a stable sense of sameness and continuity, characterized by greater delineation of personal values, beliefs, and goals. They want to make their decisions in autonomy and away from their parents (Young et al., 2001 and Young and Valach, 2006). Guidance counseling lies at the core of a very complex process involving various actors who are themselves driven by different motivations. In this process, the expertise of teachers is indeed undeniable but their attitude is not devoid of the influence of their own stereotypical beliefs on gender roles as well as on the family background of the students (Channouf et al., 2005, Mangard and Channouf, 2007 and Mangard and Channouf, 2011). Career orientation and vocational aspirations are also a family project (Turner and Lapan, 2002, Young et al., 2001 and Young and Valach, 2006). Parents contribute to the process in various ways, particularly by influencing children's attitudes and beliefs, by supporting their academic aims and objectives, and by undertaking role-modelling actions (Rainey and Borders, 1997 and Turner et al., 2004). In general, children coming from more privileged families have more educational opportunities, greater access to financial resources when they are needed, more occupational knowledge, and more informal/kinship networks (Schoon, Martin & Ross, 2007). They thus build more varied and more ambitious occupational aspirations (Pearson and Bieschke, 2001, Rebelo Pinto and Soares, 2004, Schoon and Parsons, 2002 and Schoon et al., 2007). Thus, even if we should not neglect the burden of the currently receding labor market and the subsequent changes in careers that precarious situations might entail (Christmas-Best and Schmitt-Rodermund, 2001 and Schoon and Parsons, 2002), it still seems that children who benefit from an androgynous role-oriented mode of socialization are more likely to develop varied professional ambitions going beyond the scope of traditional careers (Pearson & Bieschke, 2001). Third, personal motivation (i.e., self-efficacy, perseverance and self-esteem) (Le Bastard-Landrier, 2005 and Schoon et al., 2007) should also be taken into account. Indeed, career-related choices bear the imprint of personal identity and reveal gender role congruity. One can also add that gender norms or gender schema theories (Bem, 1983) do influence the structuration of one's self-concept and self-schema. Gender norms are asymmetrical and, in the workplace organization, they are rather assertive-oriented.