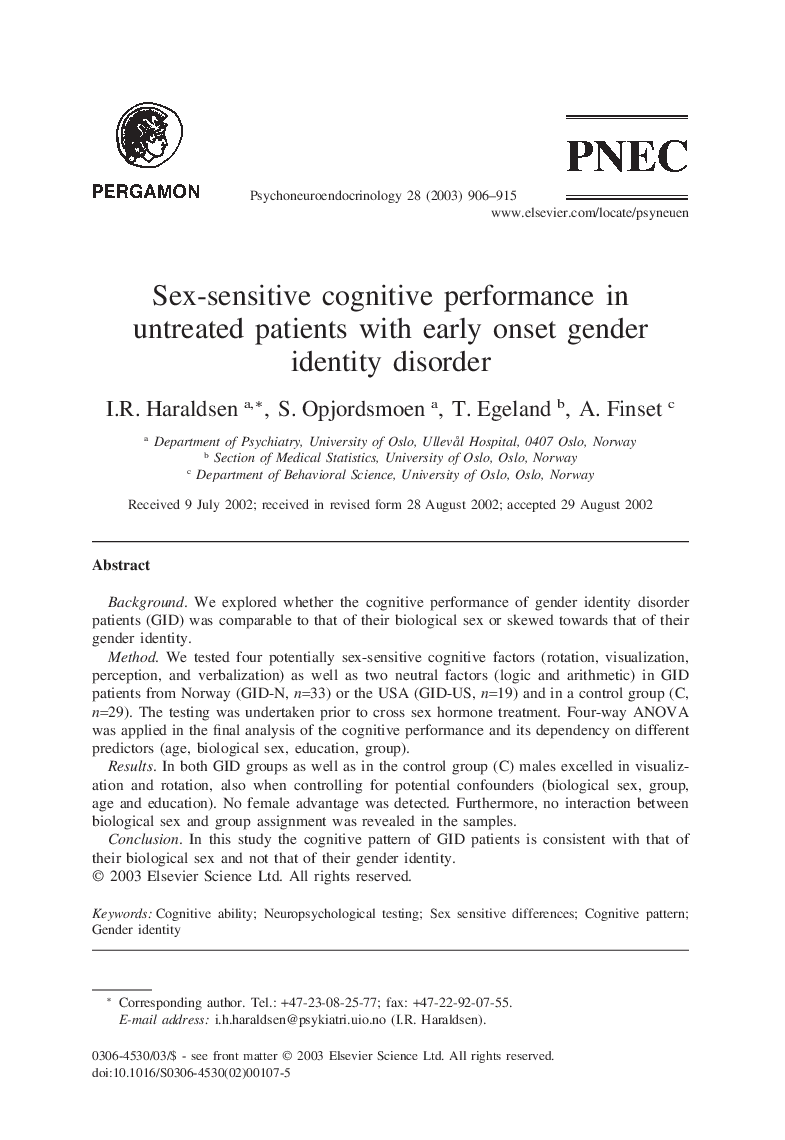 Background. We explored whether the cognitive performance of gender identity disorder patients (GID) was comparable to that of their biological sex or skewed towards that of their gender identity.Method. We tested four potentially sex-sensitive cognitive factors (rotation, visualization, perception, and verbalization) as well as two neutral factors (logic and arithmetic) in GID patients from Norway (GID-N, n=33) or the USA (GID-US, n=19) and in a control group (C, n=29). The testing was undertaken prior to cross sex hormone treatment. Four-way ANOVA was applied in the final analysis of the cognitive performance and its dependency on different predictors (age, biological sex, education, group).Results. In both GID groups as well as in the control group (C) males excelled in visualization and rotation, also when controlling for potential confounders (biological sex, group, age and education). No female advantage was detected. Furthermore, no interaction between biological sex and group assignment was revealed in the samples.Conclusion. In this study the cognitive pattern of GID patients is consistent with that of their biological sex and not that of their gender identity.

Gender identity disorder of adults (GID, DSM IV 302.85) (APA, 1994) is characterized by a discrepancy between biological sex and gender identification, expressed as a feeling of being born with the wrong sex. Recognized since antiquity (Foucault, 1976), the etiology of GID remains unknown. Theories range from psychodynamic conflicts and defects of psychosexual development to biologically oriented hypotheses (Lothstein, 1982, LeVay and Hamer, 1994, Zhou et al., 1995 and Kruijver et al., 2000). Regardless of etiological controversy, evidence has been presented that the sex-sensitive cognitive performance of GID patients is skewed away from that of their biological sex towards that of their perceived gender. However, only one study has investigated untreated early onset patients (Cohen-Kettenis et al., 1998). The authors observed less pronounced sex differences in GID patients compared to normal controls and argued that less functional brain lateralization in male GID patients compared to control males might reflect a more feminized brain structure. Instead, most studies of cognitive function in GID patients have been limited to examination during cross-sex hormone therapy, and the results suggest that cross-sex hormone treatment might cause cognitive changes in GID patients (van Goozen et al., 1994, Miles et al., 1998 and Slabbekoorn et al., 1999). In healthy men and women sex-sensitive patterns of cognitive performance have been thoroughly described (Linn and Petersen, 1985, Silverman and Phillips, 1993, McKeever, 1995, Voyer et al., 1995, James and Kimura, 1997, Janowsky et al., 1998 and Halpern, 2000), although the replication of neuropsychological testing appears to have provoked strong methodological discussions (McKeever, 1995). Furthermore, a unifying causal hypothesis has not been presented. It has been proposed that sex hormones influence embryonic brain development (Dohler et al., 1984, Geschwind and Galaburda, 1985, Williams and Meck, 1990, Swaab et al., 1995 and McEwen, 1997) or modulate cognitive performance in adult life (Christiansen and Knussmann, 1987, Hampson and Kimura, 1988, Gouchie and Kimura, 1990 and Sherwin, 1994). On the other hand, neuropsychological sex-differences may be influenced not only by a certain cognitive ability, but also by an interplay with complex psychosocial factors (Breedlove, 1997). The strongest evidence for prenatally influenced cognitive function is observed in endocrine disorders such as congenital andrenal hyperplasia (CAH) in which adolescent females display a cognitive performance skewed towards that of healthy males despite postnatal female hormone treatment (Resnick et al., 1986, Hampson et al., 1998 and Kelso et al., 1999). On the other hand, GID patients show endocrinological parameters comparable to their biological sex and until now, no known genetic defect has been found. The aim of the present study was to evaluate the cognitive function of young, somatically healthy early onset GID patients before hormone treatment, testing whether they showed a pattern comparable to their same sex control group or not, while controlling for potential confounders.