عنوان انگلیسی
Know yourself and you shall know the other… to a certain extent: Multiple paths of influence of self-reflection on mindreading
دانلود فوری مقاله + سفارش ترجمه 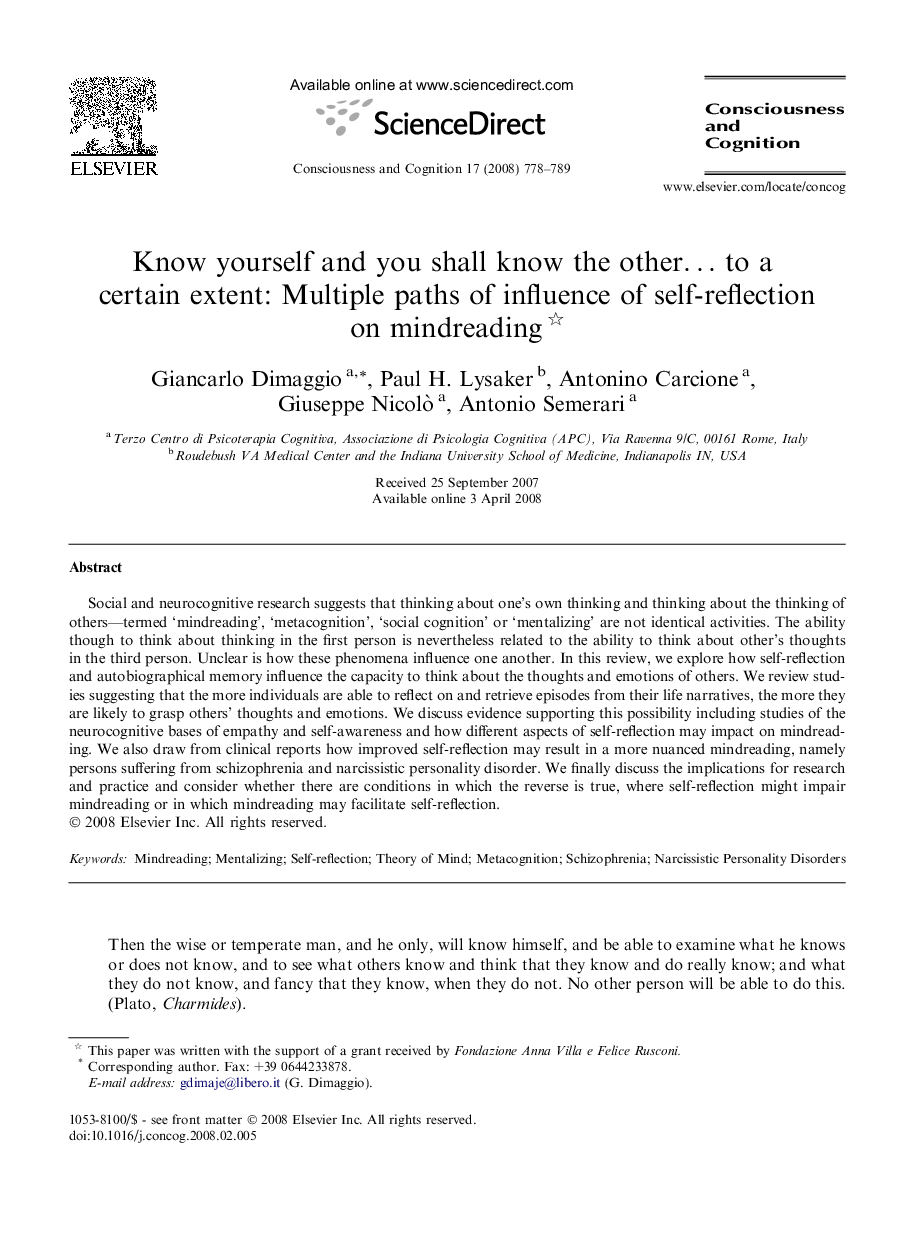 Social and neurocognitive research suggests that thinking about one’s own thinking and thinking about the thinking of others—termed ‘mindreading’, ‘metacognition’, ‘social cognition’ or ‘mentalizing’ are not identical activities. The ability though to think about thinking in the first person is nevertheless related to the ability to think about other’s thoughts in the third person. Unclear is how these phenomena influence one another. In this review, we explore how self-reflection and autobiographical memory influence the capacity to think about the thoughts and emotions of others. We review studies suggesting that the more individuals are able to reflect on and retrieve episodes from their life narratives, the more they are likely to grasp others’ thoughts and emotions. We discuss evidence supporting this possibility including studies of the neurocognitive bases of empathy and self-awareness and how different aspects of self-reflection may impact on mindreading. We also draw from clinical reports how improved self-reflection may result in a more nuanced mindreading, namely persons suffering from schizophrenia and narcissistic personality disorder. We finally discuss the implications for research and practice and consider whether there are conditions in which the reverse is true, where self-reflection might impair mindreading or in which mindreading may facilitate self-reflection.

Understanding what we ourselves and others think involves complex operations. These operations require us to comprehend internal signals telling us whether we are tired, tense or energetic, infer the motivations driving others’ actions and effectively pursue profitable goals on the basis of this information. We have to decode facial expressions and consider background information to understand whether others are sincere or lying, what has motivated them to behave in the way they have and so on. We also need to distinguish our perspective from other’s and the more we are able to do this, the more we are likely to successfully find ways to meet our needs and manage our emotions (Lane & Schwartz, 1987). Broadly defined these abilities have been grouped together under the labels such as “mentalizing”, “theory of mind” or “metacognition,” both of which imply activities involving thinking about thinking or the formation of cognitions about cognition and affects (Fonagy, 1991 and Semerari et al., 2003). While grouping these phenomenon together simplifies our ability to discuss them as a class of human abilities, data have increasingly suggested that what we call metacognition or mentalizing may involve a number of related but distinct capacities, ones that can operate or be impaired independently of one another and ones that may require a number of distinct cognitive processes (Harrington et al., 2005 and Saxe, 2005). Evidence from studies employing a wide range of methodologies have suggested in particular that in both clinical and community samples the capacity for thinking about one’s own thoughts—self-reflection—and ability to think about or make inferences about the thoughts and feelings of another, sometimes called theory of mind or mindreading, are not reducible to one another. People may have more difficulties, for instance, with one as opposed to the other ability, and the brain regions activated by one task do not completely overlap with those activated by the other (Mitchell, Macrae, & Banaji, 2006). These findings raise a number of questions pertaining to the relationship of being aware of one’s own thoughts and feelings and being aware of the other’s thoughts and feelings. It is clear that the two are related (Saxe, Moran, Scholz, & Gabrieli, 2006). No claim could be made that someone could know their own mind and be without some awareness of the other, or vice versa. But how do they influence one another? Answers to this question may have important implications for understanding psychiatric conditions characterized by poor metacognition and understanding the links in general between metacognition and function in daily life. In particular it is important to formulate ideas regarding how and when awareness of the self and awareness of the other are related. Moreover literature, in particular from the cognitive science, social psychology and neuroimaging fields has until now concentrated mostly on implicit or quasi-automatic attributional processes humans activate to understand the mental state of the others using their own self. We propose that research could next concentrate on how conscious access to own’s mental states and the breadth and width of self-knowledge might effect various forms of mindreading. In response to these questions and in an attempt to formulate new hypotheses about specific links between the two processes, this paper will explore one leg of the possible connection, the effects of understanding one’s own mind on knowing the mind of the other in adults. Therefore, we will explore the possibility that self-reflection effects mindreading in the third person, and that enhanced self-reflection promotes more sensitive judgments about the mind of the other. We will discuss: (a) research on the relative independence of self-reflection and mind reading capacities; (b) the possibility that in certain instances increases in conscious aspects of self-reflectivity (e.g. recognizing that one is holding onto an idea which could thought of differently, or understanding that one’s own affect is determined by causes rooted in one’s own schematic construction of the relational world as opposed to a specific situation) are linked to better mindreading; (c) cases in which an increase in self-reflectivity over time precedes an improvement in mindreading; (d) cases in which using autobiographical memory makes it easier to reflect on others’ minds, (e) hypotheses about how different aspects of self-reflection may impact on mindreading, and how these different aspects can interact together fostering or preventing a sensitive understanding of the other’s mind.