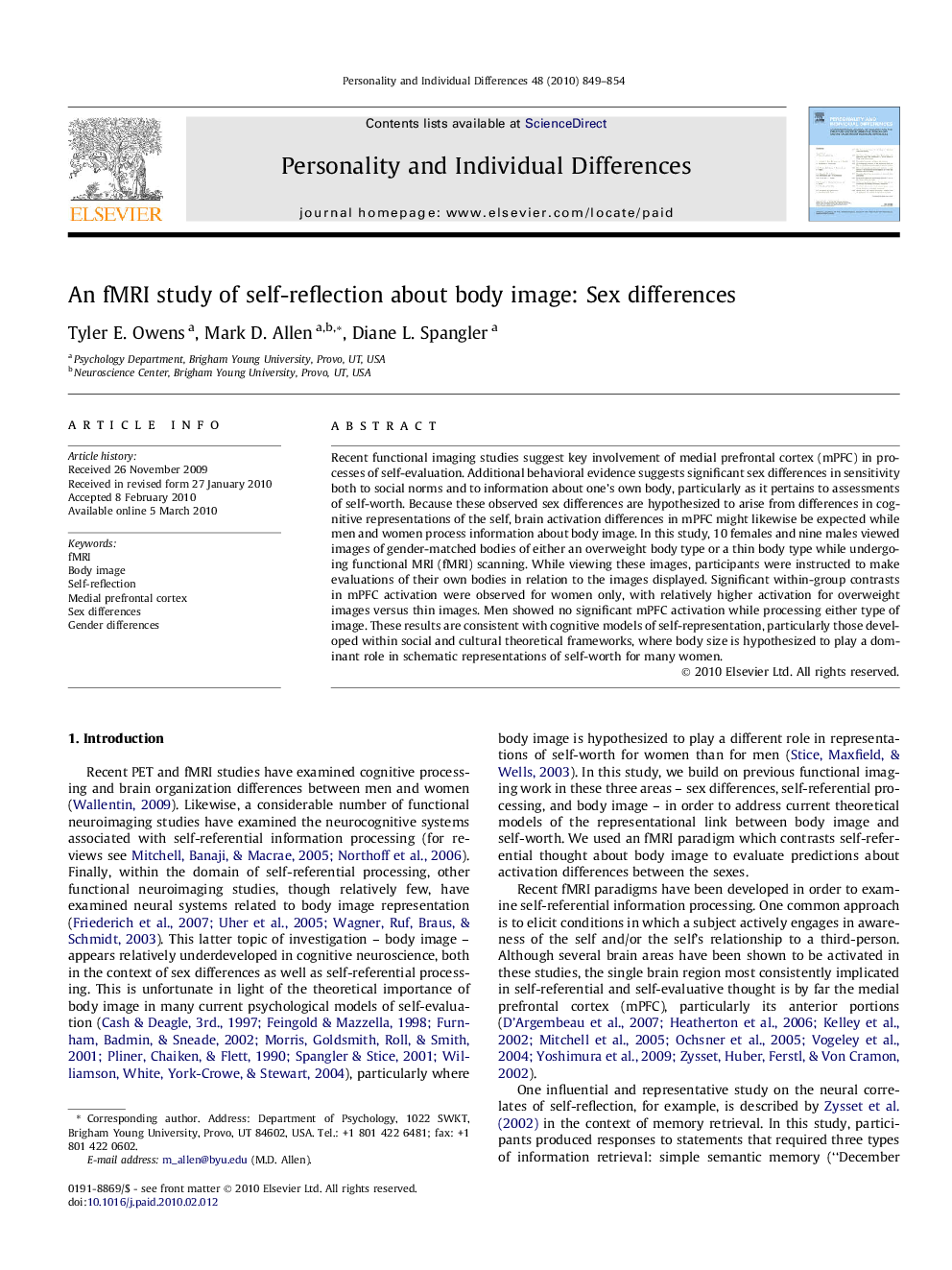 Recent functional imaging studies suggest key involvement of medial prefrontal cortex (mPFC) in processes of self-evaluation. Additional behavioral evidence suggests significant sex differences in sensitivity both to social norms and to information about one’s own body, particularly as it pertains to assessments of self-worth. Because these observed sex differences are hypothesized to arise from differences in cognitive representations of the self, brain activation differences in mPFC might likewise be expected while men and women process information about body image. In this study, 10 females and nine males viewed images of gender-matched bodies of either an overweight body type or a thin body type while undergoing functional MRI (fMRI) scanning. While viewing these images, participants were instructed to make evaluations of their own bodies in relation to the images displayed. Significant within-group contrasts in mPFC activation were observed for women only, with relatively higher activation for overweight images versus thin images. Men showed no significant mPFC activation while processing either type of image. These results are consistent with cognitive models of self-representation, particularly those developed within social and cultural theoretical frameworks, where body size is hypothesized to play a dominant role in schematic representations of self-worth for many women.

Recent PET and fMRI studies have examined cognitive processing and brain organization differences between men and women (Wallentin, 2009). Likewise, a considerable number of functional neuroimaging studies have examined the neurocognitive systems associated with self-referential information processing (for reviews see Mitchell et al., 2005 and Northoff et al., 2006). Finally, within the domain of self-referential processing, other functional neuroimaging studies, though relatively few, have examined neural systems related to body image representation (Friederich et al., 2007, Uher et al., 2005 and Wagner et al., 2003). This latter topic of investigation – body image – appears relatively underdeveloped in cognitive neuroscience, both in the context of sex differences as well as self-referential processing. This is unfortunate in light of the theoretical importance of body image in many current psychological models of self-evaluation (Cash and Deagle, 1997, Feingold and Mazzella, 1998, Furnham et al., 2002, Morris et al., 2001, Pliner et al., 1990, Spangler and Stice, 2001 and Williamson et al., 2004), particularly where body image is hypothesized to play a different role in representations of self-worth for women than for men (Stice, Maxfield, & Wells, 2003). In this study, we build on previous functional imaging work in these three areas – sex differences, self-referential processing, and body image – in order to address current theoretical models of the representational link between body image and self-worth. We used an fMRI paradigm which contrasts self-referential thought about body image to evaluate predictions about activation differences between the sexes. Recent fMRI paradigms have been developed in order to examine self-referential information processing. One common approach is to elicit conditions in which a subject actively engages in awareness of the self and/or the self’s relationship to a third-person. Although several brain areas have been shown to be activated in these studies, the single brain region most consistently implicated in self-referential and self-evaluative thought is by far the medial prefrontal cortex (mPFC), particularly its anterior portions (D’Argembeau et al., 2007, Heatherton et al., 2006, Kelley et al., 2002, Mitchell et al., 2005, Ochsner et al., 2005, Vogeley et al., 2004, Yoshimura et al., 2009 and Zysset et al., 2002). One influential and representative study on the neural correlates of self-reflection, for example, is described by Zysset et al. (2002) in the context of memory retrieval. In this study, participants produced responses to statements that required three types of information retrieval: simple semantic memory (“December 31st is New Year’s Eve”), episodic memory (“I spent New Year’s 2000 at home”), or evaluative statements (“I enjoy going to New Year’s parties”). Compared to a baseline task, the episodic and evaluative tasks, but not the semantic task, both showed significant mPFC activation, with a greater anterior extent of activation for the evaluative task. Additionally, significant activation was found bilaterally in the precuneus, an area with strong direct corticocortical ties to the mPFC. As stated above, within the domain of self-referential cognition, relatively few fMRI studies have investigated brain activity associated with cognitive representations of body image, and no self-referential studies have systematically examined differences between the sexes. The possibility that sex differences might exist in self-referential processing is suggested by evidence that males and females differ substantively in at least some cognitive social processing domains where self-representation plays a strong role. For example, females, particularly younger females, show more public self-consciousness than males (Gould, 1987). As for body image, particularly body size and fat composition, differences between the sexes in self-representation appear to be especially pronounced. For example, females have been shown to be more concerned than males with physical attractiveness, over-eating, body weight, and body image, where satisfaction with one’s body has a significantly higher correlation with self-esteem for females than it does for males (Feingold and Mazzella, 1998, Furnham et al., 2002 and Pliner et al., 1990). Given previous findings that females generally appear more invested in body image than males, particularly with respect to weight, and that body size appears to play a more dominant role in cognitive representations of self image and self-worth, it is possible that females might show stronger activation in mPFC when engaged in self-reflection about their bodies, particularly when the content of self-reflection concerns the prospect of being overweight, in comparison to socially desirable norms for thinness (Bessenoff and Snow, 2006 and Harrison, 2003). Moreover, given evidence that females also tend to show more sensitivity to social judgment than males (Davison & McCabe, 2006), this strength of self-reflective activity about body size might be further increased when it is elicited by self-reflexive thought – that is – in the context of a third-person opinion, where both self-reflective and self-reflexive processes appear to elicit activation within similar regions of the mPFC ( D’Argembeau et al., 2007 and Ochsner et al., 2005). The following experiment was designed to address this hypothesis, employing a paradigm with some similarities to that of Uher et al. (2005). In this experiment, men and women viewed virtual model images of thin individuals (close to the social ideal) versus overweight individuals (far from the social ideal) while undergoing fMRI scanning. In addition, subjects were instructed to consider a third-person opinion, in which the subjects’ own body shape is alleged to resemble those in the images.