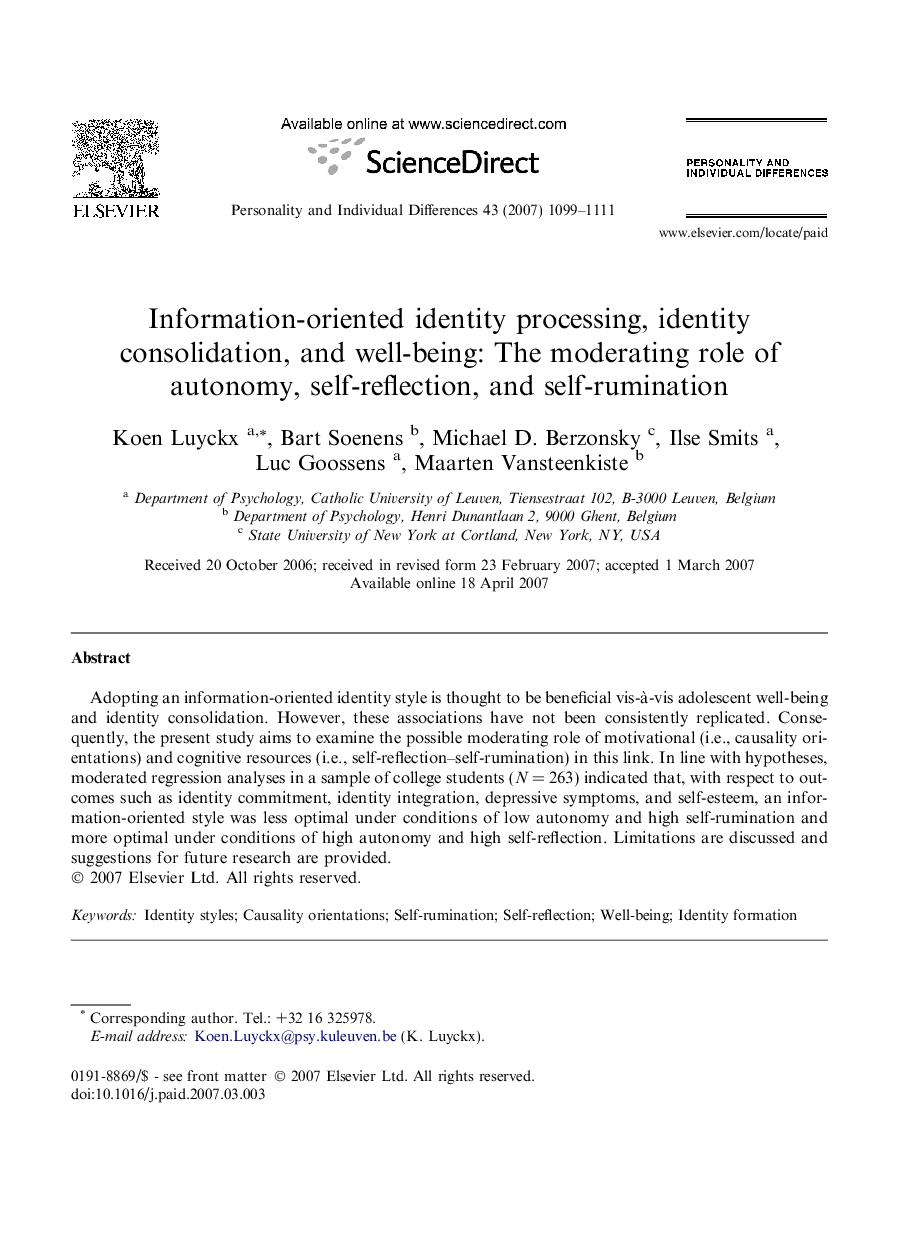 Adopting an information-oriented identity style is thought to be beneficial vis-à-vis adolescent well-being and identity consolidation. However, these associations have not been consistently replicated. Consequently, the present study aims to examine the possible moderating role of motivational (i.e., causality orientations) and cognitive resources (i.e., self-reflection–self-rumination) in this link. In line with hypotheses, moderated regression analyses in a sample of college students (N = 263) indicated that, with respect to outcomes such as identity commitment, identity integration, depressive symptoms, and self-esteem, an information-oriented style was less optimal under conditions of low autonomy and high self-rumination and more optimal under conditions of high autonomy and high self-reflection. Limitations are discussed and suggestions for future research are provided.

Over the years, the process of identity exploration has been viewed as a crucial component of identity formation (Grotevant, 1987). Marcia (1966) conceptualized exploration as one of the two basic dimensions of identity formation, the other one being identity commitment. He defined exploration as the degree to which individuals engage in a personal search for different values, beliefs, and goals; commitment was defined as the adherence to a set of convictions, goals, and beliefs. In an attempt to capture the social-cognitive processes underlying identity exploration, Berzonsky (1990) proposed three identity processing styles. He conceptualized the information-oriented identity style as the social-cognitive style underlying a pro-active, thorough, and broad-based identity exploration (Soenens, Duriez, & Goossens, 2005b). Individuals scoring high on the information-oriented style actively construct an identity by engaging in a process of exploration through seeking out and evaluating self-relevant information. They are self-critical, open to new information, and willing to revise aspects of their identity (Berzonsky, 1990 and Berzonsky, 1992a). They display high levels of identity commitment, cognitive complexity, and self-reflection (Berzonsky & Ferrari, 1996). This style has to be contrasted to a normative style characterized by closure and a tendency to rely on social norms and expectations when facing identity-related decisions, and a diffuse-avoidant style characterized by a tendency to procrastinate and to avoid exploring identity-related issues in a systematic manner. Berzonsky’s (1990) theory generally assumes that being information-oriented is beneficial for one’s identity formation and for one’s psychosocial functioning in general. In line with this idea, the use of an information-oriented style was found to relate to identity consolidation (Berman, Schwartz, Kurtines, & Berman, 2001), agency (Berzonsky & Kuk, 2000), adaptive coping (Berzonsky, 1992a), and self-esteem (Nurmi, Berzonsky, Tammi, & Kinney, 1997). As such, the use of an information-oriented style can indeed be seen as a preferable course for identity consolidation and well-being (Schwartz, Mullis, Waterman, & Dunham, 2000). It should be noted, however, that the size of these association is typically modest. Moreover, some studies have failed to replicate some of these associations and evidenced non-significant relationships between an information-oriented style and indices of well-being, such as depressive symptoms and self-esteem (e.g., Nurmi et al., 1997 and Passmore et al., 2005). On the basis of this pattern of findings, we examined the possibility that the use of an information-oriented style may be optimal for identity consolidation and well-being under certain conditions but may be less optimal under other conditions. Specifically, we examined the moderating role of late adolescents’ motivational orientations (i.e., their causality orientations) and cognitive orientations (i.e., self-reflection vs. self-rumination). 1.1. The moderating role of causality orientations Causality orientations capture individuals’ general motivational styles of regulating their behavior. Specifically, Self-Determination Theory (SDT; Ryan & Deci, 2000) distinguishes between three such orientations. The autonomous orientation is characteristic of individuals whose actions are based on a sense of volition. These individuals actively seek out opportunities that correspond to their personal values and interests. This orientation is related to high levels of well-being, ego-development, personality integration, and goal attainment (Deci and Ryan, 1985 and Sheldon and Kasser, 1995). The controlled orientation is characteristic of individuals who perceive their behavior as being initiated by external demands or by partially internalized imperatives. This orientation has been associated with concern about external agents of control, negative affect, and public self-consciousness (Deci & Ryan, 1985). Finally, the impersonal orientation is characteristic of individuals who believe that they lack the resources to personally regulate their actions to obtain desired outcomes. These individuals develop a sense of incompetence that makes them vulnerable to failure experiences, depressive symptoms, and social anxiety (Deci & Ryan, 1985). Within SDT, an autonomous orientation is considered a more adaptive way of regulating one’s behaviors compared to both a controlled and an impersonal regulation (Deci & Ryan, 1985). Although it has been found that an autonomous orientation is positively correlated with an information-oriented identity style, the size of this correlation was relatively modest, indicating that an information-oriented style may go hand in hand with either high or low levels of autonomy (Soenens, Berzonsky, Vansteenkiste, Beyers, & Goossens, 2005a). On the basis of SDT, one may expect that the degree to which adolescents regulate their behaviors in an autonomous manner moderates the association between an information-oriented style and adolescent psychosocial outcomes. Specifically, adolescents who actively explore identity-relevant options under conditions of high autonomy would experience their search for a personal identity as self-endorsed and vitalizing. Conversely, an exploring identity alternatives under conditions of controlled or impersonal regulation is more likely to be experienced as stressful, mentally draining, bothersome, or even useless (Deci & Ryan, 1985). Moreover, information-oriented adolescents with an autonomous orientation may be more aware of their personal preferences so that they ultimately choose those options that truly reflect their own preferences (Brown & Ryan, 2003). The resulting sense of personality congruence may ultimately also contribute to well-being and identity consolidation (Sheldon & Kasser, 1995). In sum, it was hypothesized that an information-oriented style would be related to more adaptive outcomes when coupled with high levels of autonomy and low levels of controlled and impersonal regulation.