عنوان انگلیسی
Impaired self-reflection in psychiatric disorders among adults: A proposal for the existence of a network of semi independent functions
دانلود فوری مقاله + سفارش ترجمه 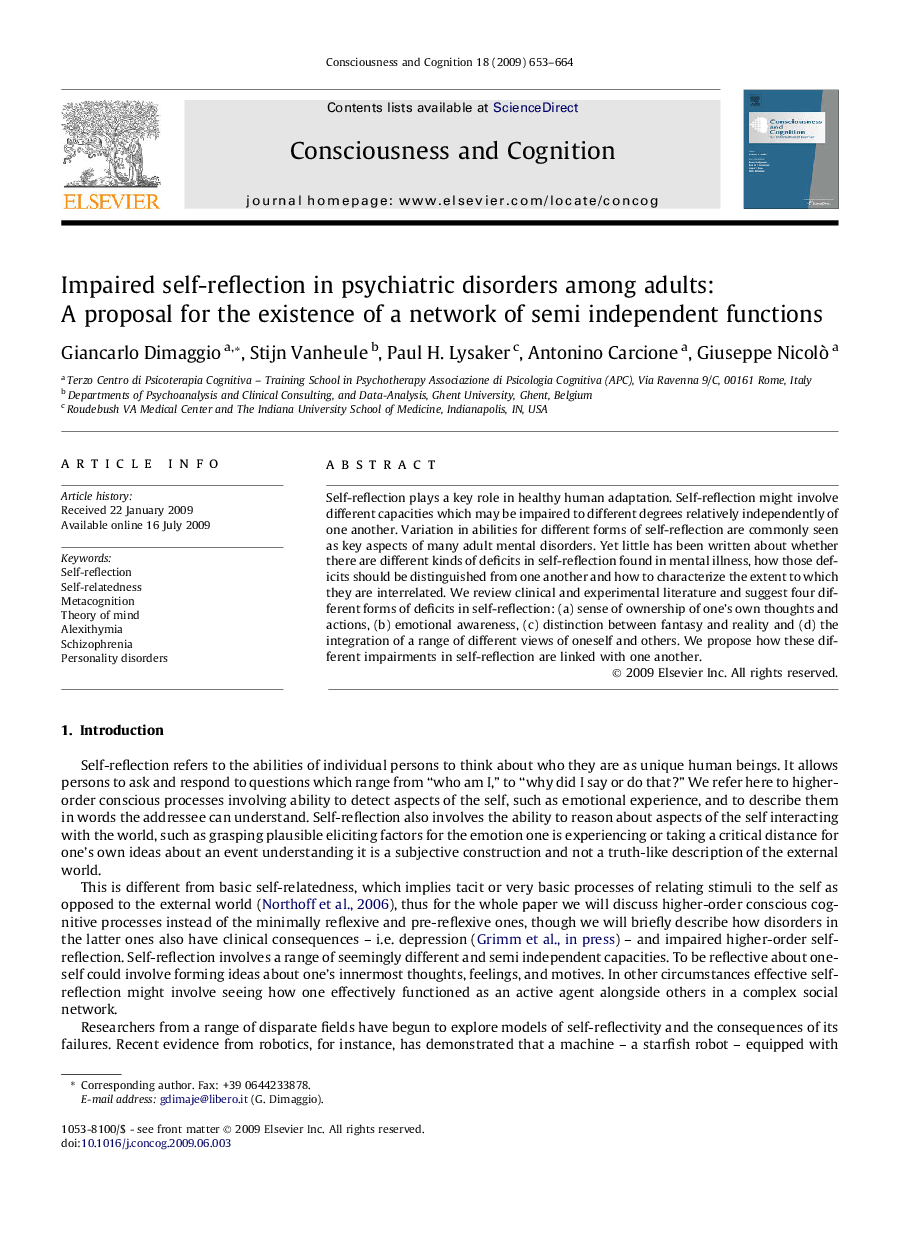 Self-reflection refers to the abilities of individual persons to think about who they are as unique human beings. It allows persons to ask and respond to questions which range from “who am I,” to “why did I say or do that?” We refer here to higher-order conscious processes involving ability to detect aspects of the self, such as emotional experience, and to describe them in words the addressee can understand. Self-reflection also involves the ability to reason about aspects of the self interacting with the world, such as grasping plausible eliciting factors for the emotion one is experiencing or taking a critical distance for one’s own ideas about an event understanding it is a subjective construction and not a truth-like description of the external world. This is different from basic self-relatedness, which implies tacit or very basic processes of relating stimuli to the self as opposed to the external world (Northoff et al., 2006), thus for the whole paper we will discuss higher-order conscious cognitive processes instead of the minimally reflexive and pre-reflexive ones, though we will briefly describe how disorders in the latter ones also have clinical consequences – i.e. depression (Grimm et al., in press) – and impaired higher-order self-reflection. Self-reflection involves a range of seemingly different and semi independent capacities. To be reflective about oneself could involve forming ideas about one’s innermost thoughts, feelings, and motives. In other circumstances effective self-reflection might involve seeing how one effectively functioned as an active agent alongside others in a complex social network. Researchers from a range of disparate fields have begun to explore models of self-reflectivity and the consequences of its failures. Recent evidence from robotics, for instance, has demonstrated that a machine – a starfish robot – equipped with something that might roughly approximate unconscious self-representations, that is actuation–sensation relationships which can be used by the starfish to infer its own structure, can more effectively generate locomotion and adapt to losses of its limbs (Bongard, Zykov, & Lipson, 2006). Metzinger (2008) has noted that the finding that a robot with some kind of approximate self-representation works better than one without an approximate self-representation, might offer some clues about people whose complex and conscious levels of self-reflection are impaired. Clearly, deficits in self-reflectivity should prevent persons from correcting imprecise causal attributions, ineffective action plans and faulty coping strategies leading to gross psychological distress and social impairment. If I could not reflectively integrate disparate personal experiences across a series of days, how could I maintain an integral sense of identity or respond to complex social challenges? If I cannot effectively reflect on internal experience, how could I modify specific beliefs and larger strategies for dealing with threats to health and well being? These forms of dysfunction might place persons in some sense in a position similar to the starfish robot, one without a self-map, incapable of relearning to walk when its internal structure is damaged. Behaviors which proceed from dysfunctions in self-awareness could not only mirror that of the virtual starfish but also what we see in some forms of mental illness (Dimaggio et al., 2007, Lane, 2008, Taylor et al., 1997 and Vanheule et al., 2007). Secondly, it seems natural to ask whether forms of dysfunctional self-reflectivity play a central role in mental illness. A key feature, for instance, of a range of disorders involves lack of awareness of one’s own deficits and impact on the lives of others (Lysaker & Buck, 2008). The capacity for self-reflection in general has moreover been prospectively linked to resilience and the development of personal agency in the face of mental illness (Hauser & Allen, 2006) and to better therapeutic outcomes (Grabe et al., 2008 and Taylor et al., 1997). Poor emotional regulation might arise from disturbed self-reflection (Ochsner & Gross, 2008). Patients, for example with schizophrenia, who lack the cognitive resources to reappraise the meaning of stimuli, may be unable to recognize that a seemingly hostile statement is not a sign of aggression because it uttered by someone with a cheerful expression on their face. They may also struggle to balance the short and long-term pros