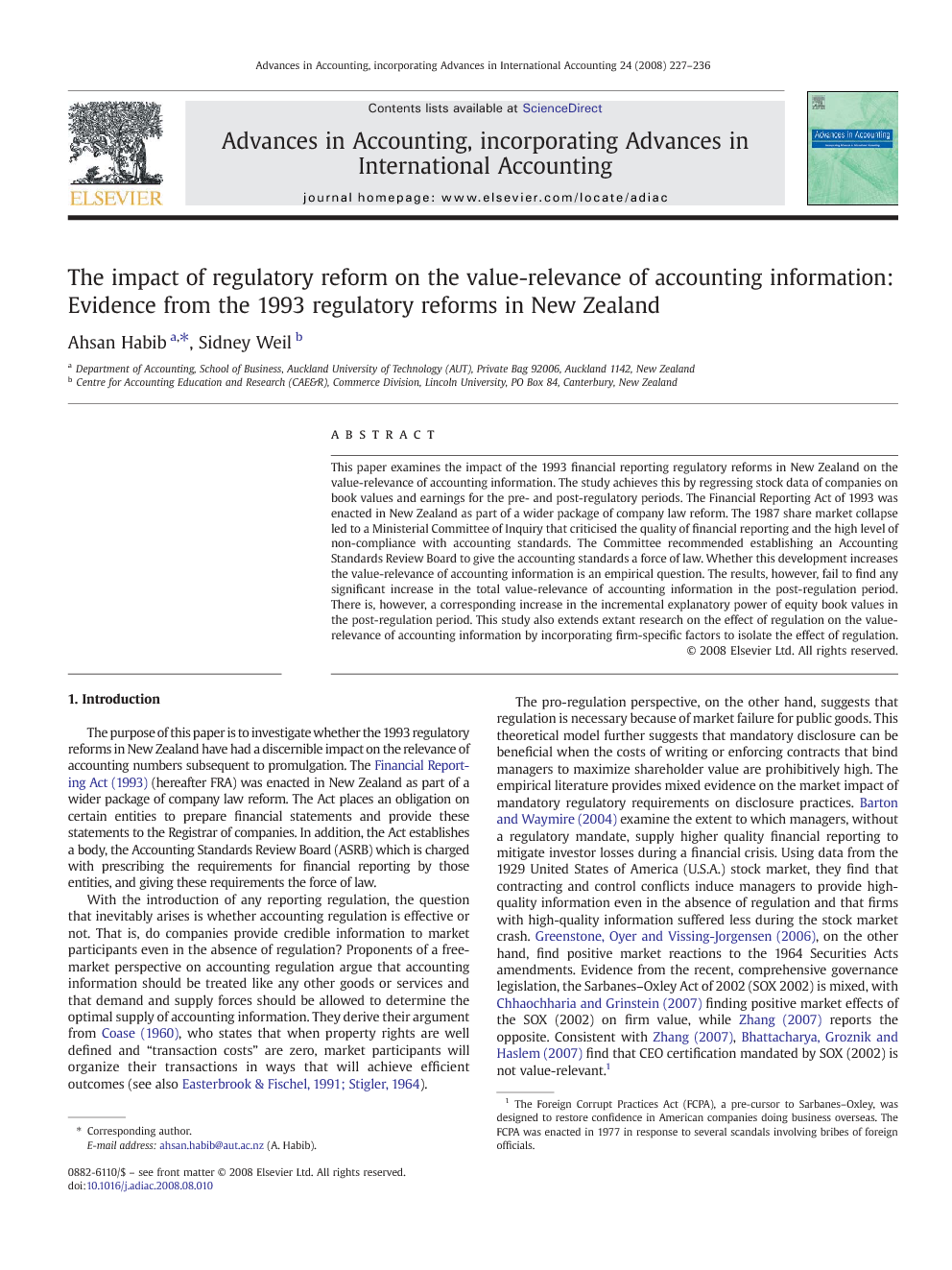 This paper examines the impact of the 1993 financial reporting regulatory reforms in New Zealand on the value-relevance of accounting information. The study does not find evidence that the 1993 regulatory reform in New Zealand had a discernible impact on the value-relevance of accounting information. Firm-specific economic factors, on the other hand, do explain a significant fraction of the relevance of accounting information for stock prices. When firms report losses, investors consider earnings to be less relevant for equity valuation purposes. For larger firms, however, earnings are value-relevant, probably because larger firms are more likely to be profitable and earnings of such firms are more persistent compared to their small firm counterparts. Furthermore, earnings of high growth firms are valued positively in the market, which is consistent with the argument that high growth firms are likely to have experienced positive abnormal earnings in recent periods, which are expected to persist into the future. Failure to find any significant effect of regulatory reform does not automatically imply that the regulation is ineffective or unnecessary. As noted by Ely and Waymire (1999), the relevance of accounting data may be influenced by changes in the economic environment which standard setters can hardly influence and, “Hence they may play a continual game of “catch-up” where new standards are required merely to keep pace with changing external circumstances” (p. 295). Several limitations of the study should be noted. Firstly, although the study controls for the effects of firm-specific economic factors on the value-relevance of accounting information, does not examine the effects of particular accounting standards promulgated during the sample period. However, the fact that firm-specific variables interacted with accounting earnings and equity book values explain about 84% of the variation in stock prices reduces the concern to some extent. However, the result should be interpreted in light of the concern raised above. Secondly, the study has assumed that the post-regulatory period starts after the ASRB comes into force, namely, August 1994. In the tests conducted, nine 1994 observations have their fiscal years ending between August and December 1994. Strictly speaking, these observations should be considered as part of the post-regulatory period, but to be consistent with the fact that these observations pertain to 1994 and hence should not be merged with 1995 in calculating annual R2, the nine observations have been included with the 1994 data. This may have had an impact on the results. Secondly, the pre-regulation period covered by the study started only in January 1990, as this is the date from which DATASTREAM started to provide adjusted stock price data for a significant number of companies. This limited pre-regulation period may have had an impact on the analyses, due to its duration being shorter than the post-regulation period.