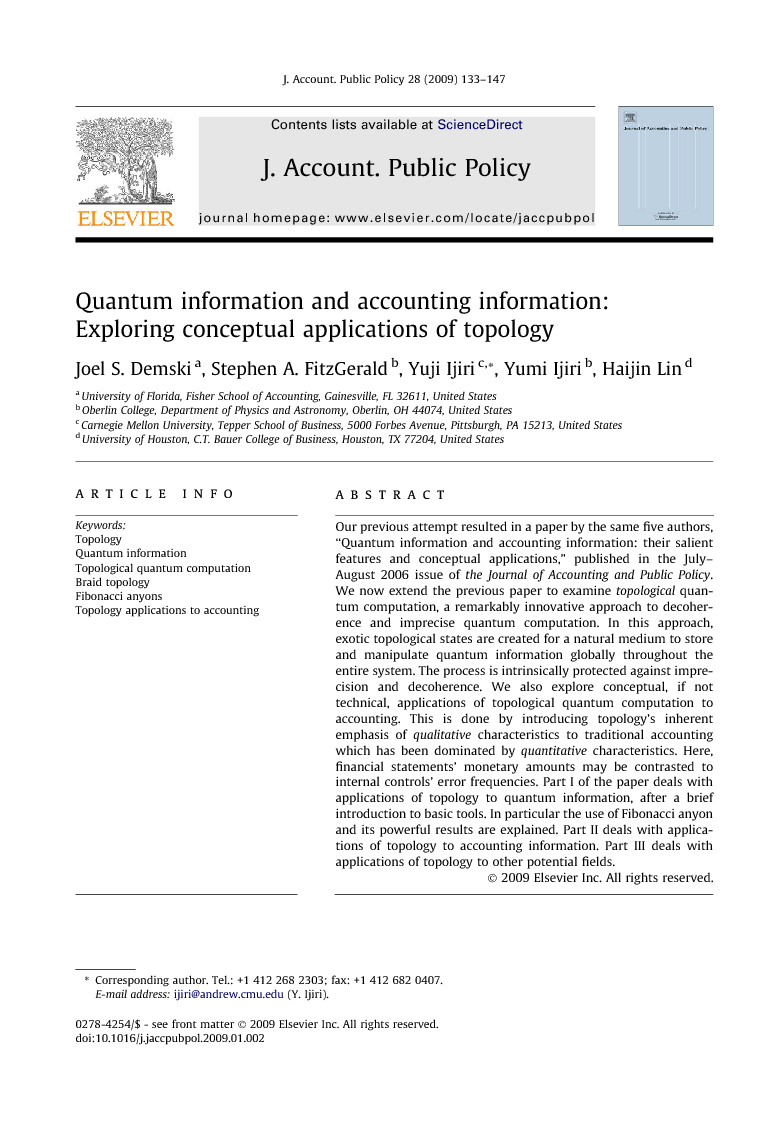 Our previous attempt resulted in a paper by the same five authors, “Quantum information and accounting information: their salient features and conceptual applications,” published in the July–August 2006 issue of the Journal of Accounting and Public Policy. We now extend the previous paper to examine topological quantum computation, a remarkably innovative approach to decoherence and imprecise quantum computation. In this approach, exotic topological states are created for a natural medium to store and manipulate quantum information globally throughout the entire system. The process is intrinsically protected against imprecision and decoherence. We also explore conceptual, if not technical, applications of topological quantum computation to accounting. This is done by introducing topology’s inherent emphasis of qualitative characteristics to traditional accounting which has been dominated by quantitative characteristics. Here, financial statements’ monetary amounts may be contrasted to internal controls’ error frequencies. Part I of the paper deals with applications of topology to quantum information, after a brief introduction to basic tools. In particular the use of Fibonacci anyon and its powerful results are explained. Part II deals with applications of topology to accounting information. Part III deals with applications of topology to other potential fields.

Henri Poincaré (1854–1912) is often cited as the father of topology, as he has contributed much to the development of topology which he named “Analysis situs.” An easy way of illustrating topology might be the following. Suppose we take a tennis ball and throw it upwards, and trace its trajectory. This can be recorded most accurately under Newtonian mechanics. However, suppose the number of balls increases from 1 to 10, to 100, and more with all the balls thrown up simultaneously. Because these balls interact with each other, the task of tracking each of them was made almost impossible. When the ball is thrown up, our attention naturally goes to the ball itself which is in the “foreground,” but in topology the focus is also on the “background” or circumstances surrounding the event.36 We treat a collection of balls going up and coming down as a cloud of balls, focusing on the cloud, not the individual balls. Then we try to find patterns that the cloud of balls created. We realize that the background may show more intriguing patterns than the one in the foreground because of the difference between the two perspectives. Of course, the pattern recognition cannot be perfectly accurate when we are dealing with thousands of balls. Here, topology allows us to make approximations. Also this is where the topology is focused on qualitative characteristics. But topology is still a branch of mathematics and its rigor is not compromised. Topology used to be viewed as mathematics for mathematicians. Near the turn of this millennium, applications of topology started showing up in many fields including economics. This surge of applications is triggered by many breakthroughs in biology, medicine, nanotechnology, etc. and many of them need to be categorized and prototyped systematically. Topology’s fundamental strength in categorizing and prototyping are now recognized and utilized broadly.37 Ueno et al. (2003, p. 4) state: “From the standpoint of the twentieth century mathematics, geometry can be roughly divided into two parts; (differential) geometry – where lengths and angles are considered important, and topology – where slight differences in lengths and angles are considered insignificant. However, these two fields of modern mathematics are not independent of one another. Rather, they represent two different ways of looking at figures. When our readers study a figure, the use of both methods allows them to see the properties of the figure more clearly. These two points of view enhance each other and often bring out hidden properties of figures that might not be visible when using one of these mathematical methods alone.” These dualities appear frequently in topology. In our world of accounting, a more ambitious engagement of a dual perspective seems promising. Fortunately, we have, a head start in these matters, provided by Butterworth’s (1972) emphasis on the accounting network and Arya et al.’s (2000) emphasis on exploiting that network to infer transactions and, subsequently, to compensate for possible errors in the underlying recording. Considering topology’s ability to deal with higher dimensions, this might give us new perspectives on the double-entry network. We also wonder whether the same kind of dual perspective might be generated between conventional accounting and topological perspectives. At least comparisons of the two might expand the perspectives in accounting to focus not only on individual data (microscopic perspectives) but also focus on a group of data (macroscopic perspectives). The same relationship should hold between “conventional accounting” and “topological accounting.” Furthermore, the search for complementarity need not stop here. Deeper still is the “cut” between the endogenous and the exogenous. It seems clear we must treat the firm’s underlying transactions as endogenous, just as we must treat the auditor’s behavior as endogenous. And it is this imbedding in a presumably goal seeking social network, replete with human foibles, that distinguishes accounting from quantum information. Basener began his book with the question, why study topology? His response is “topology is both highly beautiful and highly useful. Its beauty comes from both its wondrous geometric constructions and its logical rigor. Its utility comes from the fundamental importance of continuous functions and geometric objects in mathematics and science. Topology gives insight into practically all other branches of mathematics…(Basener, 2006, p. xxix)” We feel the benefits of topology extend well beyond mathematics and physical science and see here its possible connections to the accounting realm.