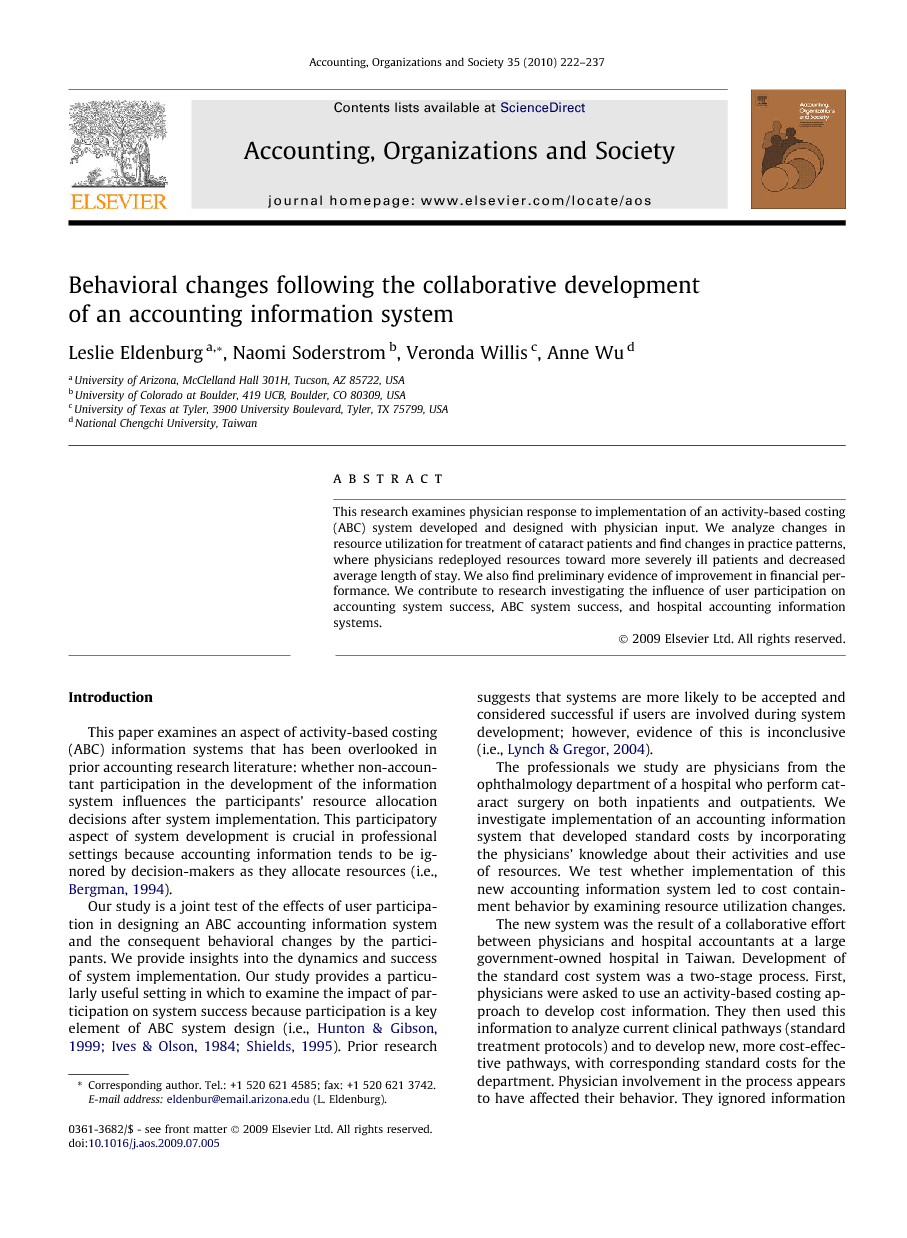 This research examines physician response to implementation of an activity-based costing (ABC) system developed and designed with physician input. We analyze changes in resource utilization for treatment of cataract patients and find changes in practice patterns, where physicians redeployed resources toward more severely ill patients and decreased average length of stay. We also find preliminary evidence of improvement in financial performance. We contribute to research investigating the influence of user participation on accounting system success, ABC system success, and hospital accounting information systems.

This paper examines an aspect of activity-based costing (ABC) information systems that has been overlooked in prior accounting research literature: whether non-accountant participation in the development of the information system influences the participants’ resource allocation decisions after system implementation. This participatory aspect of system development is crucial in professional settings because accounting information tends to be ignored by decision-makers as they allocate resources (i.e., Bergman, 1994). Our study is a joint test of the effects of user participation in designing an ABC accounting information system and the consequent behavioral changes by the participants. We provide insights into the dynamics and success of system implementation. Our study provides a particularly useful setting in which to examine the impact of participation on system success because participation is a key element of ABC system design (i.e., Hunton and Gibson, 1999, Ives and Olson, 1984 and Shields, 1995). Prior research suggests that systems are more likely to be accepted and considered successful if users are involved during system development; however, evidence of this is inconclusive (i.e., Lynch & Gregor, 2004). The professionals we study are physicians from the ophthalmology department of a hospital who perform cataract surgery on both inpatients and outpatients. We investigate implementation of an accounting information system that developed standard costs by incorporating the physicians’ knowledge about their activities and use of resources. We test whether implementation of this new accounting information system led to cost containment behavior by examining resource utilization changes. The new system was the result of a collaborative effort between physicians and hospital accountants at a large government-owned hospital in Taiwan. Development of the standard cost system was a two-stage process. First, physicians were asked to use an activity-based costing approach to develop cost information. They then used this information to analyze current clinical pathways (standard treatment protocols) and to develop new, more cost-effective pathways, with corresponding standard costs for the department. Physician involvement in the process appears to have affected their behavior. They ignored information from the previous standard cost system, but appeared to use information from the new system to reduce resource usage and overall patient costs.1 After the new system was in place, there is also evidence that physicians changed their behavior and decision-making as they redeployed resources and focused on sicker patients. Our results have implications for healthcare and other professional organizations where professionals make decisions about resource use, and thereby, the financial performance of the organization. Typically, professionals are not involved in accounting information system development. Our results suggest that including professionals in system development may lead to changes in behavior and improve their resource allocation decisions. We contribute to several streams of accounting research literature. Prior research on the benefits of user participation gauges system performance by measuring self-reported user satisfaction scores (i.e., Foster and Swenson, 1997, Shields, 1995 and Swenson, 1995). We provide empirical results indicating that involvement in system design leads to actual changes in resource deployment and improved financial performance. This study is also one of the first to identify non-accountant participation as a crucial factor in the success of ABC information systems. The remainder of the paper is organized as follows. Section 2 sets our study within a theoretical context and develops our hypotheses. Section 3 presents a description of the study setting and describes our data collection and research methodology. Section 4 describes results of our empirical tests and Section 5 concludes the paper.