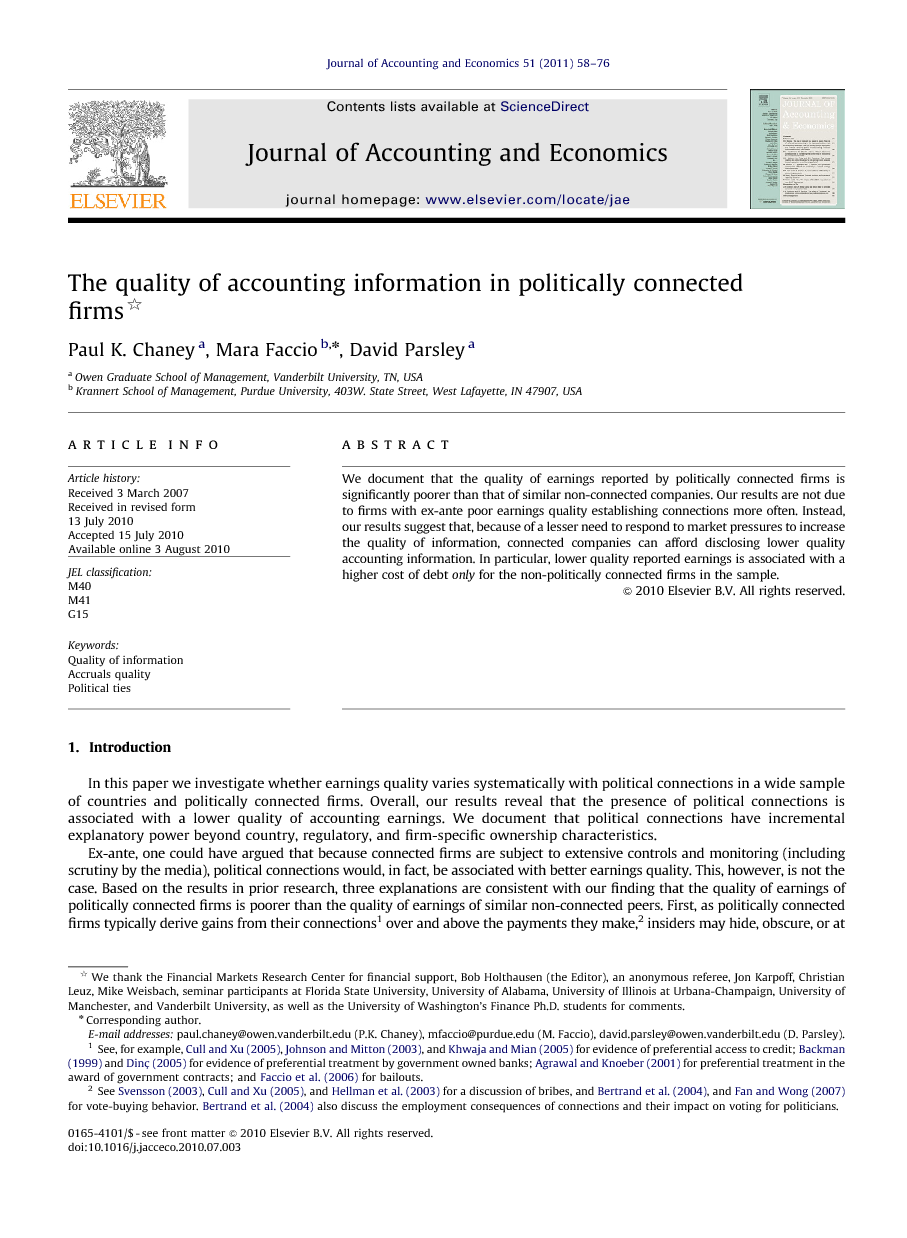 We document that the quality of earnings reported by politically connected firms is significantly poorer than that of similar non-connected companies. Our results are not due to firms with ex-ante poor earnings quality establishing connections more often. Instead, our results suggest that, because of a lesser need to respond to market pressures to increase the quality of information, connected companies can afford disclosing lower quality accounting information. In particular, lower quality reported earnings is associated with a higher cost of debt only for the non-politically connected firms in the sample.

This study documents that the quality of reported accounting information is systematically poorer for firms with political connections than for firms lacking such connections. This conclusion is based on an analysis of accounting data for over 4500 firms in 19 countries. Political connections appear to be an important predictor of accounting quality even after controlling for several commonly used country-level variables such as the overall level of corruption, or shareholder rights indicators, and for firm-specific factors (ownership structure, size, growth, leverage, market-to-book ratios, or the volatility of cash flows or sales growth). While connections are associated with poorer accruals quality ex-post, the quality of prior accruals does not explain a firm’s propensity to establish a connection in a given period. Thus, we rule out that it is simply the case that firms with poor accruals quality end up establishing political connections. Two other non-mutually exclusive possible hypotheses are consistent with our results. First, it may be that connected companies intentionally disclose low quality information in an attempt to mislead investors so that insiders can gain at their expense. Second, it may be that, because of the protection they enjoy once connections are established, connected firms face a lesser need to devote time and care to managing discretionary accruals. While we cannot directly test the first hypothesis, we do provide support for the second. Previous research has found that there are costs associated with lower quality accounting information. Our results are consistent with this finding, but with a twist. In particular, we provide evidence that lower quality reported earnings is associated with a higher cost of debt only for the non-politically connected firms in the sample. That is, companies that have political connections apparently face little negative consequences from their lower quality disclosures. To check the robustness of these results we have considered alternative measures of earnings quality, as well as using several different estimation approaches. We have also estimated models using transformed dependent variables, including a logistic transformation, and we have re-run the regressions eliminating countries one at a time. The results are robust to these alternative specifications. Our result that political connections mitigate the costs of poor accounting quality is closely related to Leuz and Oberholzer-Gee’s (2006) finding that political connections reduce the benefits of foreign financing. Additionally, Mitton (2002) finds these benefits may be substantial, particularly during a crisis. Both findings suggest that political connections are a source of domestic benefits that can substitute for other mechanisms or practices that create benefits for firms, such as cross-listing or transparency.