عنوان انگلیسی
The impact of introductory accounting courses on student perceptions about the purpose of accounting information and the objectives of business: A comparison of the UK and Japan
دانلود فوری مقاله + سفارش ترجمه 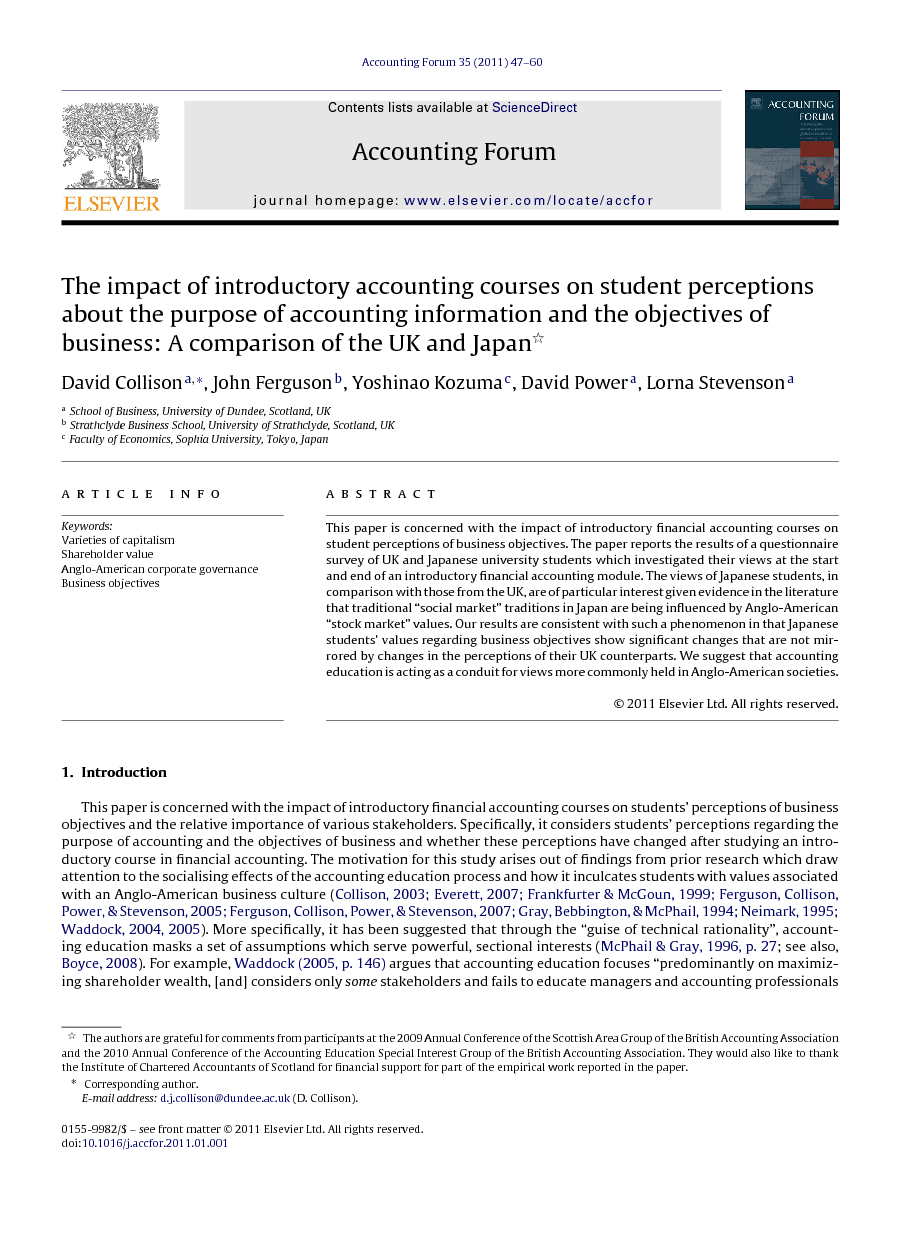 This paper is concerned with the impact of introductory financial accounting courses on student perceptions of business objectives. The paper reports the results of a questionnaire survey of UK and Japanese university students which investigated their views at the start and end of an introductory financial accounting module. The views of Japanese students, in comparison with those from the UK, are of particular interest given evidence in the literature that traditional “social market” traditions in Japan are being influenced by Anglo-American “stock market” values. Our results are consistent with such a phenomenon in that Japanese students’ values regarding business objectives show significant changes that are not mirrored by changes in the perceptions of their UK counterparts. We suggest that accounting education is acting as a conduit for views more commonly held in Anglo-American societies.

This paper is concerned with the impact of introductory financial accounting courses on students’ perceptions of business objectives and the relative importance of various stakeholders. Specifically, it considers students’ perceptions regarding the purpose of accounting and the objectives of business and whether these perceptions have changed after studying an introductory course in financial accounting. The motivation for this study arises out of findings from prior research which draw attention to the socialising effects of the accounting education process and how it inculcates students with values associated with an Anglo-American business culture (Collison, 2003, Everett, 2007, Frankfurter and McGoun, 1999, Ferguson et al., 2005, Ferguson et al., 2007, Gray et al., 1994, Neimark, 1995, Waddock, 2004 and Waddock, 2005). More specifically, it has been suggested that through the “guise of technical rationality”, accounting education masks a set of assumptions which serve powerful, sectional interests (McPhail & Gray, 1996, p. 27; see also, Boyce, 2008). For example, Waddock (2005, p. 146) argues that accounting education focuses “predominantly on maximizing shareholder wealth, [and] considers only some stakeholders and fails to educate managers and accounting professionals about all of the consequences of their decisions”. Similarly, Collison (2003, p. 861) highlights how the assumptions of Anglo-American capitalism underpin much of what is taught on accounting courses and that this is particularly apparent through the emphasis accorded to the interests of shareholders. He states: “Attention to the interests of shareholders above all other groups is implicit in much of what is taught to accounting and finance students. The very construction of a profit and loss account… is a continual, and usually unstated, reminder that the interests of only one group of stakeholders should be maximized”. The current paper aims to add to the existing literature by reporting the results of a questionnaire survey of UK and Japanese university students about how their views change in the period during which they study an introductory financial accounting module. Of course a financial accounting module is only one of several courses which students will encounter in the first year of a business-oriented degree; their views will have developed due to a range of influences. Nevertheless the locus of this investigation is the first financial accounting course which was a common factor amongst those surveyed and which is generally a key introduction to the “language of business”. The views of Japanese students, in comparison with those from the UK, are of particular interest given the traditional differences that have existed in the socio-economic traditions and business practices between the two countries (see, for example, Dore, 1986, Dore, 2000, Hutton, 1995 and Learmount, 2002) and the changes that have occurred in Japan over the last decade or so (see Charkham and Ploix, 2005, Dore, 2006a and Yonekura, 2009). For example, as Dore (1983, p. 470) points out, “The Japanese… have never really caught up with Adam Smith. They have never managed actually to bring themselves to believe in the invisible hand” (italics in original). By contrast Anglo-American economies promulgate self-interest as the key motivating principle underpinning human behaviour: reference is commonly made to Adam Smith's well-known assertion that, “It is not from the benevolence of the butcher, the brewer, or the baker that we expect our dinner, but from their regard to their own interest” (Smith, 1910/1776, p. 13). For the Japanese, however, this famous trio “need to be benevolent as well as self interested” (Dore, 1983, p. 470, emphasis in original); according to Dore: “benevolence is a duty. Full stop” (see also Sen, 1993). This is perhaps encapsulated by the pattern of relational trading in Japan, where there is a preference for inter-firm cooperation (known to “Japanese as grupu, and to foreigners, usually, as zaibatsu or keiretsu” (Dore, 1983, p. 467)) “as opposed to arms-length, purely contractual, trading relations” (Dore, 2002, p. 119). In many respects, this worldview is reflected in the traditional “job for life” employment system and the traditional emphasis given in Japanese companies to the interests of employees. As Hofstede (1983, p. 88) notes of the Japanese, “people are very willing to perform if they are offered security in exchange”. Drawing on these observations of traditional Japanese business culture, the extant literature tends to refer to Japan as having a “stakeholder” orientated approach to economic organisation, rather than a “shareholder” orientated approach (Donaldson and Preston, 1995 and Turner, 2002). However, more recently, researchers have drawn attention to various socio-cultural factors which, they argue, have precipitated a demise in traditional Japanese business values. These issues will be explored further in the literature review section of the paper. The remainder of this paper is structured as follows: the following section discusses the relevant literature in this area while the next section outlines the method used in this research: a two-stage questionnaire was distributed to first year students at UK and Japanese university institutions. Specifically, the views of students at three UK and one Japanese institution were sought at the start and end of their first university financial accounting module. Students’ perceptions about the purpose of accounting and the objectives of business were ascertained. The subsequent section describes the findings from the research. The results are analysed under three headings: namely, users of accounting information, the objectives of business, and normative perceptions of the objectives of business. The penultimate section provides a discussion of the findings while the final section outlines the limitations of the study.

These results provide some evidence of the influential role that can be played by accounting education in transforming the awareness and normative perspectives of students regarding business objectives. In the case of UK students, initial strong support for maximisation of shareholder value as a business objective did not show a statistically significant change during the period. Given that the “rhetoric of shareholder value” has been deeply embedded in the discourse of accounting and finance in the UK since at least the early 1990s, it is perhaps not surprising that accounting students in the UK exhibited strong support for this objective. For the Japanese students the increase in support for this position was striking and highly significant from a statistical point of view. The attitudes of Japanese and UK students towards this question were significantly different at the start of the period with much less support from the Japanese students: this difference was largely eroded by the end of their introductory studies. The changes observed are consistent with the period of study causing a marginalisation of traditional Japanese values (Yonekura, 2009). Evidence has also been cited about the consequences for Japanese society of changes in perceptions about the interests that business should serve. We would argue that, notwithstanding inevitable limitations in the research design, the results reported in this paper provide some striking empirical evidence about the role that an accounting education can play in contributing to such societal change. As noted earlier in this paper, the rhetoric of shareholder value has perhaps become more “shrill” in an Anglo-American context since the 1980s. As Froud et al. (2006) point out, one of the “real consequences” of this discourse has been growing income inequality, which has arguably contributed to a wide range of social health issues (Collison et al., 2007). Given these social outcomes, along with the contestability of the assumptions which underpin this rhetoric, it is imperative that accounting educators make “students aware of the contingent nature of many of the prescriptions and axioms that their courses take for granted” (Dore, 2006b, p. 18). According to Dore (2006b, p. 18) a course in “comparative capitalism” is one way of making students aware that the economy does not necessarily have to “work on the basis of self-interested behaviour” and that “self-interested rationality is itself a cultural product”. Further, given the evidence presented in this paper, such a course might arrest the “unproblematic consent” exhibited by Japanese students to the norms of Anglo-American business culture and limit the production of the “hegemonic agents of Anglo-American capitalism” (Saravanamuthu & Tinker, 2008, p. 133).