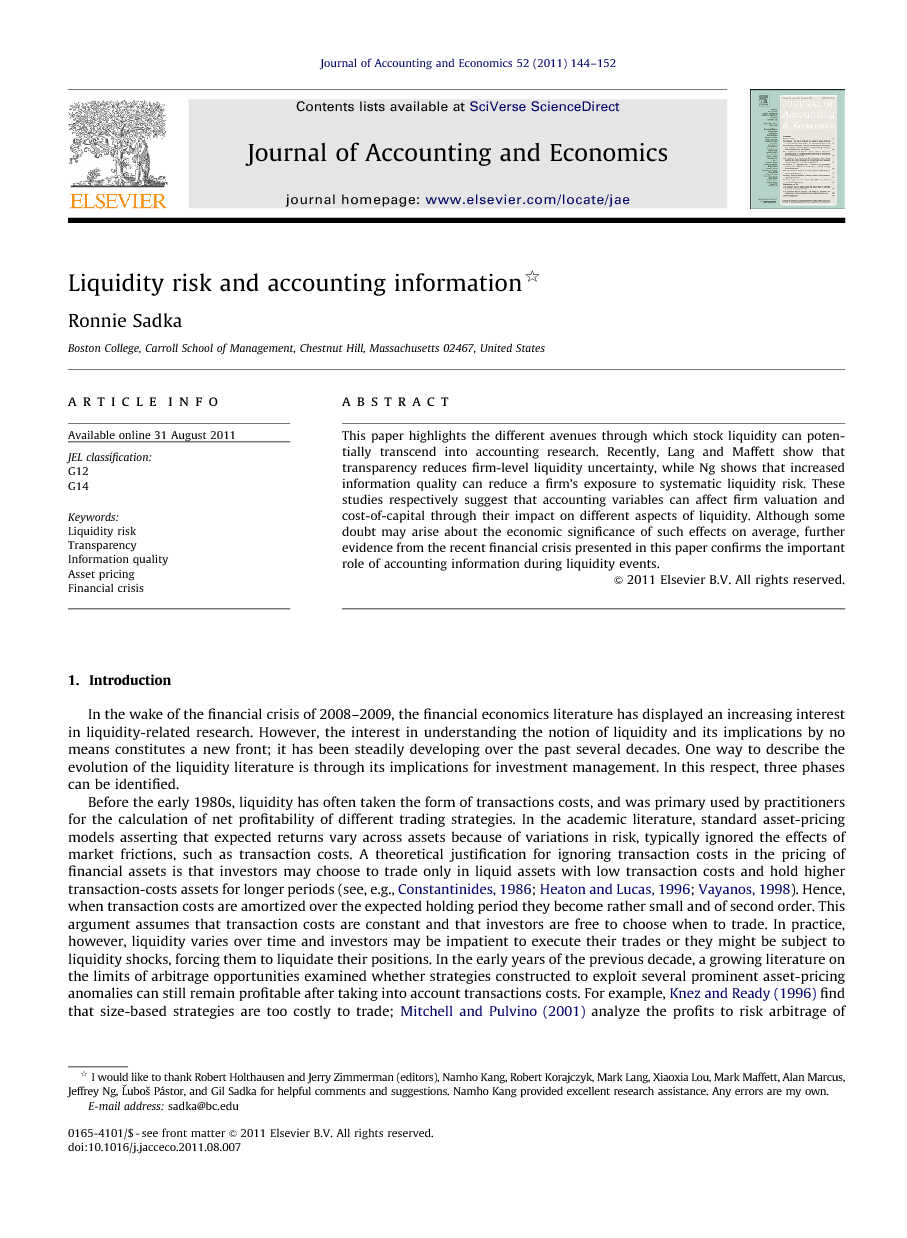 This paper highlights the different avenues through which stock liquidity can potentially transcend into accounting research. Recently, Lang and Maffett show that transparency reduces firm-level liquidity uncertainty, while Ng shows that increased information quality can reduce a firm's exposure to systematic liquidity risk. These studies respectively suggest that accounting variables can affect firm valuation and cost-of-capital through their impact on different aspects of liquidity. Although some doubt may arise about the economic significance of such effects on average, further evidence from the recent financial crisis presented in this paper confirms the important role of accounting information during liquidity events

In the wake of the financial crisis of 2008–2009, the financial economics literature has displayed an increasing interest in liquidity-related research. However, the interest in understanding the notion of liquidity and its implications by no means constitutes a new front; it has been steadily developing over the past several decades. One way to describe the evolution of the liquidity literature is through its implications for investment management. In this respect, three phases can be identified. Before the early 1980s, liquidity has often taken the form of transactions costs, and was primary used by practitioners for the calculation of net profitability of different trading strategies. In the academic literature, standard asset-pricing models asserting that expected returns vary across assets because of variations in risk, typically ignored the effects of market frictions, such as transaction costs. A theoretical justification for ignoring transaction costs in the pricing of financial assets is that investors may choose to trade only in liquid assets with low transaction costs and hold higher transaction-costs assets for longer periods (see, e.g., Constantinides, 1986, Heaton and Lucas, 1996 and Vayanos, 1998). Hence, when transaction costs are amortized over the expected holding period they become rather small and of second order. This argument assumes that transaction costs are constant and that investors are free to choose when to trade. In practice, however, liquidity varies over time and investors may be impatient to execute their trades or they might be subject to liquidity shocks, forcing them to liquidate their positions. In the early years of the previous decade, a growing literature on the limits of arbitrage opportunities examined whether strategies constructed to exploit several prominent asset-pricing anomalies can still remain profitable after taking into account transactions costs. For example, Knez and Ready (1996) find that size-based strategies are too costly to trade; Mitchell and Pulvino (2001) analyze the profits to risk arbitrage of mergers and acquisitions; and Korajczyk and Sadka (2004) examine the profitability of momentum strategies.1 These empirical studies argue that transaction costs can impose a first-order effect on prices. With the increased availability of data, several empirical works study whether investors demand a premium for holding illiquid securities. For example, Amihud and Mendelson (1986) argue that investors demand a premium for relatively low liquidity stocks (measured by bid-ask spreads). Similarly, Brennan and Subrahmanyam (1996) find that stocks with higher price impacts earn higher future returns. Also, Easley et al. (2002) find that the level of liquidity, measured as the probability of information-based trade (PIN), carries a positive premium in asset prices. Therefore, this strand of the literature argues that liquidity not only can significantly affect net profitability, but it can also serve as an investment signal as it can predict future performance. Finally, recent studies focus on the systematic component of liquidity (liquidity risk) rather than on its actual idiosyncratic level (i.e., liquidity level). This strand of literature begins with studies that document the that firm-specific liquidity fluctuates over time, and also that there is a systematic, or market-wide component to these liquidity fluctuations (see, e.g., Chordia et al., 2000, Huberman and Halka, 2001 and Amihud, 2002). Pástor and Stambaugh (2003) show that systematic liquidity risk is a priced risk factor. They develop a measure of aggregate (market-wide) liquidity based on daily price reversals and show that assets whose returns covary highly with this aggregate liquidity measure (i.e., assets with high liquidity beta) earn high expected returns. Acharya and Pedersen (2005) employ the liquidity measure of Amihud (2002) to show that expected stock returns are a function of several terms: first, expected stock illiquidity and second, some covariances between stock return, stock illiquidity, market return, and market illiquidity. Sadka (2006) extends the literature on liquidity risk and identifies the component of liquidity risk that is related to existing asset-pricing anomalies, such as stock price momentum (see Jegadeesh and Titman, 1993) and the post-earnings-announcement drift (see Ball and Brown, 1968). Korajczyk and Sadka (2008) show that liquidity risk is priced in the cross-section of stock returns even after controlling for firm liquidity level. In sum, the empirical literature about liquidity and asset pricing has shown that liquidity can be used to calculate net profitability of trading strategies, and that both the liquidity level and the liquidity risk (beta) are priced in the cross-section of stock. The purpose of this article is to examine the recent work of Lang and Maffett (this issue) as well as that of Ng (this issue). I attempt to position these works in the literature, offer some critiques, replicate some of the results, and provide some further evidence to highlight the significance of the findings of these works.

The main two studies discussed here, Lang and Maffett and Ng, study the relation between accounting information and different aspects of liquidity risk. These studies have several common elements. First, despite some of my criticism above, both studies convincingly demonstrate that accounting variables affect liquidity. Second, however, neither papers provide a clear economic motivation for their empirical work: the theoretical arguments mainly focus on firm-level liquidity, not liquidity risk. For example, Lang and Maffett discuss uncertainty about fundamental value during liquidity episodes, however, the literature considers such uncertainty as affecting the level of liquidity; it is yet unclear how to think about the volatility of liquidity in this context. The arguments in Ng lack the intuition for the reasons why information quality would affect the systematic component of liquidity, i.e. liquidity beta, not only liquidity level. Third, while both papers show their respective effects are statistically significant, they also attempt to quantify their economic significance. Throughout their paper, Lang and Maffett calculate the percent change in the dependent variable as a result of moving between the 10th and 90th percentiles of the independent variable. I would recommend reporting also the incremental R2 of the independent variable (after including control variables and fixed effects). Ng argues that about 50% of liquidity risk can be explained by information quality, however this figure is difficult to reconcile with the insignificant price premium for information quality. Finally, both works stress that their findings are further strengthened during financial crisis periods. Their results suggest that firms with enhanced accounting variables, such as transparency and information quality, provide protection to their investors during liquidity crises. It is these final sets of results that I find the most compelling. To highlight the significance of accounting information during liquidity crises, I follow Lou and Sadka (2011) and run cross-sectional regressions of the form where Ri,t→t+j is the cumulative return of stock i for the period t through t+j, ILLIQi is the illiquidity measure of Amihud (2002) estimated using daily data over 2007, View the MathML source is the liquidity beta estimated through regression (4) over the period 2003–2007 (where the dependent variable is the monthly return of firm i), IQi is the aggregate information quality measure calculated at the end of 2007, and ηi,j is an error term. Month t is September 2008, and j receives values of 0–15. In other words, 16 time intervals are considered: all beginning in September 2008 and ending in each of the subsequent months through December 2009. Table 3 reports the regression coefficients, t-statistics, and R2. To ease the comparison with Lou and Sadka (2011), I use a similar sample that includes only NYSE-listed firms whose stock price is above $1 at the end of 2007. There are several interesting results. First, consistent with Lou and Sadka (2011), illiquidity exhibits a positive and significant coefficient during September 2008, suggesting a panic effect in the beginning of the crisis as investors sold their liquid assets in the attempt to close their positions quickly. Second, liquidity betas have significant negative coefficients almost throughout the entire period, which confirms the out-of-sample predictability of the measure of covariance, that is, firms with a high liquidity beta are expected to underperform during liquidity shocks. Third, information quality is significantly positive throughout the period—it increases from September 2008 to March 2009 and decreases back to its initial level by the end of 2009. This suggests a flight-to-(information)-quality effect, that is investors hold on to or buy high-information-quality firms and sell low-information-quality firms during crisis periods. Fourth, the interaction of illiquidity and information quality is significant—this is consistent with the notion that investors would tend to invest in illiquid stocks whose information quality is high. Finally, the regression R2s seem relatively high given that the regressions are estimated using individual firms, implying that liquidity-related variables and information quality seem to explain a significant proportion of the cross-sectional variation in stock returns during the financial crisis. To complement the regression analysis, Fig. 2 plots buy-and-hold returns of portfolios double sorted by illiquidity and information quality (3-by-3) at the end of 2007. Specifically, the figure plots the information quality return spread for the top and bottom terciles of illiquidity. The figure shows that the information quality return spread is positive during the crisis period (September 2008–March 2009), especially for the group of illiquid stocks. Overall, the results of the regression analysis are consistent with those of the portfolio analysis and provide further evidence for the protection that high-information-quality firms offer to investors during crisis periods.