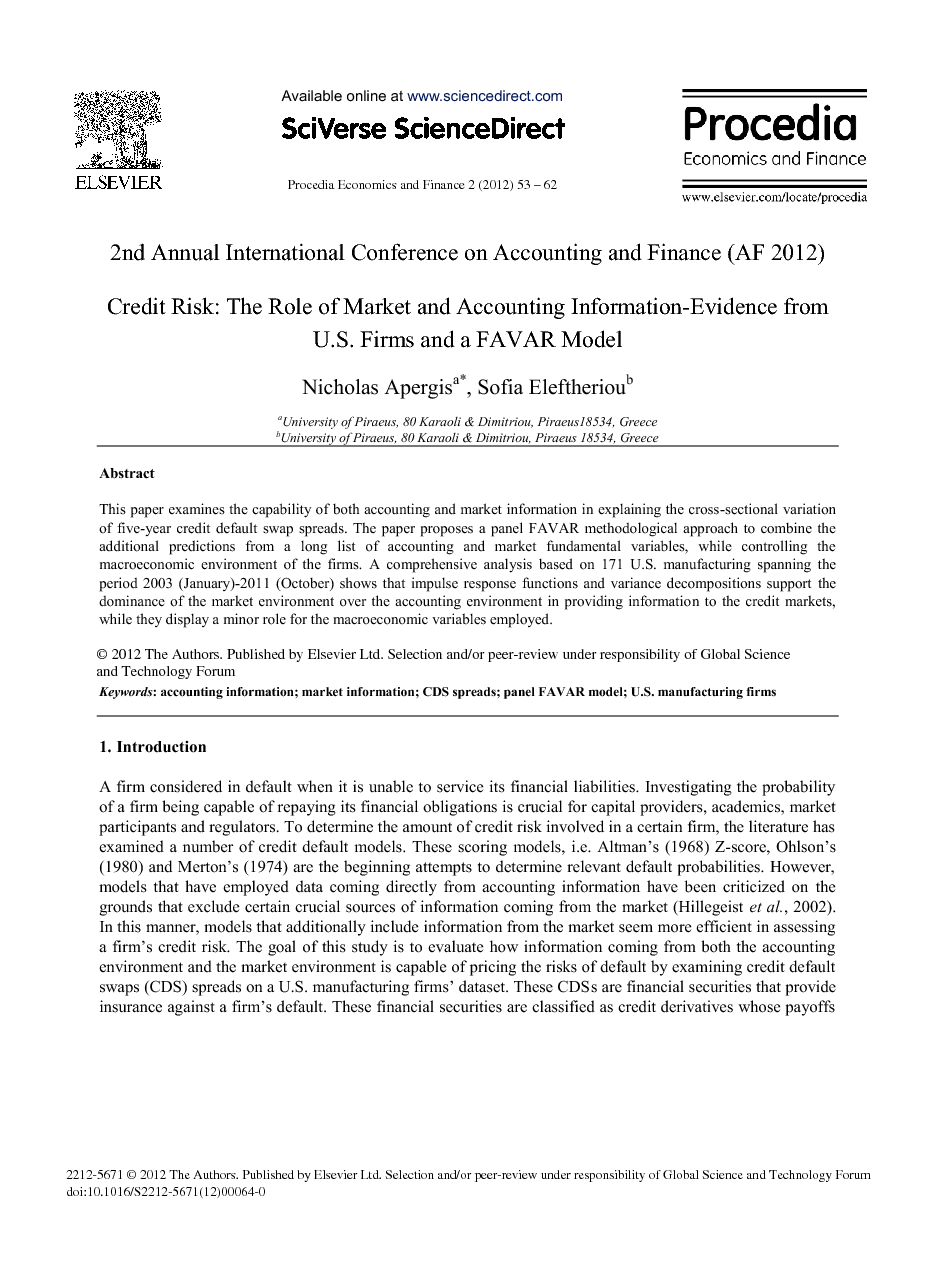 This paper examines the capability of both accounting and market information in explaining the cross-sectional variation of five-year credit default swap spreads. The paper proposes a panel FAVAR methodological approach to combine the additional predictions from a long list of accounting and market fundamental variables, while controlling the macroeconomic environment of the firms. A comprehensive analysis based on 171 U.S. manufacturing spanning the period 2003 (January)-2011 (October) shows that impulse response functions and variance decompositions support the dominance of the market environment over the accounting environment in providing information to the credit markets, while they display a minor role for the macroeconomic variables employed.

A firm considered in default when it is unable to service its financial liabilities. Investigating the probability of a firm being capable of repaying its financial obligations is crucial for capital providers, academics, market participants and regulators. To determine the amount of credit risk involved in a certain firm, the literature has examined a number of credit default models. These scoring models, i.e. Altman’s (1968) Z-score, Ohlson’s (1980) and Merton’s (1974) are the beginning attempts to determine relevant default probabilities. However,models that have employed data coming directly from accounting information have been criticized on the grounds that exclude certain crucial sources of information coming from the market (Hillegeist et al., 2002).In this manner, models that additionally include information from the market seem more efficient in assessing a firm’s credit risk. The goal of this study is to evaluate how information coming from both the accounting environment and the market environment is capable of pricing the risks of default by examining credit default swaps (CDS) spreads on a U.S. manufacturing firms’ dataset. These CDSs are financial securities that provide insurance against a firm’s default. These financial securities are classified as credit derivatives whose payoffs are tied to the issuer’s credit quality and they allow the trading of default risk separately from other sources of uncertainty (Ericsson et al., 2009). We should also point out that the reference firm (the one with a non-zero probability of defaulting on its liabilities) is not a party to the contract and is neither obliged to pay anything nor it is necessary for the buyer or seller to obtain the firm’s consent to enter a CDS contract, while the buyer pays a periodic premium, i.e. the CDS spread, to the seller for a predetermined amount of time. In a case that a default event occurs, the seller is obliged to compensate the buyer. Without the presence of such a default event, the buyer continues to pay annuity premia until the end of maturity (Callen et al., 2009). The novelties of this study are: i) it combines both accounting and market information to explain credit risk, ii) unlike other studies, it uses CDS data, since the employment of actual default observations may not be reliable, because some default events are strategic decisions and, thus, may not correspond to economic defaults, while some financially distressed firms may not be capable of negotiating debt restructuring to avoid default and certain informal resolutions are difficult to identify (Duffie et al., 2007) or the employment of implied default probability from the Merton (1974) model could not be confounded by the oversimplified assumptions behind that model, iii) it makes use of a U.S. sample that allows the employment of a large sample, and, finally, iv) it makes use of a new methodological approach, i.e. the factor augmented vector autoregressive (FAVAR) model (Bernanke et al., 2005), that although it uses a rather wide list of fundamental (both accounting and market) variables, it economizes on its estimation procedure by reducing them to a small number of factors. In other words, we gear our estimation toward exploiting the information on the common components of accounting and market variables’ movements in a large cross section of time series. To this end, we employ the FAVAR techniques. Therefore, we are able to derive results for the variation in responses of a large variety of variables to the identified shocks.The rest of the paper is structured as follows. Section 2 presents the literature on default prediction, on credit risk (CDSs) determinants as well as on the role of macroeconomic environment. Section 3 discusses the hypotheses tested, while Section 4 describes the data sources and sample construction details, while Section 5 presents the empirical analysis and discusses the findings. Finally, Section 6 concludes.

This empirical study investigated the relevance of accounting versus the market information to the credit markets, as they are proxied by the CDS spreads. Using a sample of 171 U.S. manufacturing firms and the FAVAR modeling approach, the empirical findings showed that: impulse response analysis has confirmed that market information is more relevant vis-à-vis accounting information for the credit markets. The results imply that the information from the accounting environment of the firm is considered inherently backwardlooking by the credit markets as measures of credit risk, while it is disclosed somewhat infrequently, a fact that seems to further decay its relevance to investors. By contrast, market information seems to provide more relevant information to providers of debt capital since it relies on rigorous financial theory. Finally, although statistically significant, the macroeconomic variables do not seem to have a leading role in providing information to the credit markets.Further research extensions will focus on looking at volatility spillovers through a multivariate GARCH framework, while an interesting exploration would be to study either other geographical areas, i.e. European or Asian manufacturing firms, or the differences between geographical areas with dissimilar accounting policies and regulations. Finally, in case that we need to know the separate impact of variables that are within each common factor, then a simple VAR model has to be employed.