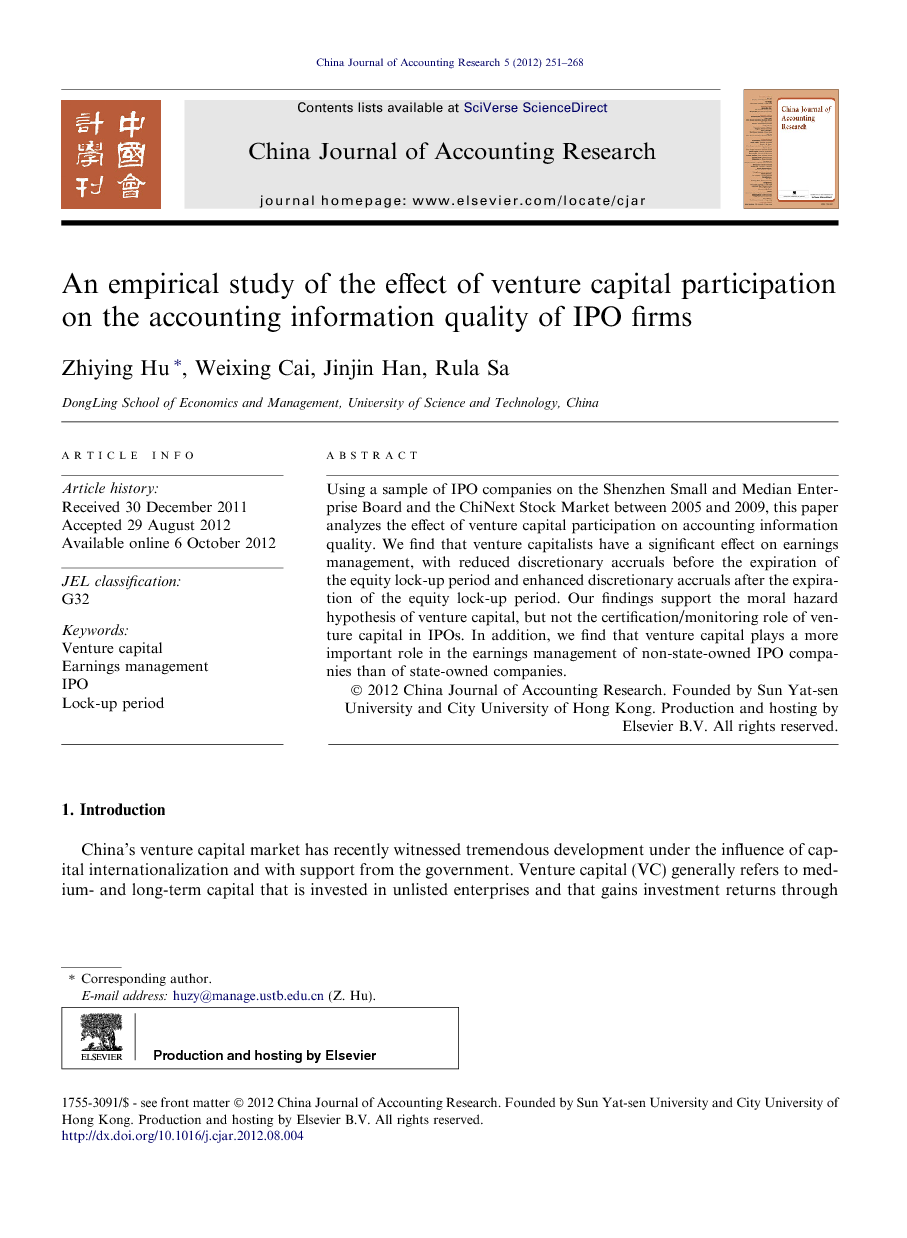 Using a sample of IPO companies on the Shenzhen Small and Median Enterprise Board and the ChiNext Stock Market between 2005 and 2009, this paper analyzes the effect of venture capital participation on accounting information quality. We find that venture capitalists have a significant effect on earnings management, with reduced discretionary accruals before the expiration of the equity lock-up period and enhanced discretionary accruals after the expiration of the equity lock-up period. Our findings support the moral hazard hypothesis of venture capital, but not the certification/monitoring role of venture capital in IPOs. In addition, we find that venture capital plays a more important role in the earnings management of non-state-owned IPO companies than of state-owned companies.

China’s venture capital market has recently witnessed tremendous development under the influence of capital internationalization and with support from the government. Venture capital (VC) generally refers to medium- and long-term capital that is invested in unlisted enterprises and that gains investment returns through IPOs, mergers, acquisitions, liquidations and transferring the equity of portfolio firms.1 IPOs are the most popular exit strategy because they bring the highest returns on VC investments. Thus, venture capitalists (VCs) are the main participants in IPO activities and their behavior has a significant influence on the operation of the capital market. Accounting information is one of the major sources of information for the capital market. Higher accounting information quality makes the allocation of capital market resources more efficient and gives investors more protection. Therefore, to protect investors more effectively, the effect of the participation of VCs on the accounting information quality of IPO firms has received much attention. Based on the framework of asymmetric information, Barry et al. (1990) and Sahlman (1990) proposed the certification/monitoring hypothesis. Under this hypothesis, VCs as professional investors play a certification role in the identification of the portfolio firm’s intrinsic value. To reduce agency costs and increase the value of portfolio firms, VCs as large shareholders will actively monitor the portfolio firms, including their accounting information quality. Compared to companies without VC support, the earnings quality of VC-backed IPO companies should be better. In contrast, Gompers (1996) and Lee and Wahal (2004) argue that the limited lifetime and special organizational structure of IPO companies mean that VCs must pay attention to how to get back their original investment and receive high returns, so VCs are likely to participate in portfolio firms’ IPO activities opportunistically and have moral hazard problems. This hypothesis implies that VCs may collude with portfolio firms or exert pressure on management, using their own professional advantages or social networks2 with underwriters and government, to help the management of IPO firms manage accounting earnings before and during the IPO, thereby increasing the IPO price and increasing their investment return following the IPO. Institutional theory holds that the beliefs, goals and behavior of individuals and groups are influenced by various institutional environments (Scott, 1987 and Scott, 1995). Particular institutional environments will inevitably lead to particular venture capital IPO behavior, including the effect on accounting information quality in IPO companies. Compared with the US market, China’s market has some special features. For example, the Chinese government provides considerable guidance and support for VCs to promote innovation. In September 1985, the State Council officially approved the establishment of the New Technology Venture Investment Company, China’s first franchised venture capital company. Since then, many VCs have been established with the support of local governments, such as Beijing Venture Capital, Shanghai Venture Capital, Suzhou High-tech Investment Company and the Shenzhen High-tech Investment Company (Chen et al., 2011). However, the development of VCs in the US market is guided by market forces. Meanwhile, China’s stock market is a newly emerging market with a short history and relatively weak investor protection. Thus, to encourage long-term shareholding by VCs and reduce the negative effects of equity selling immediately after an IPO, the China Security Regulation Committee (CSRC) mandated a lock-up period regulation, which states that VCs are not allowed to sell their equity until at least 12 months after the IPO. In contrast, VCs in the US market can sell their equity immediately after the IPO. Most extant studies in this area are based on the mature Anglo-American market environment. Although some research focuses on emerging Asian markets, few studies discuss China’s market specifically. In this study, we use medium and small IPO firms in China from 2005 to 2009 as our sample, to study the participation of VCs on VC portfolio firms’ earnings management 1 year pre-IPO, in the IPO year and 1 year post-IPO, thus allowing a comprehensive analysis of the effect of VCs on accounting information quality before and after the expiration of the lock-up period. After controlling for the sample self-selection endogeneity problem, we find that the participation of VCs affects the earnings management of IPO firms. Earnings management is lower before the expiration of the lock-up period and higher after the lock-up period expires. The empirical evidence thus supports the moral hazard hypothesis. Furthermore, due to financing bottlenecks and the poor corporate governance of non-state-owned enterprises, the participation of VCs has a greater effect on the extent of earnings management for non-state-owned enterprises before and after the expiration of the lock-up period. The remainder of this paper proceeds as follows. Section 2 reviews the related literature, analyzes the institutional background in China and develops the hypotheses. Section 3 describes the research design and introduces the data and variables. Section 4 presents the empirical results. Section 5 concludes the paper.