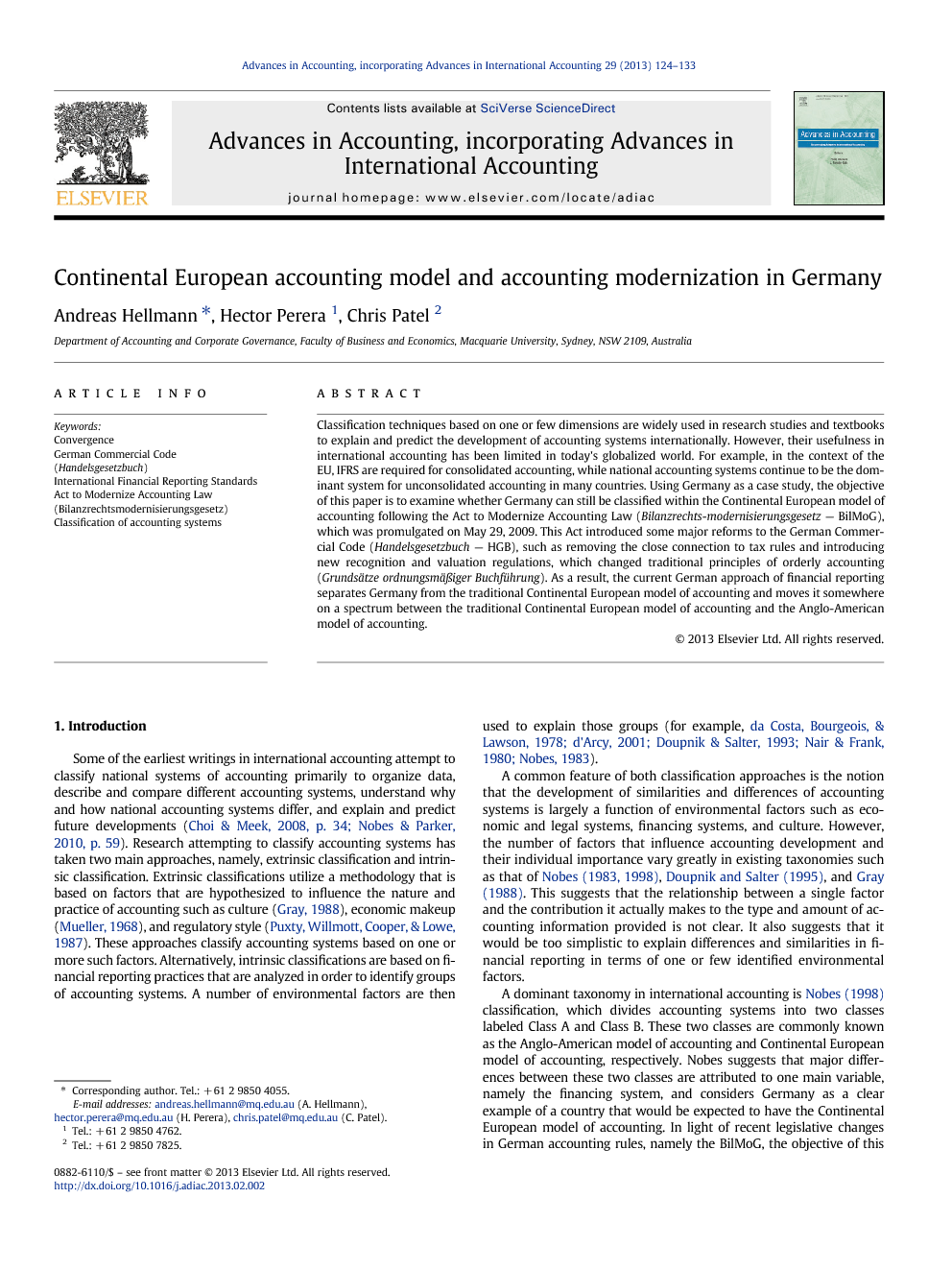 Classification techniques based on one or few dimensions are widely used in research studies and textbooks to explain and predict the development of accounting systems internationally. However, their usefulness in international accounting has been limited in today's globalized world. For example, in the context of the EU, IFRS are required for consolidated accounting, while national accounting systems continue to be the dominant system for unconsolidated accounting in many countries. Using Germany as a case study, the objective of this paper is to examine whether Germany can still be classified within the Continental European model of accounting following the Act to Modernize Accounting Law (Bilanzrechts-modernisierungsgesetz — BilMoG), which was promulgated on May 29, 2009. This Act introduced some major reforms to the German Commercial Code (Handelsgesetzbuch — HGB), such as removing the close connection to tax rules and introducing new recognition and valuation regulations, which changed traditional principles of orderly accounting (Grundsätze ordnungsmäßiger Buchführung). As a result, the current German approach of financial reporting separates Germany from the traditional Continental European model of accounting and moves it somewhere on a spectrum between the traditional Continental European model of accounting and the Anglo-American model of accounting.

Some of the earliest writings in international accounting attempt to classify national systems of accounting primarily to organize data, describe and compare different accounting systems, understand why and how national accounting systems differ, and explain and predict future developments (Choi and Meek, 2008 and Nobes and Parker, 2010). Research attempting to classify accounting systems has taken two main approaches, namely, extrinsic classification and intrinsic classification. Extrinsic classifications utilize a methodology that is based on factors that are hypothesized to influence the nature and practice of accounting such as culture (Gray, 1988), economic makeup (Mueller, 1968), and regulatory style (Puxty, Willmott, Cooper, & Lowe, 1987). These approaches classify accounting systems based on one or more such factors. Alternatively, intrinsic classifications are based on financial reporting practices that are analyzed in order to identify groups of accounting systems. A number of environmental factors are then used to explain those groups (for example, da Costa et al., 1978, d'Arcy, 2001, Doupnik and Salter, 1993, Nair and Frank, 1980 and Nobes, 1983). A common feature of both classification approaches is the notion that the development of similarities and differences of accounting systems is largely a function of environmental factors such as economic and legal systems, financing systems, and culture. However, the number of factors that influence accounting development and their individual importance vary greatly in existing taxonomies such as that of Nobes, 1983 and Nobes, 1998, Doupnik and Salter (1995), and Gray (1988). This suggests that the relationship between a single factor and the contribution it actually makes to the type and amount of accounting information provided is not clear. It also suggests that it would be too simplistic to explain differences and similarities in financial reporting in terms of one or few identified environmental factors. A dominant taxonomy in international accounting is Nobes (1998) classification, which divides accounting systems into two classes labeled Class A and Class B. These two classes are commonly known as the Anglo-American model of accounting and Continental European model of accounting, respectively. Nobes suggests that major differences between these two classes are attributed to one main variable, namely the financing system, and considers Germany as a clear example of a country that would be expected to have the Continental European model of accounting. In light of recent legislative changes in German accounting rules, namely the BilMoG, the objective of this paper is to examine whether Germany can still be classified within the Continental European model of accounting. By focusing upon Nobes (1998), we argue that comparative accounting research can be further enhanced by developing new taxonomies that are capable of examining the accounting environment of a country holistically instead of focusing on few selected factors. We focus upon the taxonomy proposed by Nobes (1998) for a number of reasons. First, this model is a revised version of a previous model (Nobes, 1983 and Nobes, 1992) that has been described as being precise in defining the object being classified, providing a hierarchy, and not containing data errors (Roberts, 1995). Second, it has been recently updated (Nobes, 2008) while other taxonomies have remained unchanged since their development (for example, Gray, 1988). Third, it maintains a dominant position in international accounting research and education. This is evident in the large number of studies that adopt this taxonomy such as Rahman, Yammeesri, and Perera (2010), Alexander and Eberhartinger (2009), Sellhorn and Gornik-Tomaszewski (2006), Delvaille, Ebbers, and Saccon (2005), Hope (2004), Tarca (2004), Schultz and Lopez (2001), Alexander and Archer (2000), Nobes and Roberts (2000), Flower (1997), and Doupnik and Salter (1993). Finally, Nobes' classification is a prominent topic in current textbooks on international accounting in which classifications are usually adopted as introduction and basis for further discussion (for example, Nobes & Parker, 2010, chapter 3; Doupnik & Perera, 2009, chapter 2; Choi & Meek, 2008, chapter 2; Radebaugh, Gray, & Black, 2006, chapter 2). Focusing on the changes that have taken place in Germany, we provide evidence to show that Nobes' classification may not be as valid to Germany. German accounting practices changed fundamentally as a result of the BilMoG, which was promulgated in the Federal Gazette (Bundesanzeiger) on May 19, 2009.3 These changes, for example, partially eliminate the relation between tax law and commercial law, and include accounting practices similar to IFRS, such as the recognition of internally generated intangible fixed assets and the application of fair value measurements for financial instruments. However, the factors that were used in Nobes' classification to explain accounting practices remain relatively unchanged. The current accounting education often promotes redundant and misleading information about the German accounting environment by uncritically relying on simplistic taxonomies for the classification of accounting systems. In Germany, as in many other European countries, IFRS are only required for consolidated financial statements of capital market orientated companies, and therefore, two accounting systems are used with the HGB as the dominant accounting system. This study is based on the data collected through interviews with key individuals and an online focus group with representatives of groups that are affected by changes in the accounting environment. Additionally, we introduce the reader to German language literature such as that related to the BilMoG.

Our discussion demonstrates that Germany changed many accounting practices which were described as typical characteristics for the Continental European model of accounting. However, it is also clear that the accounting environment still has features of the Continental European cluster such as credit-based financing. As such, this paper raises doubts about using the financing system variable for explaining accounting development in Germany. The HGB still remains the primary law for financial reporting in Germany, and it is mandatory for individual financial statements of all German companies by constituting the basis for dividends and other legal consequences. Further, the majority of German companies are sole proprietorships and private companies, which do not need to prepare financial statements according to IFRS (Statistisches Bundesamt, 2009). With the decision of the German government to launch the long and costly process leading to the BilMoG and not simply adopting IFRS, it is unlikely that IFRS will become mandatory for individual financial statements in the near future. The German government reconsidered the adoption of Anglo-American accounting practices, as reflected in the concerns expressed by the interviewees and participants of this study. Only selected practices from IFRS have been accepted and incorporated into the HGB. Through the highlighted changes, BilMoG improves the quality of annual financial statements prepared under the HGB. Major changes of the HGB include the abolition of the reverse authoritative principle and the introduction of fair value measurements. Many explicit policy options, such as the option to capitalize expenses related to the formation and expansion of the business operation and the option to disclose provisions for omitted maintenance expenses, have been removed. However, IFRS are not adopted for individual financial statements and the HGB remains the primary law for financial accounting in Germany. This shifts German accounting practices away from the practices typically described for the traditional Continental European model, but not entirely toward Anglo-American accounting practices. Importantly, the fundamental changes of the modernization are not solely driven by EU regulation but they address domestic concerns and changing economic environment. Whether Germany left the Continental European cluster or not also depends on developments in other countries. Other European countries such as France and Italy also modernized their accounting regimes. In the case of France, regulations have been modified toward IFRS much earlier than in Germany (Delvaille et al., 2005). It is likely that more European countries will modernize their accounting regimes and may decide to combine their local accounting practices with selected Anglo-American accounting practices like Germany. Further research is required to examine how other countries of the Continental European cluster modernized their accounting regimes. If, as might be expected, these countries change their accounting regimes toward IFRS to a different extent, the Continental European cluster may diverge further. On the other hand, it may be possible that the countries of the Continental European accounting model are moving as a block closer to the Anglo-American model while maintaining only few differences. Finally, it would appear that the BilMoG is likely to be an impediment to any effort to develop standardized financial reporting within the common market in Europe. However, the Federal Ministry of Finance (Bundesministerium der Finanzen), which is responsible for the EStG, has decided to gather ideas for a separate tax accounting, which is accelerated by the harmonization efforts within the EU in relation to a common consolidated corporate tax base (Participant 4). This would be used as a reason to allow entities to prepare individual financial statements based on the jurisdiction of choice. We suggest that explaining accounting practices in Germany using a single key independent variable is too simplistic and ignores other important drivers such as power relationships between stakeholder groups who influence the legislation process. Other lines of reasoning have to be found to prove the existence or the usefulness of differentiating an Anglo-American accounting or Continental European accounting cluster. We recommend that international accounting research will be enhanced by in-depth examinations of accounting environments rather than a narrow focus on quantification and classification.