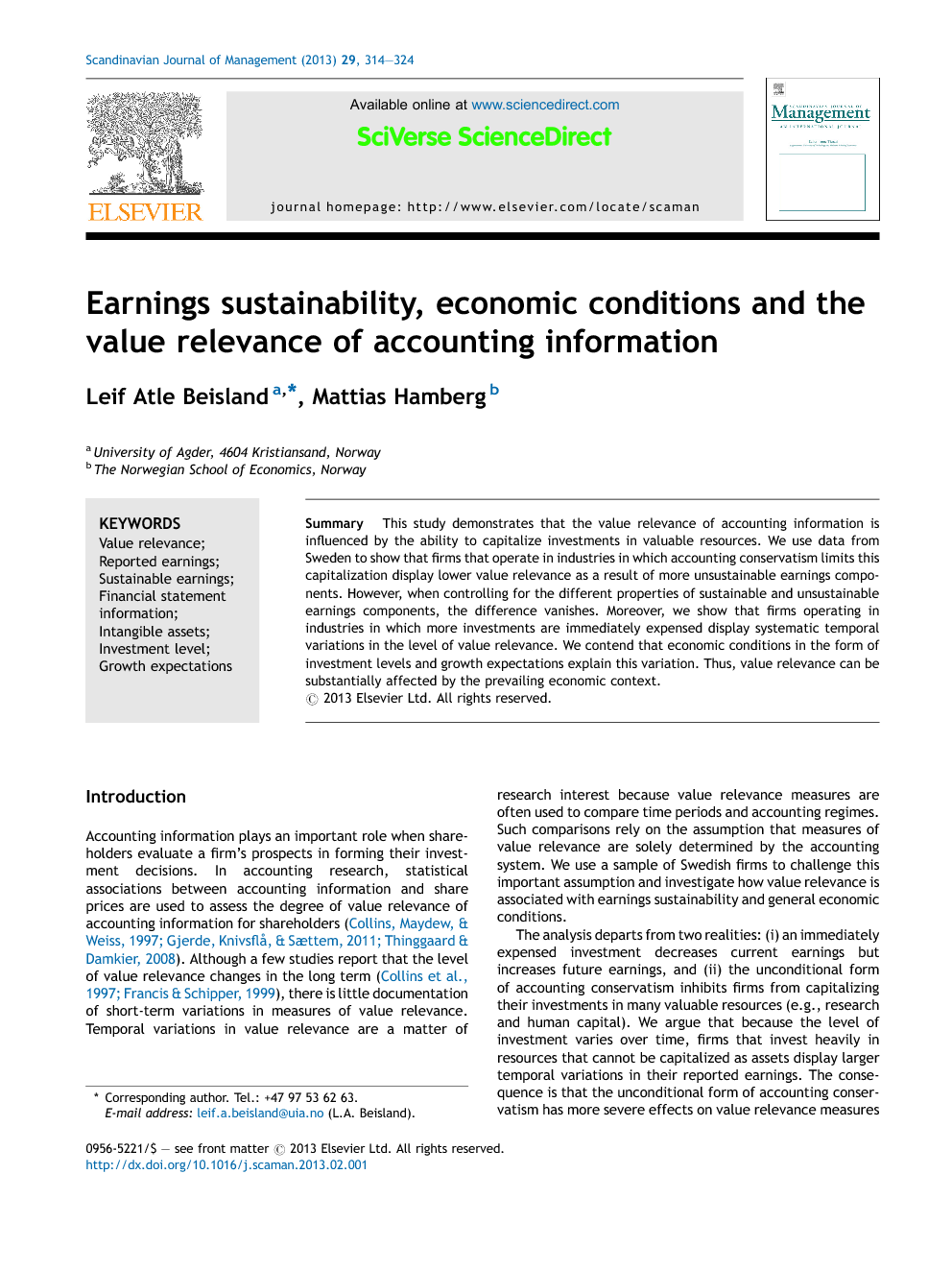 This study demonstrates that the value relevance of accounting information is influenced by the ability to capitalize investments in valuable resources. We use data from Sweden to show that firms that operate in industries in which accounting conservatism limits this capitalization display lower value relevance as a result of more unsustainable earnings components. However, when controlling for the different properties of sustainable and unsustainable earnings components, the difference vanishes. Moreover, we show that firms operating in industries in which more investments are immediately expensed display systematic temporal variations in the level of value relevance. We contend that economic conditions in the form of investment levels and growth expectations explain this variation. Thus, value relevance can be substantially affected by the prevailing economic context.

Conventional conservative accounting standards hinder firms from capitalizing some of their investments in valuable resources; rather, these investments are immediately expensed. The consequence of these behaviors is that earnings become more akin to cash flows; thus, when substantial investments are undertaken, earnings decrease, even when such investments actually increase future performance. We show that firms undertaking more investments that are immediately expensed have more unsustainable earnings and lower value relevance. However, the effects of these unsustainable earnings components on value relevance are easily removed in our models. When we eliminate these effects, there is no difference in value relevance between traditional and non-traditional industries. Although the models that are used to decompose reported earnings into its sustainable and unsustainable components can remove differences in the level of value relevance, these models are incapable of removing differences in the temporal variation in value relevance. Firms operating in non-traditional industries, in which more valuable resources cannot be capitalized, consistently show more variation in value relevance. Moreover, these variations are systematic over time and associated with our two measures of economic conditions: the level of investment and growth expectations. When investment levels and growth expectations are high, firms operating in non-traditional industries display considerably lower value relevance. This finding is consistent, independent of the earnings decomposition model that is used. The empirical results are strong and exhibit a high level of statistical significance. However, because the interpretation of the results is rather open, a caveat is necessary. In particular, the reader should note that our empirical measures are not perfect proxies of our theoretical constructs; thus, there is ample space for future research. Our analysis relies heavily on the distinction between traditional and non-traditional industries. Although there are differences between these two industry groups, we do not know the specific causes of these differences. We believe that non-traditional industries undoubtedly have more non-capitalized resources; however, firms in non-traditional industries might also be younger and less diversified, may grow more rapidly, and may have different ownership structures. It is beyond the scope of this paper to examine the effects of these other factors on value relevance. If such differences exist and are able to explain the level of and temporal variation in value relevance, then such an investigation would be an interesting endeavor. A similar caveat exists for the test of value relevance under different investment levels. Because the investments that we investigate are typically undetectable in financial statements (i.e., they are immediately expensed and bundled with all other expenses), we use growth rates at the country level as our proxy. This measure could be correlated with other macro-economic variables. In fact, we have already shown that the change in GDP per capita and the book-to-market ratio are highly correlated. The patterns in the empirical study are relatively clear, but the interpretation is somewhat open. Again, further research is needed. One of the most important objectives of value relevance research is to study differences in the usefulness of various accounting methods from an investor perspective. We believe that it is of utmost importance that varying proportions of unsustainable earnings and changing economic conditions do not distort researchers’ conclusions regarding value relevance in different time periods and under different accounting regulations. For this reason, the models we use to decompose reported earnings can serve as a departure point in future comparative analyses. Moreover, the fact that the level of value relevance is systematically associated with measures of economic conditions suggests that future comparative analyses should control for differences in the economic conditions – particularly when firms in the sample are likely to immediately expense many of their investments.