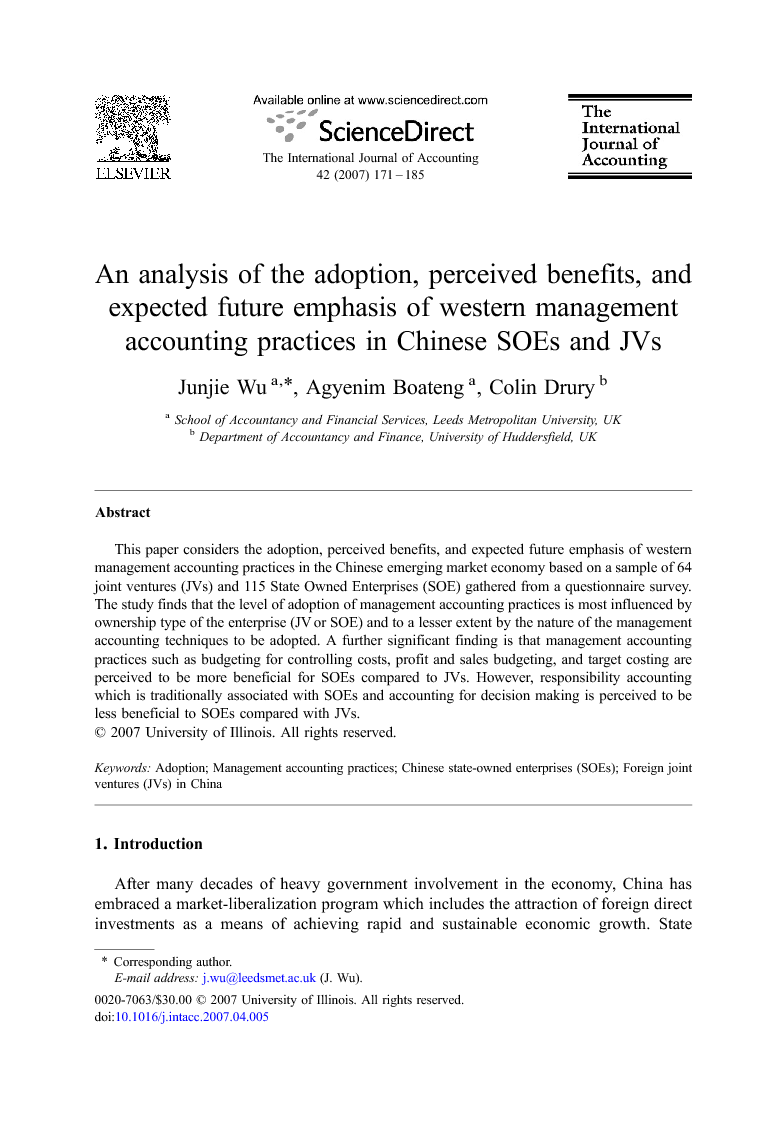 After many decades of heavy government involvement in the economy, China has embraced a market-liberalization program which includes the attraction of foreign direct investments as a means of achieving rapid and sustainable economic growth. State intervention in enterprise management – particularly through State-Owned Enterprises (SOEs), a significant feature of the Chinese centrally planned economy – is being systematically dismantled. Prior research evidence indicates that over the last decade the modernization and restructuring of SOEs have been placed at the top of the economic-reforms agenda (Lee, 2001). At the core of these reforms is the massive shift in opinion about the role of the state in enterprise management in China. Policy makers in China now believe that dynamic economic growth requires a greater role for the private sector. As a result, privatization of SOEs has been a key element of Chinese market reforms. It is thus argued that privatization of SOEs will not only lead to efficient and effective allocation of resources but will also enable managers to take more responsibility for the well-being of the enterprises they run (Boateng and Glaister, 1999 and Hassard et al., 1999). As privatization in China welcomes foreign investors, competition has heightened as monopoly positions granted to SOEs under the central-planning system have evaporated. This line of reasoning is consistent with the conclusion drawn by Child (1994). These changes in the business environment present challenges in terms of the coexistence of market forces and state influences (Child, 1994) and the organization of production and marketing (Lin, Cai, & Li, 1998). More importantly, these changes affect the information needs and processing techniques required to facilitate good decision making within firms. According to Firth (1996), the change towards a free-market enterprise system in China constitutes a major economic shock for many Sino companies, thereby leading to a serious performance gap, in that accounting systems developed under socialist philosophy are totally inadequate for the emerging capitalist structure. Institutional theory suggests that organizations will respond to environmental complexity brought about by the changing task and institutional environments by adapting their management practices needed to ensure their long-term survival (DiMaggio and Powell, 1983, DiMaggio and Powell, 1991 and O'Connor et al., 2004). In the context of China, Naughton (1995), Nee (1992), and Perkins (1994) argue that when a centrally planned system is dismantled, both the task and institutional environments become more uncertain and unpredictable which has implications for information needs for management decision making. The question is how do the Chinese SOEs adapt to meet the changing task and institutional environments as posited by institutional theory? A number of scholars such as Child and Markoczy (1993), Firth (1996), and Yan and Gray (1994) argue that reforms offer SOEs engaged in foreign joint ventures (JVs) an opportunity to model their foreign partner's capitalist-style management systems and management accounting practices. Others studies such as Kimberly (1980), Meyer and Rowan (1977), DiMaggio and Powell (1983) suggest that the opportunity to diffuse management ideas in a changing environment is not limited to foreign-partnered JVs, but extends across companies nationwide. Guthrie (1999) supports this line of reasoning and points out that the change in environment provides both impetus and opportunity for mimetic isomorphism, where SOEs perceive legitimate foreign enterprises as models to imitate. Unlike Western economies, we know little about management accounting practices in the Chinese emerging capitalist economy. The few studies investigating management accounting practices in China, for example, Lin, Cai, and Li (1998), Firth (1996), and O'Connor, Chow, & Wu (2004) have focused on the factors influencing the adoption of management accounting practices in either SOEs or JVs, but no attention has been paid to the benefits of adopting management accounting practices. Modernization and internationalization of the Chinese economy since the 1980s have raised a number of questions, however some critics suggest that internationalization and economic reforms have destroyed China's long-term policy of self-reliance. Others contend that Western management accounting practices are unsuited to Chinese circumstances and, when adopted, have failed to meet expectations (Yang, 1999). In order to increase the adoption rate of traditional and contemporary management accounting practices in Chinese companies, we investigate the perceived benefits of such adoption. This paper examines data we collected from a survey to provide new empirical insights into management accounting practices in both SOEs and JVs in China with the aims of examining the adoption of management accounting practices in both Chinese SOEs and JVs; (2) considering the comparative perceived benefits derived by Chinese SOEs and JVs in adopting capitalist-style management accounting practices over a five-year period; and to consider the emphasis that SOEs and JVs intend to place on particular management accounting practices in the future. The remainder of this paper is structured as follows: the next section reviews literature on the existing management accounting practices under the socialist system. The research method used is presented in Section 3. The Section 4 presents the results and discussion. The final section contains the summary and conclusions