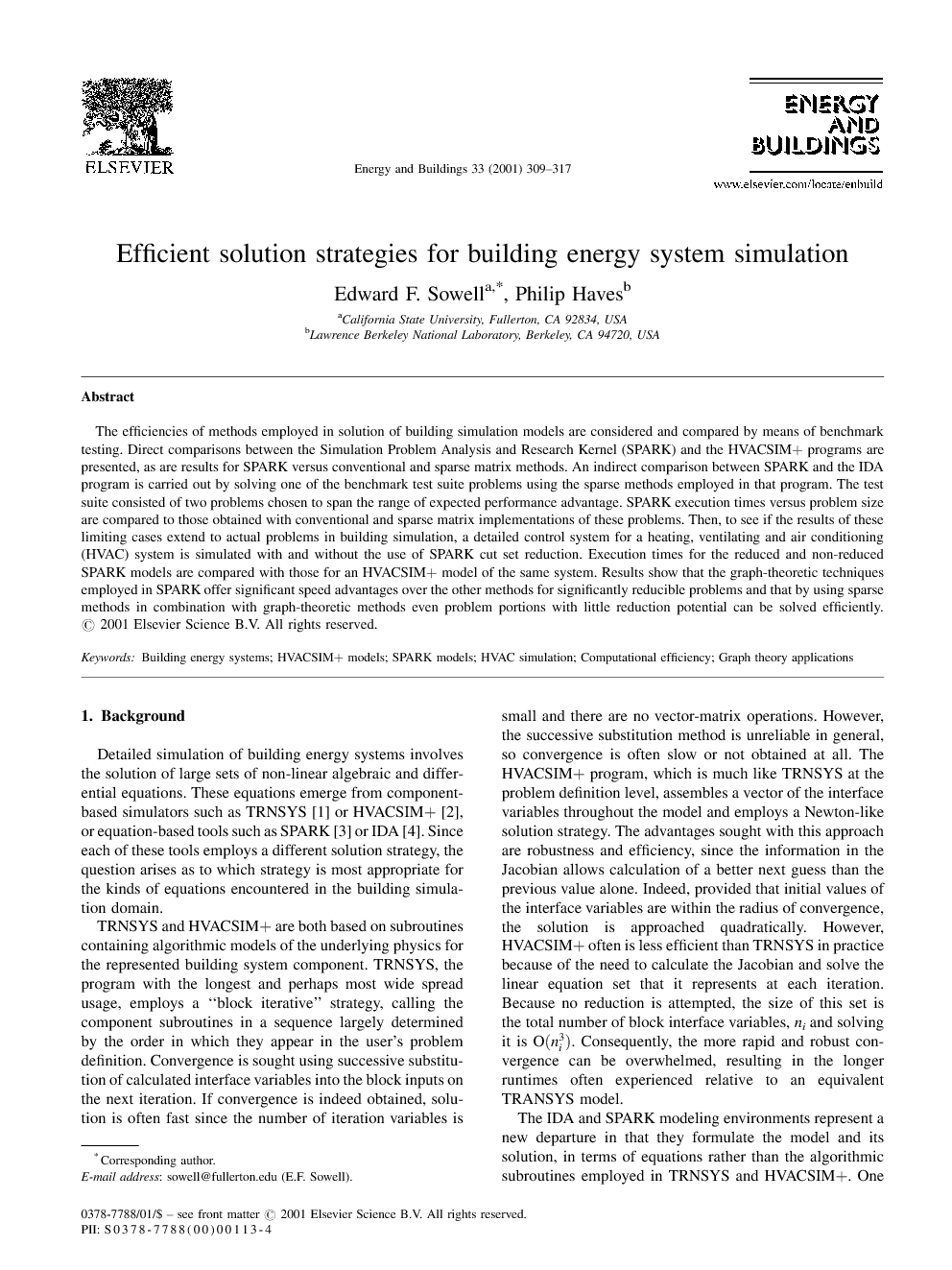 The efficiencies of methods employed in solution of building simulation models are considered and compared by means of benchmark testing. Direct comparisons between the Simulation Problem Analysis and Research Kernel (SPARK) and the HVACSIM+ programs are presented, as are results for SPARK versus conventional and sparse matrix methods. An indirect comparison between SPARK and the IDA program is carried out by solving one of the benchmark test suite problems using the sparse methods employed in that program. The test suite consisted of two problems chosen to span the range of expected performance advantage. SPARK execution times versus problem size are compared to those obtained with conventional and sparse matrix implementations of these problems. Then, to see if the results of these limiting cases extend to actual problems in building simulation, a detailed control system for a heating, ventilating and air conditioning (HVAC) system is simulated with and without the use of SPARK cut set reduction. Execution times for the reduced and non-reduced SPARK models are compared with those for an HVACSIM+ model of the same system. Results show that the graph-theoretic techniques employed in SPARK offer significant speed advantages over the other methods for significantly reducible problems and that by using sparse methods in combination with graph-theoretic methods even problem portions with little reduction potential can be solved efficiently.

The principle conclusion that can be drawn from this work is that SPARK outperforms conventional and sparse matrix methods for solution of problems that can be decomposed and/or reduced with graph-theoretical techniques. Roughly speaking, execution time savings will be O(mr3) where r is the ratio of the largest cut set size to the number of equations in the problem, and m is the number of strongly connected components into which the problem partitions. Typical HVAC air flow systems simulation models, including associated controls, are among the problems that benefit from the SPARK solution methodology. The reduction techniques produced close to the maximum reduction in the benchmark HVAC problem, and there are indications that similar reductions can be expected in the broad class of problems involving flow networks and their associated control systems. Reductions in execution time of more than an order of magnitude can be expected relative to full-matrix solvers, such as HVACSIM+. While direct benchmarks were not carried out for IDA, our indirect tests suggest that the sparse methods employed in that program will not be comparable to SPARK for problems in this class. On the other hand, problems characterized by a high degree of interconnectivity, such as energy, mass or momentum transport in homogenous media, allow limited reduction and, therefore, are not prima fascia candidates for SPARK solution methods. However, by proper coercion of matching and cut set selection, significant execution time reduction can still be achieved. Finally, since the reduced Jacobian in homogeneous transport problems is still very sparse, conventional sparse matrix methods can be beneficially applied after SPARK reduction. When this is done, SPARK can be competitive with sparse solvers for homogeneous transport problems, and probably superior for system simulations in which reducible and homogeneous transport components must both be solved.