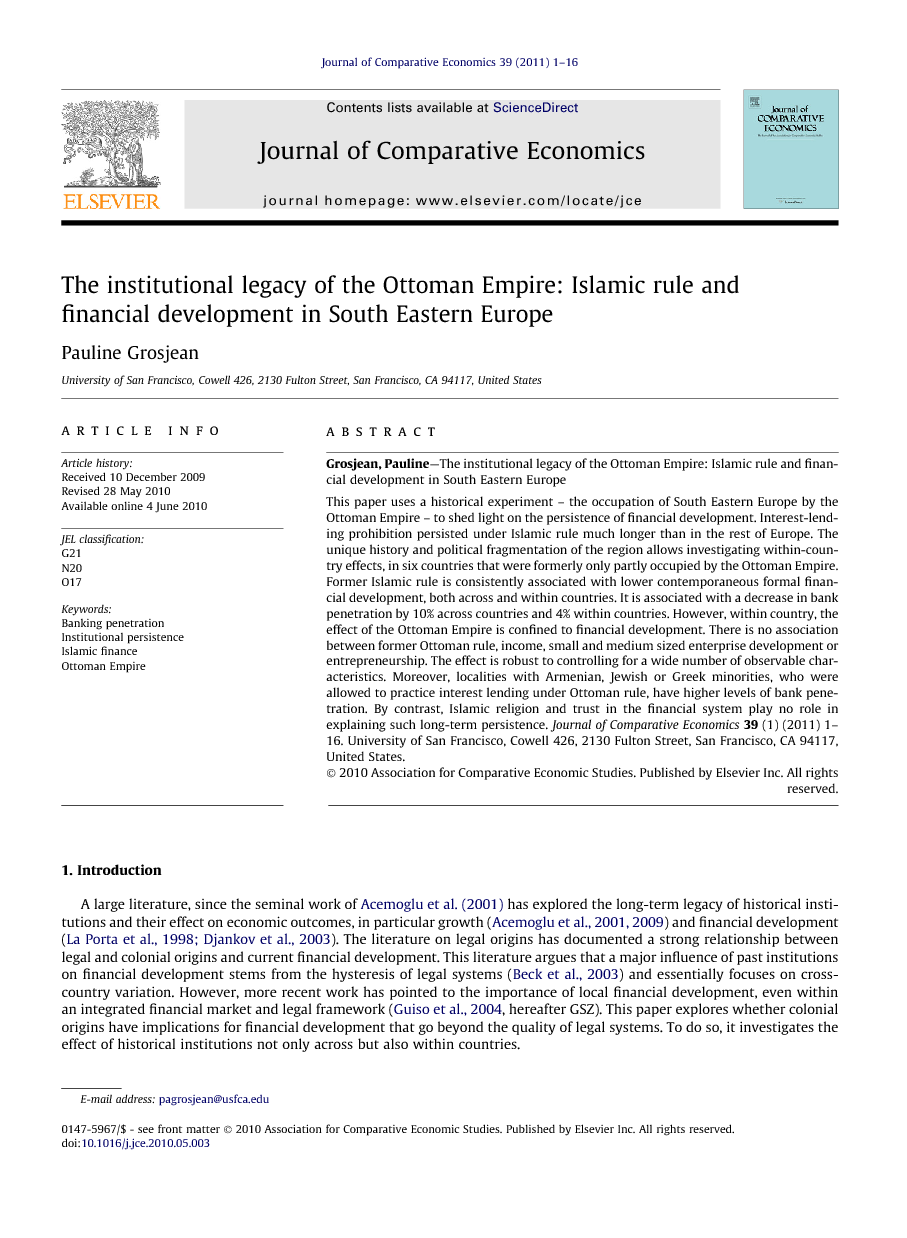 This paper uses a historical experiment – the occupation of South Eastern Europe by the Ottoman Empire – to shed light on the persistence of financial development. Interest-lending prohibition persisted under Islamic rule much longer than in the rest of Europe. The unique history and political fragmentation of the region allows investigating within-country effects, in six countries that were formerly only partly occupied by the Ottoman Empire. Former Islamic rule is consistently associated with lower contemporaneous formal financial development, both across and within countries. It is associated with a decrease in bank penetration by 10% across countries and 4% within countries. However, within country, the effect of the Ottoman Empire is confined to financial development. There is no association between former Ottoman rule, income, small and medium sized enterprise development or entrepreneurship. The effect is robust to controlling for a wide number of observable characteristics. Moreover, localities with Armenian, Jewish or Greek minorities, who were allowed to practice interest lending under Ottoman rule, have higher levels of bank penetration. By contrast, Islamic religion and trust in the financial system play no role in explaining such long-term persistence.

This paper uses a historical experiment: the Ottoman domination of South Eastern Europe – which generated variation in formal financial development within a given set of countries – to contribute to the literature on the importance of history for development and to the literature on finance and development. Interest-lending prohibition lasted in the Ottoman Empire much longer than in the rest of Europe. I find evidence of persistence of Ottoman rule on contemporaneous financial development. Part of the persistence of financial development is captured through country effects but even within-country, that is to say within a given institutional and legal framework, former Ottoman provinces still experience lower levels of banking penetration today. This is particularly notable, as countries in this region have experienced numerous political regime changes since the time period considered here. Interestingly, there is no evidence that such lower financial development is associated with negative effects on the development of the real economy. Although the former Ottoman Empire, as a whole, is poorer than the former Habsburg Empire or Prussia, the effect does not hold within country. Furthermore, even across countries, there are no differences in terms of small and medium sized enterprises development or entrepreneurship. However, the analysis in this paper cannot clearly identify the causal impact of financial development on real development in the region. This is the object of future research. The persistence of financial development in areas where Greek, Armenian and Jewish minorities were allowed to lend with interest and the absence of an effect of Islamic religion or beliefs testify of a causal long-term effect of Ottoman institutions on financial development. One hypothesized channel of transmission is that informal financial networks developed as an alternative to formal finance and persisted until today. Even though data availability does not permit directly testing for such a causality channel in this paper, historical accounts and anecdotal evidence in former Ottoman countries of the Balkans point to the importance of informal financing networks and the reliance of small businesses on informal sources of finance (Poutziouris et al., 1997 and Pamuk, 2000). The results have interesting implications concerning the economic impacts of Islamic law. I find no evidence that the persistence of lower levels of financial development in the former Ottoman region has anything to do with Islamic religion itself but rather with former formal – Islamic-institutions. The main strength of the paper is to use a historical experiment that generated variation in formal financial development within country and circumvents the simultaneity and aggregation biases that impede many studies of the role of formal vs. informal finance in development. The main caveat is probably the use of household expenditures or regional GDP as income measures. Such measures indeed reflect post-tax and post-transfers income or consumption levels and as such may be influenced by redistribution, which could explain why no Ottoman effect is observed when the within country variation is exploited. If richer regions redistribute to poorer regions, the level of household expenditures could be sufficiently equalized so that no significant regional differences are observed. One should rather rely on pre-tax and pre-transfers income levels, but this data is not available at the sub-national level in the region studied here.