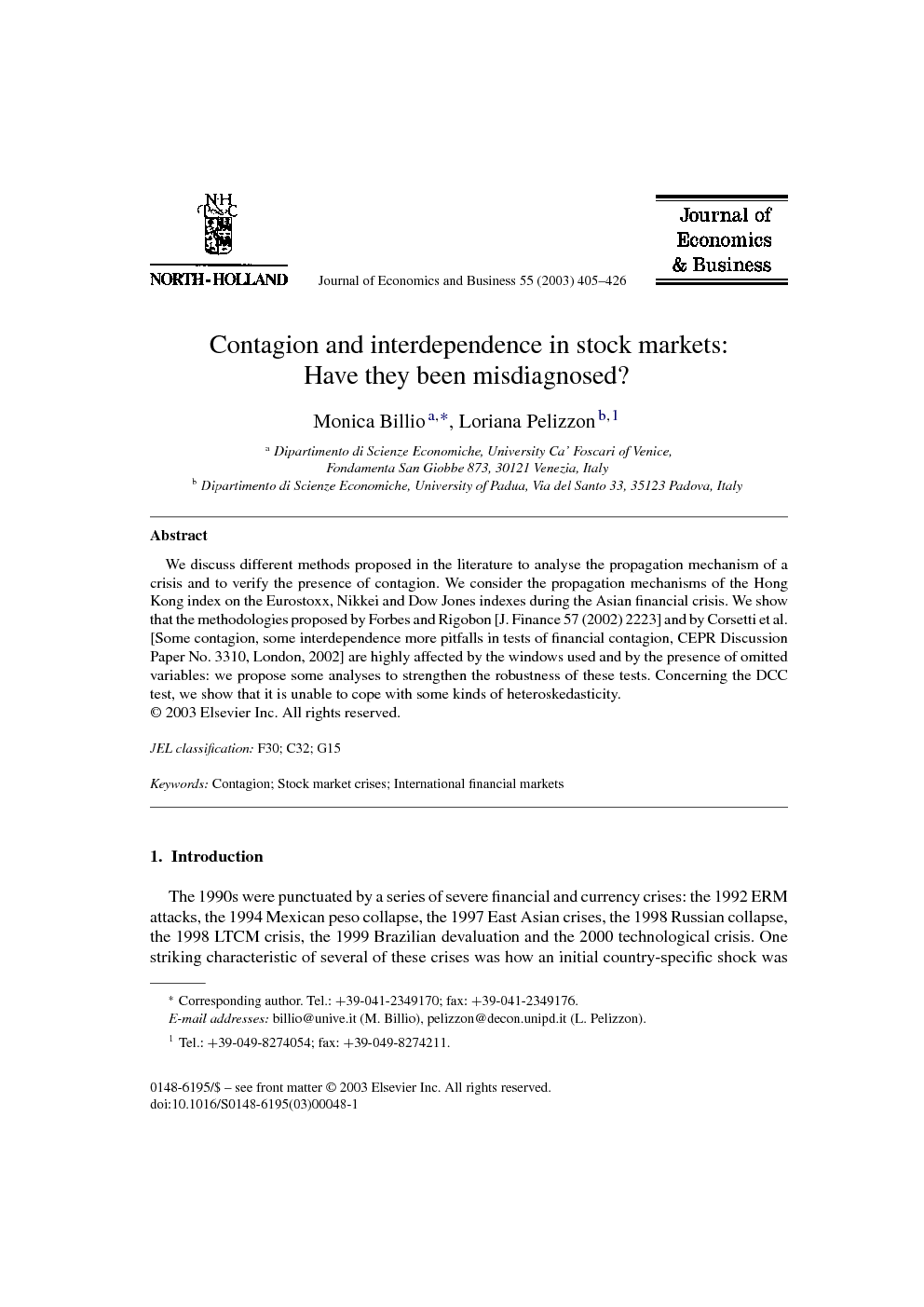 We discuss different methods proposed in the literature to analyse the propagation mechanism of a crisis and to verify the presence of contagion. We consider the propagation mechanisms of the Hong Kong index on the Eurostoxx, Nikkei and Dow Jones indexes during the Asian financial crisis. We show that the methodologies proposed by Forbes and Rigobon and by Corsetti et al. [Some contagion, some interdependence more pitfalls in tests of financial contagion, CEPR Discussion Paper No. 3310, London, 2002] are highly affected by the windows used and by the presence of omitted variables: we propose some analyses to strengthen the robustness of these tests. Concerning the DCC test, we show that it is unable to cope with some kinds of heteroskedasticity.

The 1990s were punctuated by a series of severe financial and currency crises: the 1992 ERM attacks, the 1994 Mexican peso collapse, the 1997 East Asian crises, the 1998 Russian collapse, the 1998 LTCM crisis, the 1999 Brazilian devaluation and the 2000 technological crisis. One striking characteristic of several of these crises was how an initial country-specific shock was rapidly transmitted to markets of very different sizes and structures around the globe. This has prompted a surge of interest in “contagion”. This is a relevant issue from the empirical and theoretical point of view. Volatility transmission and contagion are relevant at an international level by themselves and have important consequences for monetary policy, optimal asset allocation, risk measurement, capital adequacy and asset pricing. Many authors have written about the propagation mechanisms of these crises. In particular, they have focused on the question whether the relationships between markets during tranquil periods are different from those during periods of crisis. Often during financial crises we observe strong co-movements in prices and in the volatility between markets. We can also observe an increase in the covariance of the returns and sometimes in their correlation. In this paper, “contagion”—as opposed to “interdependence”—conveys the idea that international propagation mechanisms are discontinuous. There is no agreement on this definition and many other definitions have been proposed. If contagion is a structural break in the data-generating process during crisis periods, we can use tests to check the stability of parameters to find it. Unfortunately, the data often exhibit heteroskedasticity and problems of endogenous variables and omitted variable. There is no agreement on how to treat them when the three difficulties are simultaneously present. A variety of analyses use different assumptions to solve those problems and reach different conclusions on contagion. In this paper we discuss two types of test that have been proposed in the literature to analyse the propagation mechanism of a crisis and to verify the presence of any discontinuity. The first typology of tests evaluates the correlation coefficients among markets returns (correlation analysis). In particular, we consider the test introduced by Forbes and Rigobon (2002) (henceforth F–R, see also Forbes & Rigobon, 2001a and Forbes & Rigobon, 2001b), which takes into consideration the bias due to the changing volatility (i.e., heteroskedasticity), and the test proposed by Corsetti, Pericoli, and Sbracia (2002) (henceforth C–P–S), which also deals with the endogeneity problem. The second approach, proposed by Rigobon (2002a), considers the whole variance-covariance matrix of market returns and allows for the presence of heterosckedasticity, simultaneous equations and omitted variables. Ronn, Sayrak, and Tompaidis (2001), Boyer, Gibson, and Loretan (1999) and Loretan and English (2000) have recently addressed how changes in volatility can bias correlation coefficients. In particular, Ronn et al. (2001) use a restrictive assumption on the distribution of residuals in his proof of the bias and does not consider how this bias affects correlations. Boyer et al. (1999) and Loretan and English (2000) propose an adjustment that, after some algebraic manipulation, is the same as the correction proposed in F–R. For this reason we concentrate only on the three tests previously mentioned. This paper focuses on the robustness of these tests. In particular, we show that F–R and C–P–S tests are often biased because, in most of the cases (even in those empirically analysed by the previous authors), we actually do observe the presence of omitted variables. We propose a simple analysis to verify this. Concerning the DCC test we show that, even if the test is not biased in the presence of simultaneous equations and omitted variables, a rejection can be due both to a shift in the parameters or to the diffusion of the heteroskedasticity. In order to perform this analysis, we consider the stability of the propagation mechanisms of the Hong Kong stock market on Eurostoxx, Nikkei and Dow Jones indexes during the Asian financial crisis. Moreover, we show that all the tests are highly affected by the choice of the window and we propose a window sensitivity analysis to avoid misdiagnosis of contagion. Furthermore, we show that such tests are also highly affected by the time zone, which could also induce the tests to misdiagnose contagion. Finally, concerning the first approach, we show that the C–P–S test finds more episodes of contagion than the F–R test because of its set-up. This difference comes from the hypothesis that the two tests use on the theoretical correlation coefficient. In particular, the C–P–S test takes into account that the F–R test is biased under certain conditions and as a consequence, we should prefer this test to the F–R test. However, a proper estimation procedure of the theoretical parameters, which characterise the C–P–S test, has not yet been fixed. The DCC finds many rejections, which, as we will see, can be generated by either: parameter instability, the form of heteroskedasticity or both. We are therefore unable to evaluate whether the parameters have changed and thus whether there is contagion. The outline of the paper is as follows. We start by presenting the literature in Section 2. In Section 3 we introduce the tests on correlation coefficients and the DCC test. In Section 4 we describe the results of the empirical investigation. Section 5 concludes.

In this paper we analyse three different methods proposed in the literature to verify the null hypothesis of interdependence against contagion between financial markets. Following many authors we define contagion as an increase in the cross-market linkages during a financial crisis. We sustain that it is useful to take into account the hypothesis of a fall of correlation during crises. We show that the inference based on conditional correlation coefficient, even if adjusted for heteroskedasticity (F–R and C–P–S methods), can be misleading and depends highly on the window used. We demonstrate that these tests are biased because in most of the cases we observe the presence of omitted variables. To demonstrate this, we have proposed a simple analysis of volatility. We have also used a rolling windows analysis to shed light on the robustness of the windows used. We then have run the DCC test and observed that even if it operates in the presence of omitted and endogenous variables, it is unable to cope with some types of heteroskedasticity that could be exhibited by the data. It is thus impossible to state whether the rejections found are due to shifts in the parameters (contagion) or to the type of heteroskedasticity. We also empirically show that the DCC test has little power in the multivariate setting. However, our work is only a preliminary analysis of the contagion test. Future work is needed to find an approach that appropriately measure contagion between financial markets.