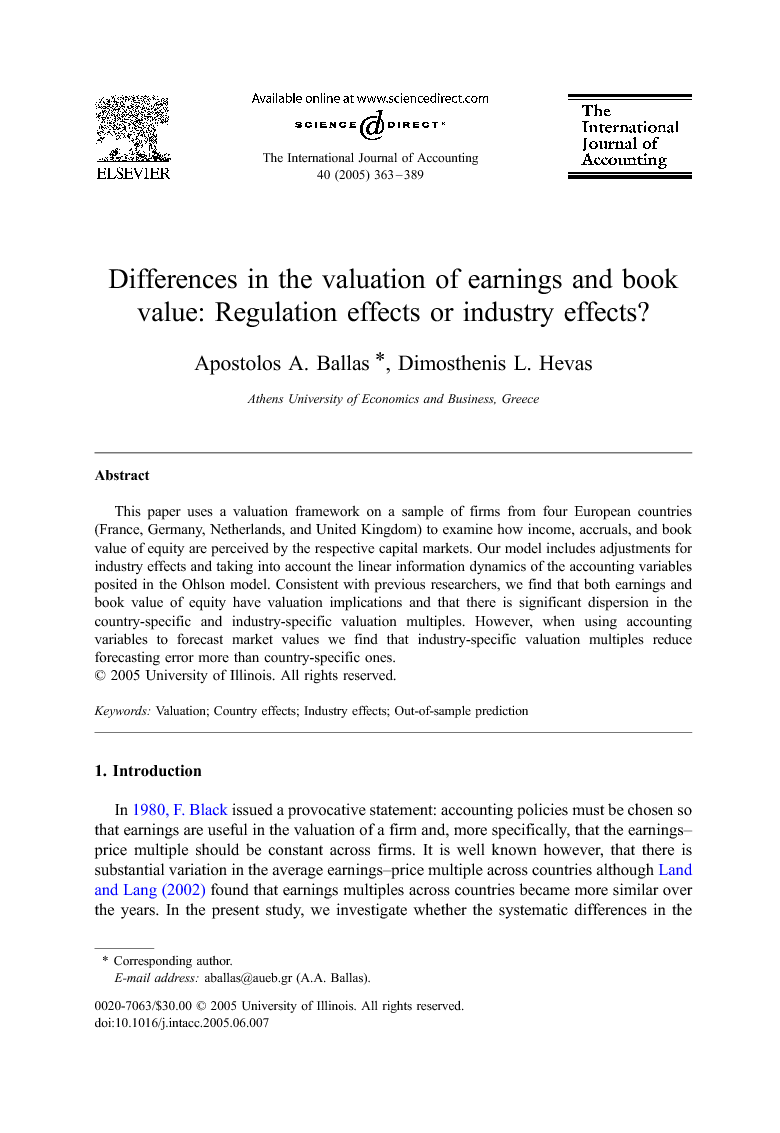 This paper uses a valuation framework on a sample of firms from four European countries (France, Germany, Netherlands, and United Kingdom) to examine how income, accruals, and book value of equity are perceived by the respective capital markets. Our model includes adjustments for industry effects and taking into account the linear information dynamics of the accounting variables posited in the Ohlson model. Consistent with previous researchers, we find that both earnings and book value of equity have valuation implications and that there is significant dispersion in the country-specific and industry-specific valuation multiples. However, when using accounting variables to forecast market values we find that industry-specific valuation multiples reduce forecasting error more than country-specific ones.

This study extends previous work on cross-national differences in the valuation of earnings and book value of equity. Using a sample of companies from four European countries, we jointly estimate Ohlson’s valuation equation with linear information dynamics equations and we evaluate the influence of industry sectors in the forecasting performance of the model. We estimate two linear information valuation models (LIM) employing two levels of earnings disaggregation. The first LIM is based on aggregate residual earnings while the second includes total accruals as a separate variable. We initially estimated pooled versions of both LIMs and found earnings and book value of equity to be significant explanatory variables of the cross-sectional variation in market values while accruals in the second is not. Our first set of testable hypotheses was about cross-sectional variation in the valuation multiples of earnings and book value of equity in the two LIMs and accruals in LIM2 when these are estimated by country and by industry. Our findings were that earnings and book value are significant and with the expected sign in almost all country and industry contexts in both LIMs. Earnings valuation multiples differ significantly across both countries and industries while the valuation multiples on book value of equity vary significantly only when the models are estimated by industry. Accruals which is used as a separate variable in LIM2 is a significant variable only in a limited number of country and industry contexts but, nevertheless, there are statistically significant differences in the valuation multiples across both countries and industries. To test whether basing predictions on separate country and industry estimations of valuation model parameters affects equity market value predictions, we compare prediction errors from pooled and separate country and industry estimations for each LIM. Our results indicate that when estimating each LIM separately by industry, prediction errors are substantially smaller than when estimating a pooled model or when estimating the models by country. Finally, our results support disaggregation of earnings into accruals and cash flows if the LIM equity valuation models are estimated by country but not in the case of sector-specific estimation and prediction. In the latter case, prediction errors are larger on average than if we did not include accruals. Overall, our results indicate that there is convergence in financial-reporting practices within sectors. The size of the errors, however, suggests the need for consistency, which implies that there is a need for more sector-specific standards.