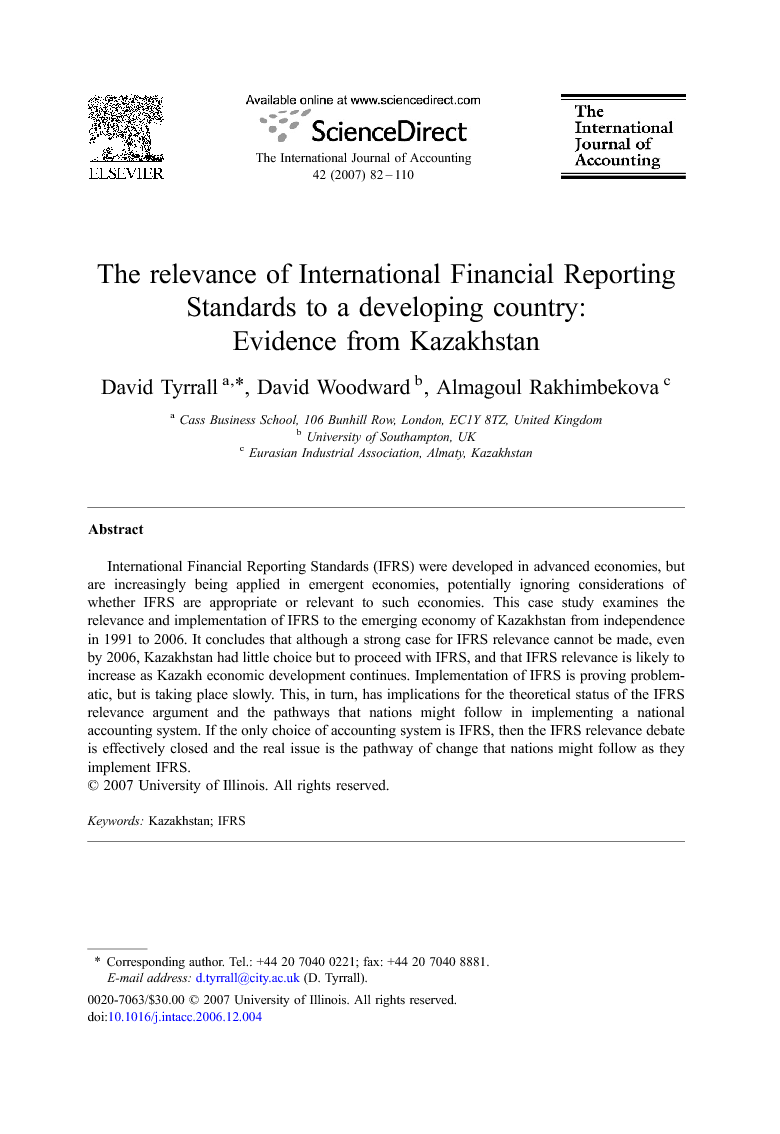 International Financial Reporting Standards (IFRS) were developed in advanced economies, but are increasingly being applied in emergent economies, potentially ignoring considerations of whether IFRS are appropriate or relevant to such economies. This case study examines the relevance and implementation of IFRS to the emerging economy of Kazakhstan from independence in 1991 to 2006. It concludes that although a strong case for IFRS relevance cannot be made, even by 2006, Kazakhstan had little choice but to proceed with IFRS, and that IFRS relevance is likely to increase as Kazakh economic development continues. Implementation of IFRS is proving problematic, but is taking place slowly. This, in turn, has implications for the theoretical status of the IFRS relevance argument and the pathways that nations might follow in implementing a national accounting system. If the only choice of accounting system is IFRS, then the IFRS relevance debate is effectively closed and the real issue is the pathway of change that nations might follow as they implement IFRS.

The tendency for countries to adopt IFRS1 has been accelerating in recent years (Deloitte, 2004 and Shneidman, 2003). The benefits of this standardizing trend seem widely accepted among practitioners (PwC, 2000; Tweedie, Chairman of the IASB, as quoted in Tricks & Hargreaves, 2004), governments (Bolkestein, European Commissioner, as quoted in Walton, 2004, Commission of the European Communities, 2001, United Nations Secretary General, 1993 and USAID, 2004), and academics (Jaruga, 1993 and Thorell and Whittington, 1994), including Kazakh sources (Serebrennikova, 2004). However, there are both advantages and disadvantages to harmonization (Thorell & Whittington, 1994) and these may affect developed and developing countries differently. The International Accounting Standards Committee Foundation has recognized the “need to have an understanding of the impact of IFRS as they are adopted in particular regions” (IASB, 2004, para. 93) as a result of the criticism that the IASB tends to display an “ivory tower” mentality (Parker, 2004), hence paying insufficient regard to the practical impacts of its standards. The present case study evaluates these very issues in relation to the transition from Soviet accounting methods to IFRS in Kazakhstan. Accounting reform in former USSR countries has been extensively investigated, particularly among the more westerly of the ex-Soviet nations (Bailey, 1995, Bailey, 1998, Daniel et al., 2001, Jaruga, 1993, Jaruga and Szychta, 1997, Seal et al., 1995, Solodchenko and Sucher, 2005 and Young, 1999. See Nobes & Parker, 2006, 228ff for overview), perhaps because their geographic proximity to Western Europe and historical backgrounds meant that accounting reforms came more rapidly to these countries. Hence a case study of accounting development in Kazakhstan may form a useful addition to the literature, especially since it is likely that Kazakhstan will have “a critical role to play in global energy security” (U.S. Energy Secretary Samuel Bodman quoted in Kazakhstan Embassy, 2006a), given her vast natural resources of hydrocarbons which are projected to supply 2–3% of the world's demand for oil within the next decade (Kazakhstan Embassy, 2006b). The case study proceeds as follows: Section 2 reviews the advantages and disadvantages of IFRS adoption by developing countries. It explicates a four-factor framework for assessing the relevance of IFRS to a particular country, and presents a categorization of pathways that governments may take in selecting and implementing a national accounting system.2 The methodology and data sources are presented in Section 3. Section 4 applies the four-factor framework to assess the potential relevance of IFRS to Kazakhstan. Section 5 assesses the progress and problems on the pathway to IFRS implementation. Section 6 discusses the limitations and conclusions in relation to both Kazakhstan and the theoretical framework.