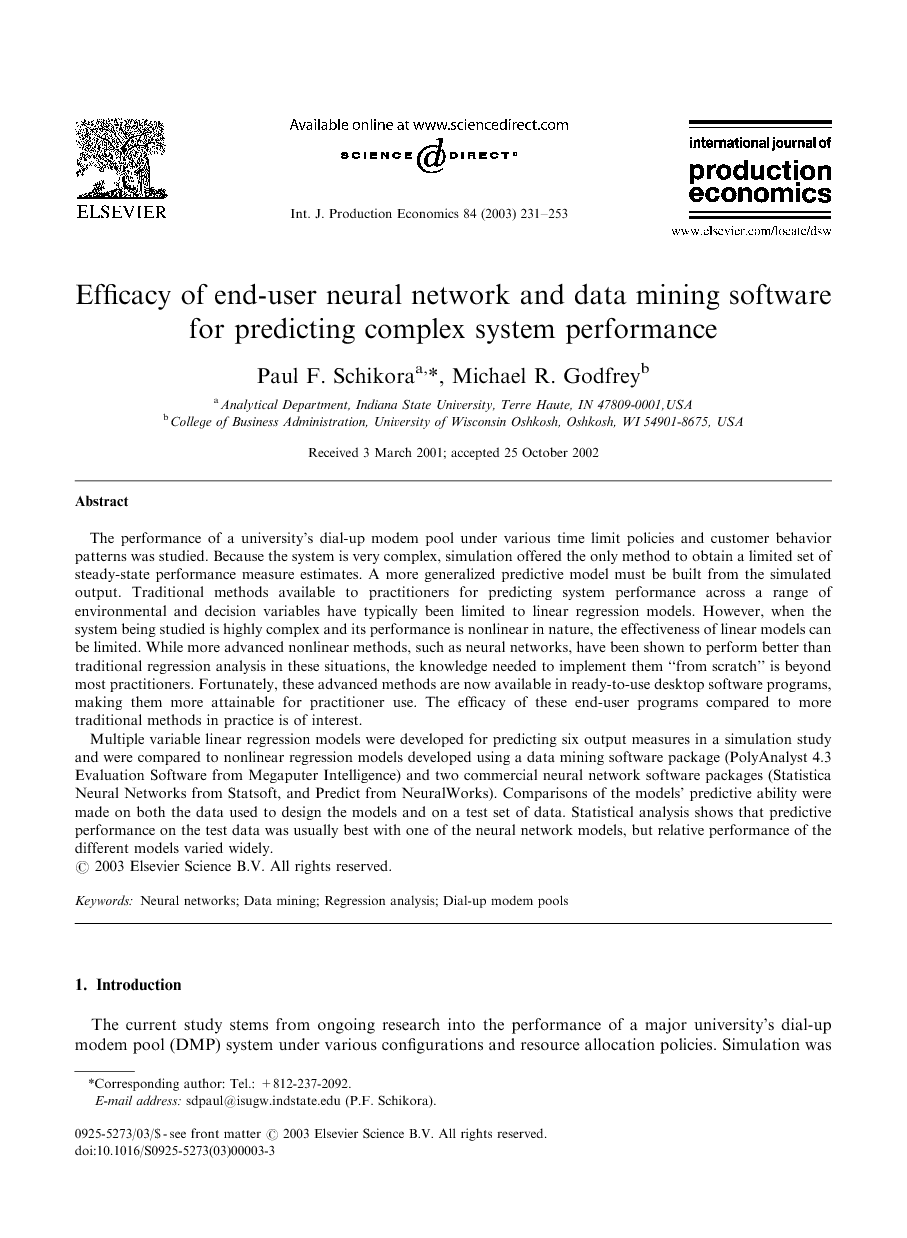 The performance of a university's dial-up modem pool under various time limit policies and customer behavior patterns was studied. Because the system is very complex, simulation offered the only method to obtain a limited set of steady-state performance measure estimates. A more generalized predictive model must be built from the simulated output. Traditional methods available to practitioners for predicting system performance across a range of environmental and decision variables have typically been limited to linear regression models. However, when the system being studied is highly complex and its performance is nonlinear in nature, the effectiveness of linear models can be limited. While more advanced nonlinear methods, such as neural networks, have been shown to perform better than traditional regression analysis in these situations, the knowledge needed to implement them “from scratch” is beyond most practitioners. Fortunately, these advanced methods are now available in ready-to-use desktop software programs, making them more attainable for practitioner use. The efficacy of these end-user programs compared to more traditional methods in practice is of interest. Multiple variable linear regression models were developed for predicting six output measures in a simulation study and were compared to nonlinear regression models developed using a data mining software package (PolyAnalyst 4.3 Evaluation Software from Megaputer Intelligence) and two commercial neural network software packages (Statistica Neural Networks from Statsoft, and Predict from NeuralWorks). Comparisons of the models’ predictive ability were made on both the data used to design the models and on a test set of data. Statistical analysis shows that predictive performance on the test data was usually best with one of the neural network models, but relative performance of the different models varied widely.

5. Conclusions and implications for future research The results of this study indicate the potential benefit to practitioners from considering commercially available neural network and other nonlinear modeling desktop software packages when trying to develop a predictive model for a complex system. With very little work and mathematical knowledge on the part of the modeler, these programs can be used to develop some very good predictive models. However, the software packages tested here appear to provide inconsistent results, at least when left with the default or recommended program settings, as in this study. One of the most attractive features of the software packages used here is that they require virtually no understanding of the underlying theory to implement, contrary to the use of multiple linear regression models, which requires at least the understanding of how and when to transform data to better fit with a linear model. The downside of this is that the user gains no insight into the behavior of the system itself. The software packages basically do all of the work in building, testing, and selecting a good model. Even with the model created and ready for implementation, the average user will not gain any insight into the modeled system's behavior. (We use the term “average user” to differentiate most practitioners from those well versed in neural network theory, who would be able to use the more advanced features of both packages.) As a result, there is a risk of trading potentially better predictive capabilities for lesser understanding of basic system operation. Unlike the neural network models, PolyAnalyst does provide its model in explicit symbolic form, but as discussed earlier, the usefulness of these rules in understanding underlying system behavior is questionable. Despite the temptation to let the software “do it all,” users of these software packages are encouraged to learn how the specific package works and how the software can be customized. The default settings of the neural network software package used in this study are designed to produce “good” models, but obviously not the absolute best model. By changing different settings on the network generation routines of each package, many different good models could, and should, be generated and compared. Our experience leads us to advise paying special attention to the variable selection process in the software package; which if available, should be used cautiously. From our experience, this feature of Predict is very sensitive to how the initial training data set is partitioned by Predict into training and validation subsets. It has a feature to randomly “shuffle” the cases between the two subsets. In several tests on different data sets, the variable selection tool selected different variables for inclusion in the network based solely on reshuffling the data cases. This sensitivity to user settings creates a bit of a paradox for practitioners. The programs are initially attractive due to their ease of use and the lack of any need for understanding of the underlying mathematical concepts. However, to gain full benefit from the packages, the user will need to adjust multiple settings, many of which do require better understanding of the underlying modeling technique. We feel it only fair to point out that the results of our study are in effect a snapshot in time. As the reader is certainly aware, commercial software packages routinely undergo revisions and upgrades. It is our experience that software packages like those we studied here do not change as frequently as common office application software, but they do change. Future revisions of the software may introduce new features and perhaps better performance when used with default settings. Future research may extend the comparison in this study to examine how well these packages perform when used by modelers with extensive experience and knowledge in the use of neural networks and other advanced modeling techniques. Also, the varied results from the different approaches used here leads one to ask how an average practitioner might improve predictive results overall. One way might be to combine the output from several different models—perhaps in some sort of weighted average prediction and then compare the performance of the combined model to that of the individual models.