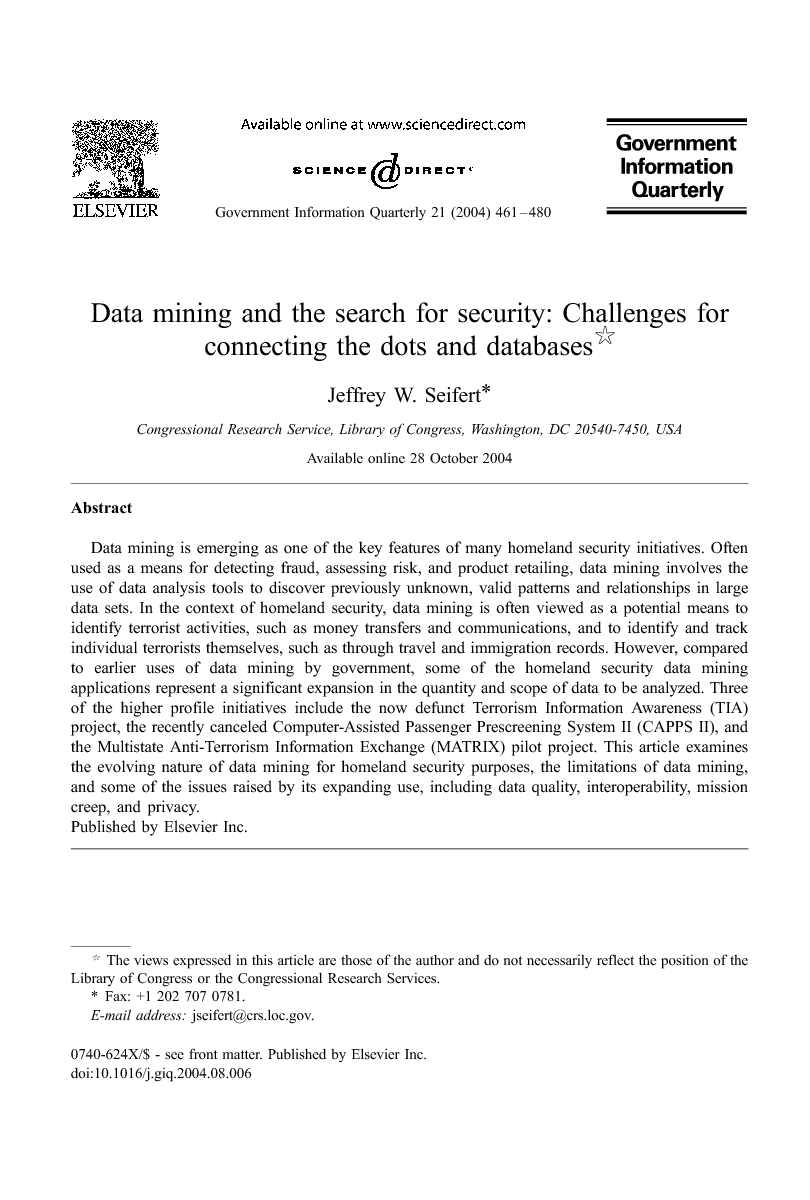 Data mining is emerging as one of the key features of many homeland security initiatives. Often used as a means for detecting fraud, assessing risk, and product retailing, data mining involves the use of data analysis tools to discover previously unknown, valid patterns and relationships in large data sets. In the context of homeland security, data mining is often viewed as a potential means to identify terrorist activities, such as money transfers and communications, and to identify and track individual terrorists themselves, such as through travel and immigration records. However, compared to earlier uses of data mining by government, some of the homeland security data mining applications represent a significant expansion in the quantity and scope of data to be analyzed. Three of the higher profile initiatives include the now defunct Terrorism Information Awareness (TIA) project, the recently canceled Computer-Assisted Passenger Prescreening System II (CAPPS II), and the Multistate Anti-Terrorism Information Exchange (MATRIX) pilot project. This article examines the evolving nature of data mining for homeland security purposes, the limitations of data mining, and some of the issues raised by its expanding use, including data quality, interoperability, mission creep, and privacy.

6. Conclusion While the policy community remains divided on the merits of specific data mining initiatives, there appear to be some signs of acceptance of the growing use of data mining for homeland security purposes, provided that appropriate protections are in place and enforced. However, since the security sensitivities of such projects may obscure them from public scrutiny, government oversight of these initiatives will need to be persistent and thorough. Indeed, at the time of this writing, as more time passes since the September 11, 2001, attacks, there appears to be growing support to ensure that safeguards are built into the policies and technologies used in data mining and a willingness to pull the plug on projects that are perceived (rightly or not) to be without restraint. However, if in the unfortunate case there is another high-impact terrorist attack in the United States, security concerns could easily overwhelm the will to scrutinize our actions voluntarily, suggesting that built-in protections and oversight will be critical to data mining initiatives that the citizenry can trust. As discussed above, while technological capabilities are important, there are other implementation and oversight issues that can influence the success of a data mining project's outcome. The challenges of data quality, interoperability, mission creep, and privacy can all serve to undermine or misdirect data mining initiatives. Equally important to an initiative's success or failure is the cultivation of public awareness and support. The sereptious development of a data mining application aimed at the general population breeds mistrust and is more likely to generate a vociferous backlash than an initiative that involves potential stakeholders. However, that is not to say that there should be complete transparency either. While transparency is a critical feature of democracy, there are legitimate security reasons for not disclosing all of the technical and analytical aspects of a homeland security data mining application. A balance must be struck between enabling openness and oversight and adherence to the appropriate security protocols. The discussion of data mining presented here provides merely a snapshot in time. As technology evolves, additional information becomes more accessible, and homeland security demands continue to develop, it is likely that there will be a growth in government use data mining. Moreover, as the MATRIX initiative suggests, data mining will not be the sole province of the federal government. State and local governments, both individually and collaboratively, are likely to push ahead with data mining initiatives of their own in a much more diverse regulatory environment. Looking ahead, then, as more pools of data are collected, combined, and analyzed, one can anticipate that the potential privacy, accuracy, and security concerns will multiply. The larger question, though, is whether the results of this data mining will represent a strategic allocation of resources or a quixotic search for security?