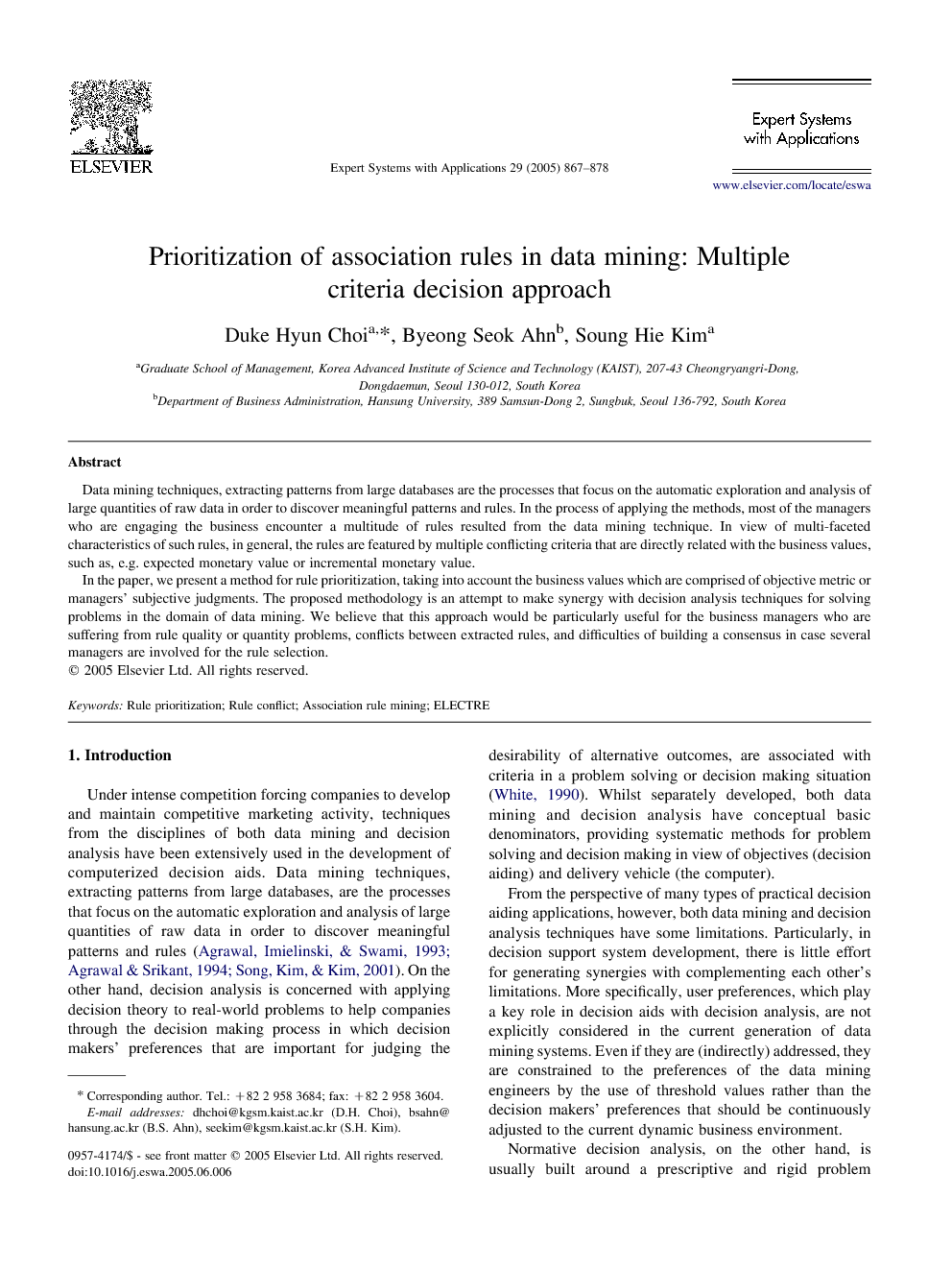 Data mining techniques, extracting patterns from large databases are the processes that focus on the automatic exploration and analysis of large quantities of raw data in order to discover meaningful patterns and rules. In the process of applying the methods, most of the managers who are engaging the business encounter a multitude of rules resulted from the data mining technique. In view of multi-faceted characteristics of such rules, in general, the rules are featured by multiple conflicting criteria that are directly related with the business values, such as, e.g. expected monetary value or incremental monetary value. In the paper, we present a method for rule prioritization, taking into account the business values which are comprised of objective metric or managers’ subjective judgments. The proposed methodology is an attempt to make synergy with decision analysis techniques for solving problems in the domain of data mining. We believe that this approach would be particularly useful for the business managers who are suffering from rule quality or quantity problems, conflicts between extracted rules, and difficulties of building a consensus in case several managers are involved for the rule selection.

Under intense competition forcing companies to develop and maintain competitive marketing activity, techniques from the disciplines of both data mining and decision analysis have been extensively used in the development of computerized decision aids. Data mining techniques, extracting patterns from large databases, are the processes that focus on the automatic exploration and analysis of large quantities of raw data in order to discover meaningful patterns and rules (Agrawal et al., 1993, Agrawal and Srikant, 1994 and Song et al., 2001). On the other hand, decision analysis is concerned with applying decision theory to real-world problems to help companies through the decision making process in which decision makers’ preferences that are important for judging the desirability of alternative outcomes, are associated with criteria in a problem solving or decision making situation (White, 1990). Whilst separately developed, both data mining and decision analysis have conceptual basic denominators, providing systematic methods for problem solving and decision making in view of objectives (decision aiding) and delivery vehicle (the computer). From the perspective of many types of practical decision aiding applications, however, both data mining and decision analysis techniques have some limitations. Particularly, in decision support system development, there is little effort for generating synergies with complementing each other's limitations. More specifically, user preferences, which play a key role in decision aids with decision analysis, are not explicitly considered in the current generation of data mining systems. Even if they are (indirectly) addressed, they are constrained to the preferences of the data mining engineers by the use of threshold values rather than the decision makers’ preferences that should be continuously adjusted to the current dynamic business environment. Normative decision analysis, on the other hand, is usually built around a prescriptive and rigid problem structure called a decision analysis model. Decision analysis is not compatible with extracting knowledge from large corporate databases of nowadays, since it does not focus on the automotive generation of meaningful knowledge from raw data. It can be, thus, meaningful to complement the techniques from data mining with those from decision analysis: data mining for alternatives (i.e. rules) generation from large database and decision analysis for prioritizing those alternatives by reflecting decision makers’ preferences. In existing data mining techniques, there exist some situations that make necessary the prioritization of rules for selecting and concentrating on more valuable rules due to the number of qualified rules (Tan & Kumar, 2000) and limited business resources. Even though the purpose of data mining is rule (pattern) extraction that is valuable for decision making, patterns are deemed ‘interesting’ just on the basis of passing certain statistical tests such as support/confidence in data mining. To the enterprise, however, it remains unclear how such patterns can be used to maximize business objectives. The major obstacle lies in the gap between statistic-based summaries (the statistic-based pattern extraction) extracted by traditional rule mining and a profit-driven action (the value-based decision making) required by business decision making ( Wang, Zhou, & Han, 2002) which is characterized by explicit consideration of conflicts of business objectives ( Barr and Feigenbaum, 1981 and Hayes-Roth et al., 1983) and by multiple decision makers’ involvement for corporate decision making. In summary, the research objective is to prioritize association rules resulted from the data mining, taking into account their business values by explicitly incorporating the conflicting criteria of business values and by the managers’ preference statements toward their trade-off conditions. For this purpose, a decision analysis method, e.g. the Analytic Hierarchy Process (AHP) is applied to aggregate the opinions of the group decision makers on what are the relevant criteria for evaluating business values of rules and relative importance of those criteria. Association rule mining, one of the data mining techniques, is then performed to capture a set of competing rules with their various business values and those are, in turn, used as input for the rule prioritization. Thus, the final rule selected from the appropriate decision method, e.g. ELECTRE reveals meaningful result obtained from the use of machine learning and human intelligence.

The business values that the firms could obtain is the most important consideration to firms in the process of extracting rules from large database on which decision makers relied. Each of rules has various attributes related with the business values and those attributes have different importance according to the business strategy of the firms. Our work presents a novel rule prioritization methodology that incorporate decision makers’ preferences in evaluating the promising association rules obtained from data mining. The proposed methodology is an attempt to make synergy with decision analysis techniques for solving problems in the domain of data mining. We believe that this approach would be particularly useful for the business managers who are suffering from rule quality or quantity problems, conflicts between extracted rules, and difficulties in building a group-consensus for the rule selection. As a further research area, we plan to extend our methodology to the adaptation process. With a feedback-loop that allows decision makers’ agreement and disagreement for some parts of ranks, it is expected to obtain more refined rule prioritization.