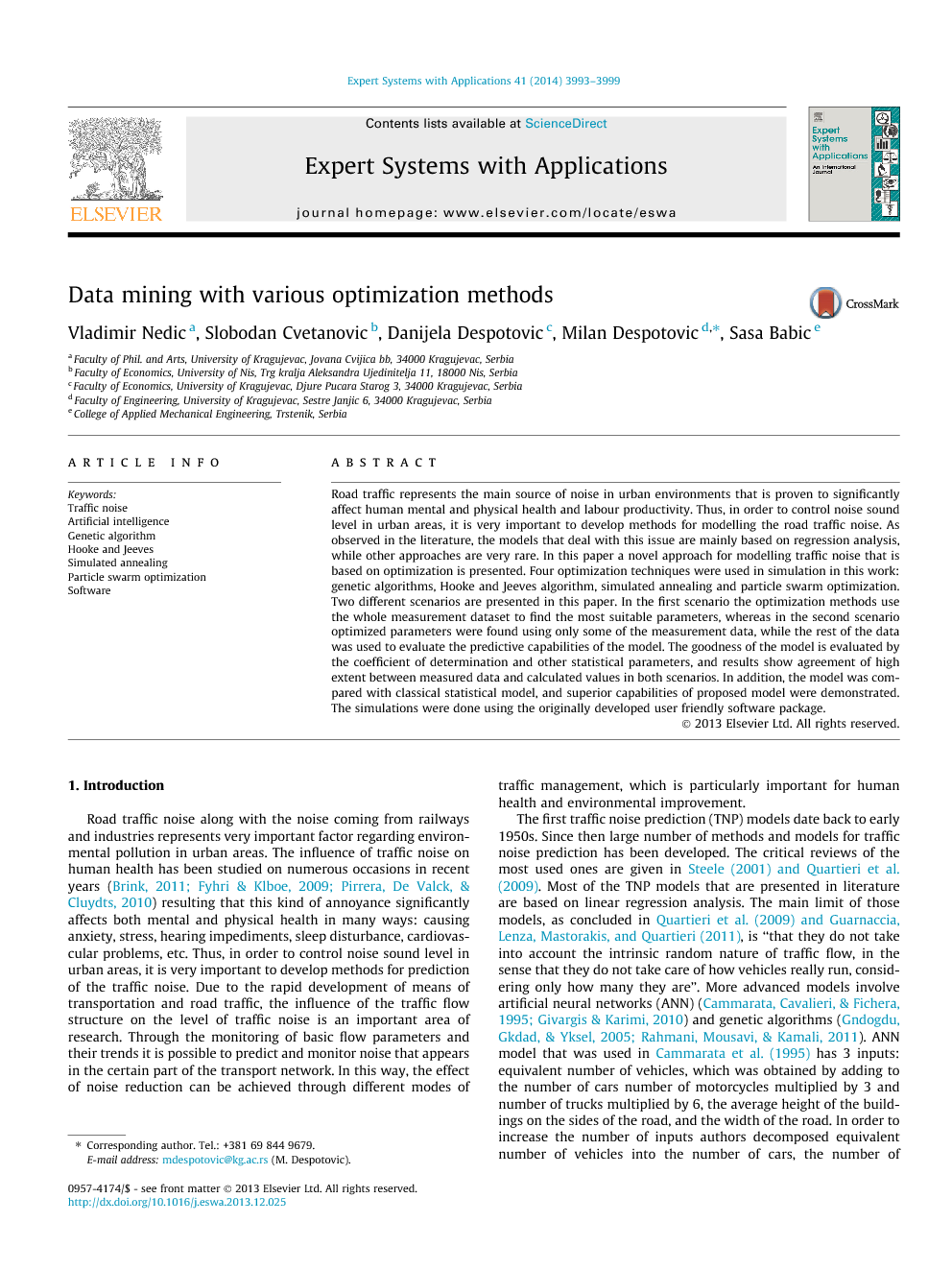 Road traffic represents the main source of noise in urban environments that is proven to significantly affect human mental and physical health and labour productivity. Thus, in order to control noise sound level in urban areas, it is very important to develop methods for modelling the road traffic noise. As observed in the literature, the models that deal with this issue are mainly based on regression analysis, while other approaches are very rare. In this paper a novel approach for modelling traffic noise that is based on optimization is presented. Four optimization techniques were used in simulation in this work: genetic algorithms, Hooke and Jeeves algorithm, simulated annealing and particle swarm optimization. Two different scenarios are presented in this paper. In the first scenario the optimization methods use the whole measurement dataset to find the most suitable parameters, whereas in the second scenario optimized parameters were found using only some of the measurement data, while the rest of the data was used to evaluate the predictive capabilities of the model. The goodness of the model is evaluated by the coefficient of determination and other statistical parameters, and results show agreement of high extent between measured data and calculated values in both scenarios. In addition, the model was compared with classical statistical model, and superior capabilities of proposed model were demonstrated. The simulations were done using the originally developed user friendly software package.

Road traffic noise along with the noise coming from railways and industries represents very important factor regarding environmental pollution in urban areas. The influence of traffic noise on human health has been studied on numerous occasions in recent years (Brink, 2011, Fyhri and Klboe, 2009 and Pirrera et al., 2010) resulting that this kind of annoyance significantly affects both mental and physical health in many ways: causing anxiety, stress, hearing impediments, sleep disturbance, cardiovascular problems, etc. Thus, in order to control noise sound level in urban areas, it is very important to develop methods for prediction of the traffic noise. Due to the rapid development of means of transportation and road traffic, the influence of the traffic flow structure on the level of traffic noise is an important area of research. Through the monitoring of basic flow parameters and their trends it is possible to predict and monitor noise that appears in the certain part of the transport network. In this way, the effect of noise reduction can be achieved through different modes of traffic management, which is particularly important for human health and environmental improvement. The first traffic noise prediction (TNP) models date back to early 1950s. Since then large number of methods and models for traffic noise prediction has been developed. The critical reviews of the most used ones are given in Steele, 2001 and Quartieri et al., 2009. Most of the TNP models that are presented in literature are based on linear regression analysis. The main limit of those models, as concluded in Quartieri et al., 2009 and Guarnaccia et al., 2011, is “that they do not take into account the intrinsic random nature of traffic flow, in the sense that they do not take care of how vehicles really run, considering only how many they are”. More advanced models involve artificial neural networks (ANN) (Cammarata et al., 1995 and Givargis and Karimi, 2010) and genetic algorithms (Gndogdu et al., 2005 and Rahmani et al., 2011). ANN model that was used in Cammarata et al. (1995) has 3 inputs: equivalent number of vehicles, which was obtained by adding to the number of cars number of motorcycles multiplied by 3 and number of trucks multiplied by 6, the average height of the buildings on the sides of the road, and the width of the road. In order to increase the number of inputs authors decomposed equivalent number of vehicles into the number of cars, the number of motorcycles, and the number of trucks, and got the ANN model with 5 inputs. In terms of the parameters involved in the CoRTN (Calculation of Road Traffic Noise) model (Quartieri et al., 2009), which was initially developed in 1975 by the Transport and Road Research Laboratory and the Department of Transport of the United Kingdom, the ANN model that was used in Givargis and Karimi (2010) has 5 input variables: the total hourly traffic flow, the percentage of heavy vehicles, the hourly mean traffic speed, the gradient of the road, and the angle of view. Authors tested the developed model on the data collected on Tehran’s roads, and found no significant differences between the outputs of the developed ANN and the calibrated CoRTN model. In Gndogdu et al. (2005) genetic algorithm was used to model the traffic noise in relation to traffic composition (vehicle per hour), the road gradient and the ratio of building height to the road width. In Rahmani et al. (2011) the proposed model is a function of total equivalent traffic flow and equivalent traffic speed. In both papers the authors used MATLAB to find the optimized values of model parameters. In this paper an application of four optimization techniques for the prediction of traffic noise is presented. These techniques are: genetic algorithms, Hooke and Jeeves algorithm, simulated annealing, and particle swarm optimization. The model that is proposed consists of five variables: the number of light motor vehicles, the number of medium trucks, the number of heavy trucks, the number of buses and the average traffic flow speed. All optimized models are tested on data measured on Serbian road using the originally developed user friendly software package.

In this paper a novel approach for modelling of traffic noise is presented. This approach is based on advanced optimization techniques on the contrary to regression analysis that is most widely used method for traffic noise modelling. Four optimization techniques were used to optimize the proposed model: genetic algorithms, Hooke and Jeeves algorithm, simulated annealing, and particle swarm optimization. The model is optimized and tested using originally developed user friendly software package. The goodness of the model is evaluated by statistical parameters and compared with experimental results and widely used regression model for traffic noise modelling developed by Fagotti et al. All statistical analysis show that the developed model is precise. Statistical tests showed a high correlation of proposed model to the measured values which makes the model significant. The proposed model operates with relatively simple input values (parameters and structure of traffic flow) that are easily measurable on site, and that are already monitored on the traffic network. Validation has shown that by measuring and monitoring traffic flow parameters it is possible by means of developed model to predict traffic noise level by far better than with classical statistical models. That makes it possible to take certain measures toward the traffic noise reducing by changing the influential traffic flow parameters and traffic regime. Based on calculated noise level by means of proposed model, it is possible to appraise the noise level in existing as well as in newly designed traffic arteries or detours, or during the traffic regime change on an existing network. Traffic noise is complex phenomenon that depends on many influential factors. Apart from intrinsic parameters such as numbers of vehicles in specific group of vehicles and the average speed of the traffic flow, there is also a group of parameters that are specific for area under investigation, such as speed limits, road surface, driving skills and habits, type of intersections, traffic lights’ schedules etc. The proposed model for the analysis of traffic noise is shown to be a reliable tool for the practical application of the calculating equivalent noise levels based on the traffic flow structure for typical road in Serbia. The weakness of the model is that it does not take into account the area specific parameters. Therefore the future research directions might be to include these specific parameters in model in order to make it more general.