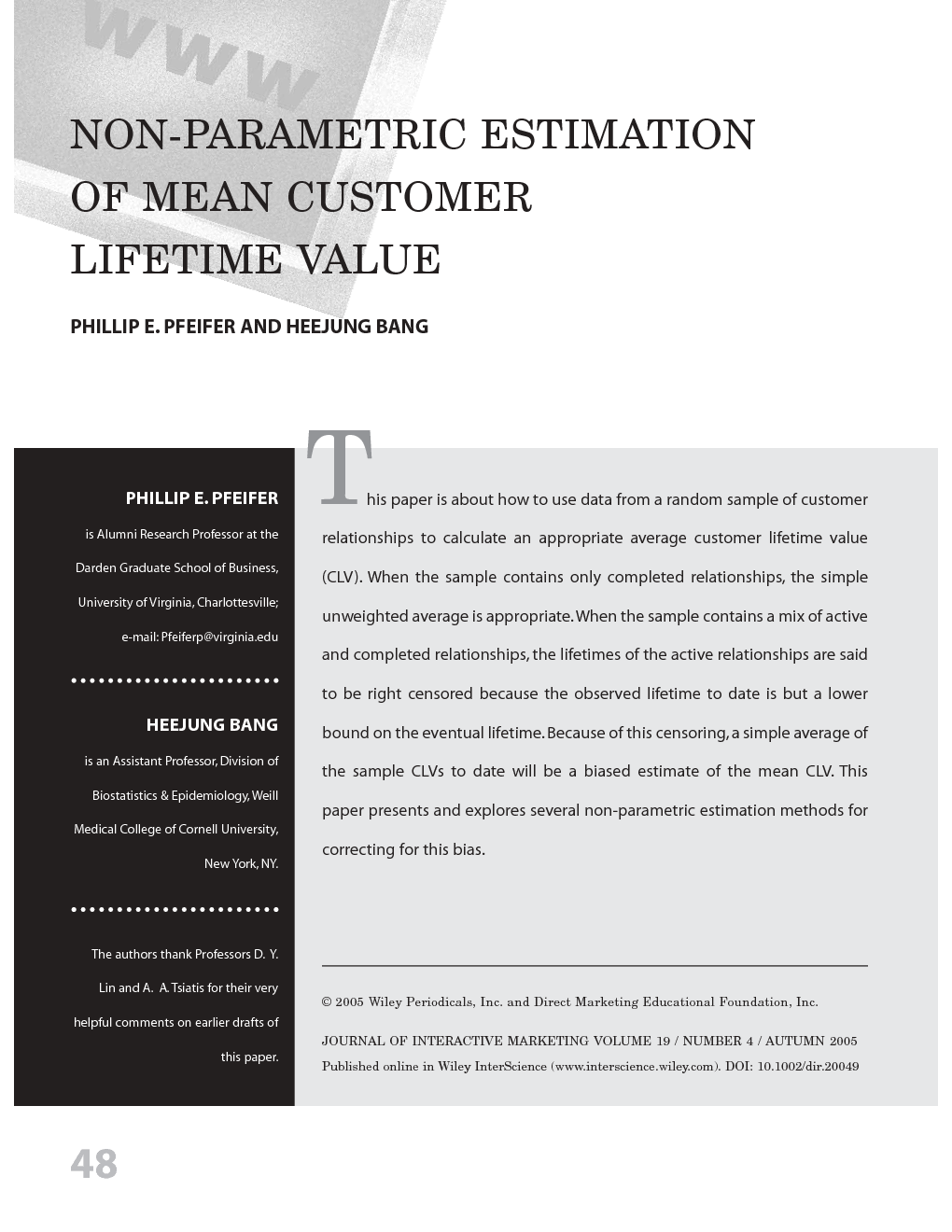 This paper is about how to use data from a random sample of customer relationships to calculate an appropriate average customer lifetime value (CLV). When the sample contains only completed relationships, the simple unweighted average is appropriate. When the sample contains a mix of active and completed relationships, the lifetimes of the active relationships are said to be right censored because the observed lifetime to date is but a lower bound on the eventual lifetime. Because of this censoring, a simple average of the sample CLVs to date will be a biased estimate of the mean CLV. This paper presents and explores several non-parametric estimation methods for correcting for this bias.

Thispaper isabout how to calculate an appropriate average customer lifetime value (CLV) for a sample of n customer relationships. Although there are a host of articlesdes cribing how to calculate CLV asa function of retention rates, gross margin per transaction or per period, remarketing costs, and a hurdle rate (see, for example Berger & Nasr, 1998; Blattberg & Deighton,1996; Dwyer, 1989; Hughes, 1997; and Pfeifer & Carraway, 2000), very few articlesoffer advice to managers on how to estimate the necessary inputs(Berger,Bolton,Bowman,Briggs,Eleten,Kumar,Parsuraman,& Terry, 2002 isa notable exception). Ass uggested by Jain and Singh (2002, p. 44), “research is needed into estimation methods that provide stable, consistent,and unbiased estimates (of CLV).”The purpose of this paper is to begin to do just that by addressing the question of how to use customer-level data to estimate an average or mean CLV.To be more specific, this paper addresses how to use data from a random sample of n customer relationships to estimate the mean CLV of the population of relationships from which the random sample was drawn. For example, if the n relationships all came from a particular source, then the mean of the population represents the long-run average CLV of relationships from this same source. Although the random-sample assumption might seem unduly restrictive, it is the usual assumption invoked whenever one uses data to draw inferences about a population.The construction of confidence intervals, for example, requires this random-sample assumption.The mean CLV isof particular interest to interactive marketers because it represents the long-run average (dollar) value of a relationship from the population.The mean CLV isthe metric used to make informed prospecting decisions in that it represents a limit on spending designed to initiate new relationships from the population. So, for example, after a cruise line estimated a surprisingly high mean CLV of $4,581 for its population of new customers, it decided to adjust its acquisition spending upwards (Berger, Weinberg, & Hanna, 2003).The mean CLV is usually sufficient for making marketing decisionsaffecting groupsof customers(prospects) when it is either infeasible or uneconomical to capitalize on individual differences. Prospecting decisions about media, copy, promotions, and sales force can often be made based on how each of these affects the average CLV of the customers acquired without regard for individual differences.Even decisions about how to treat existing customers are sometimes made based on group averages.Consider a firm conducting an experiment to decide how to treat a segment of customers reaching a specified milestone (e.g., their first called-in complaint,the graduation of their oldest child, or their first missed payment). The firm might apply treatments A and B randomly to the next several customers reaching the milestone, track the subsequent performance of two groups, and calculate the average CLV (discounting all future cash flows back to the point at which the treatment was administered) of the two groups in order to identify which treatment worked better.By CLV, we mean the present value of the future cash flows attributable to the customer relationship over the lifetime of that relationship (see Pfeifer, Haskins,& Conroy, 2005). Thus, the specification of CLV requires a careful delineation of a starting time point so as to be clear about what cash flows are in the future (and included in CLV) and what are in the past (and not included in CLV). For the purposes of this paper, it is important that the CLVscalculated for the sample customer relationships all use a common starting time point in the firm’s relationship with the customer.Often that start point is right before the receipt of the initial revenue from the customer.Customer lifetimes (or survival times) are usually measured relative to the time the firm acquired the customer. An implication of the random-sample assumption is that the calendar time of customer acquisition can be ignored. It is also important that all sample CLVs be calculated in a consistent manner across customers and throughout the study period.Finally, we will assume that CLV is defined using a finite horizon, H. The cash flows over at most H periodswill be included in CLV. Thismeansthat customers active for more than H periodswill be treated asif the relationship ended at H. The finite horizon assumption is one of convenience and statistical necessity.The construction of an appropriate average CLV depends on the nature of the sample relationships. In the second section, we consider the straightforward case in which the sample consists of n completed relationships.The major contribution of the paper is made in the third section, where we consider samples consisting of a mix of active and completed relationships with some of the sample relationships ending prior to H. The fourth section considers samples containing a mix of active and completed relationships but with none of the relationships ending prior to H.The situation in that section applies to firms in customer-migration situations (in the sense of Dwyer,1989) in which customers, once acquired, remain customers for the duration. In contrast, the situation in the third section applies to firms in customerretention situations (in the sense of Dwyer, 1989) in which customers can be lost for good. The paper concludes with a brief summary.The paper will consider only simple, non-parametric estimation methods. By non-parametric we mean that we will not assume a particular probability distribution (such as the lognormal, gamma, or exponential)for either the customer lifetime or the CLV. Instead,we will explore estimation methods that work regardless of the underlying probability distribution. (These methods are also known as “distribution-free” methods.)By simple, we mean methods that do not use predictive models of any sort. Methods such as Lin’s regression analysis (Lin, 2000a), Carides’s regression model (Carides, Heyse, & Iglewicz, 2000), and Lin’s proportional means model (Lin, 2000b) will not be considered in this paper. The paper will also not consider the use of individual-level stochastic models of customer relationships such as the one used by Venkatesan and Kumar (2004).