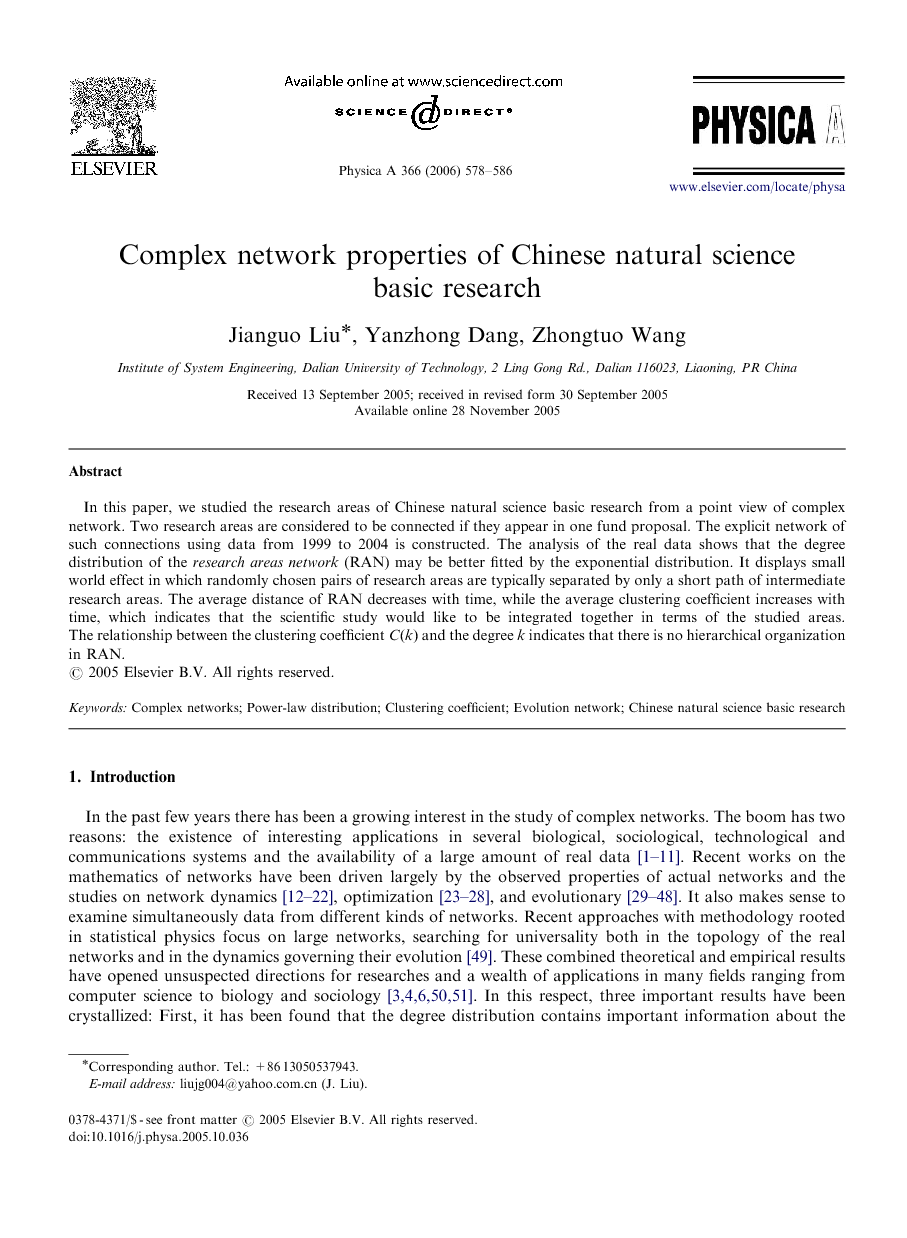 In this paper, we studied the research areas of Chinese natural science basic research from a point view of complex network. Two research areas are considered to be connected if they appear in one fund proposal. The explicit network of such connections using data from 1999 to 2004 is constructed. The analysis of the real data shows that the degree distribution of the research areas network (RAN) may be better fitted by the exponential distribution. It displays small world effect in which randomly chosen pairs of research areas are typically separated by only a short path of intermediate research areas. The average distance of RAN decreases with time, while the average clustering coefficient increases with time, which indicates that the scientific study would like to be integrated together in terms of the studied areas. The relationship between the clustering coefficient C(k)C(k) and the degree k indicates that there is no hierarchical organization in RAN.

In the past few years there has been a growing interest in the study of complex networks. The boom has two reasons: the existence of interesting applications in several biological, sociological, technological and communications systems and the availability of a large amount of real data [1], [2], [3], [4], [5], [6], [7], [8], [9], [10] and [11]. Recent works on the mathematics of networks have been driven largely by the observed properties of actual networks and the studies on network dynamics [12], [13], [14], [15], [16], [17], [18], [19], [20], [21] and [22], optimization [23], [24], [25], [26], [27] and [28], and evolutionary [29], [30], [31], [32], [33], [34], [35], [36], [37], [38], [39], [40], [41], [42], [43], [44], [45], [46], [47] and [48]. It also makes sense to examine simultaneously data from different kinds of networks. Recent approaches with methodology rooted in statistical physics focus on large networks, searching for universality both in the topology of the real networks and in the dynamics governing their evolution [49]. These combined theoretical and empirical results have opened unsuspected directions for researches and a wealth of applications in many fields ranging from computer science to biology and sociology [3], [4], [6], [50] and [51]. In this respect, three important results have been crystallized: First, it has been found that the degree distribution contains important information about the nature of the network, for many large networks following the exponential distribution and the power-law distributions. Second, most networks have the so-called small world property [2], which means that the average distance between different pairs of nodes is rather small. Third, real networks display a degree of clustering coefficient higher than expected for random networks [2] and [4]. Finally, the assortative mixing is studied to answer why social networks are different from other types of networks [53].

In this paper, we have constructed a research areas network and pointed out that such a network falls into the exponential distribution and small-world networks categories. With the observation in Section 2, RAN tend to be a disassortative network. The average distance of RAN decreases with time, while the clustering coefficient increases with time. This indicates that the research areas are tend to be crossed studied by the scientists. The dependence between clustering coefficient and k indicates that there is no hierarchical organization in RAN from 1999 to 2004.