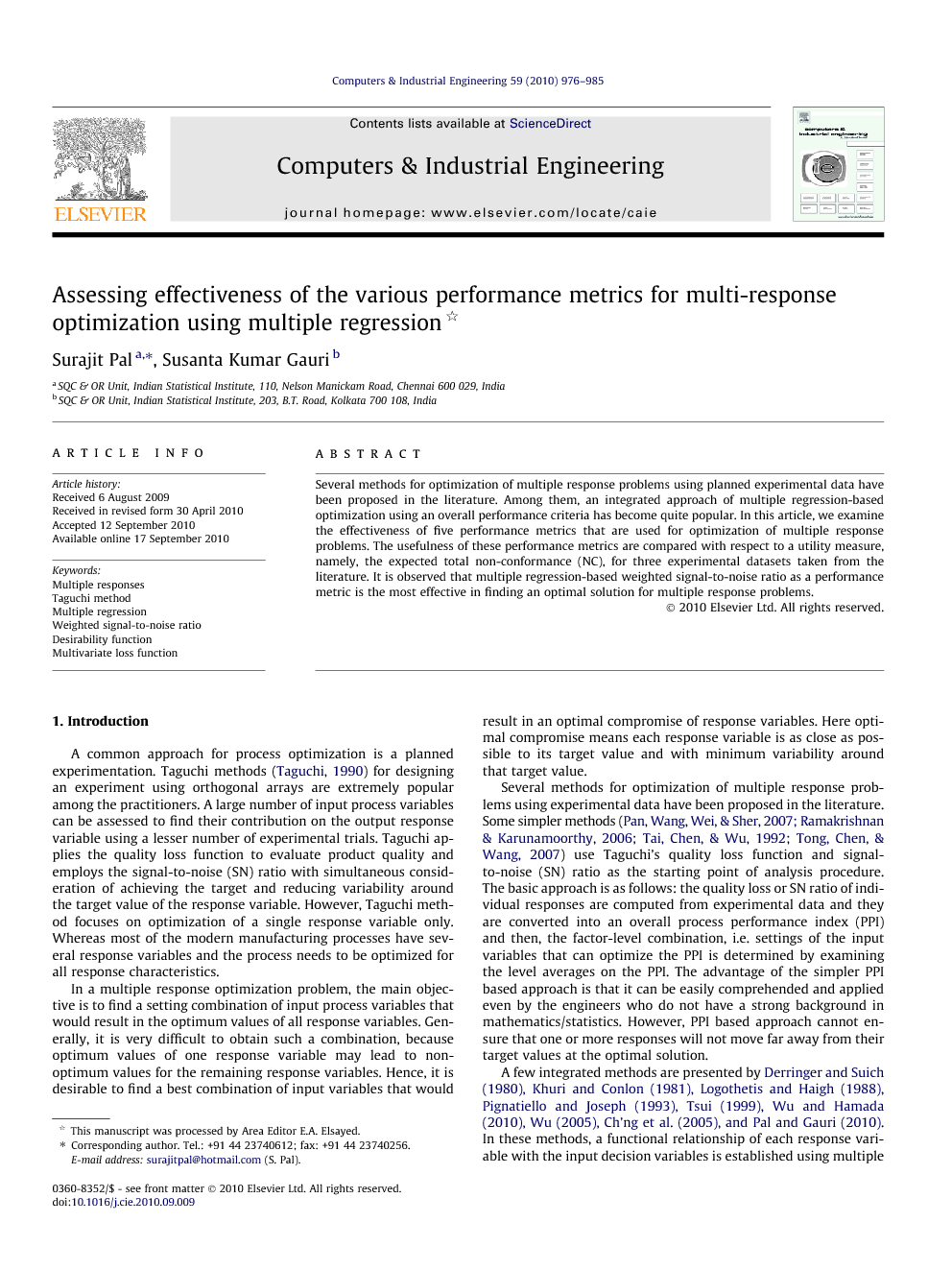 A common approach for process optimization is a planned experimentation. Taguchi methods (Taguchi, 1990) for designing an experiment using orthogonal arrays are extremely popular among the practitioners. A large number of input process variables can be assessed to find their contribution on the output response variable using a lesser number of experimental trials. Taguchi applies the quality loss function to evaluate product quality and employs the signal-to-noise (SN) ratio with simultaneous consideration of achieving the target and reducing variability around the target value of the response variable. However, Taguchi method focuses on optimization of a single response variable only. Whereas most of the modern manufacturing processes have several response variables and the process needs to be optimized for all response characteristics. In a multiple response optimization problem, the main objective is to find a setting combination of input process variables that would result in the optimum values of all response variables. Generally, it is very difficult to obtain such a combination, because optimum values of one response variable may lead to non-optimum values for the remaining response variables. Hence, it is desirable to find a best combination of input variables that would result in an optimal compromise of response variables. Here optimal compromise means each response variable is as close as possible to its target value and with minimum variability around that target value. Several methods for optimization of multiple response problems using experimental data have been proposed in the literature. Some simpler methods (Pan et al., 2007, Ramakrishnan and Karunamoorthy, 2006, Tai et al., 1992 and Tong et al., 2007) use Taguchi’s quality loss function and signal-to-noise (SN) ratio as the starting point of analysis procedure. The basic approach is as follows: the quality loss or SN ratio of individual responses are computed from experimental data and they are converted into an overall process performance index (PPI) and then, the factor-level combination, i.e. settings of the input variables that can optimize the PPI is determined by examining the level averages on the PPI. The advantage of the simpler PPI based approach is that it can be easily comprehended and applied even by the engineers who do not have a strong background in mathematics/statistics. However, PPI based approach cannot ensure that one or more responses will not move far away from their target values at the optimal solution. A few integrated methods are presented by Derringer and Suich, 1980, Khuri and Conlon, 1981, Logothetis and Haigh, 1988, Pignatiello and Joseph, 1993, Tsui, 1999, Wu and Hamada, 2000, Wu, 2005, Ch’ng et al., 2005 and Pal and Gauri, 2010. In these methods, a functional relationship of each response variable with the input decision variables is established using multiple regression techniques, and then, the optimal solution is determined by considering an appropriately defined objective function as the performance metric for optimization. Different researchers have defined different objective functions, e.g. (i) desirability function (Derringer and Suich, 1980, Wu, 2005 and Wu and Hamada, 2000), (ii) distance measure (Khuri & Conlon, 1981), (iii) multivariate (MV) loss function (Pignatiello and Joseph, 1993 and Tsui, 1999), (iv) process capability index View the MathML sourceCpm∗ (Ch’ng et al., 2005), and (v) multiple regression-based weighted signal-to-noise (MRWSN) ratio (Pal & Gauri, 2010). The aim of the present work is to examine the effectiveness of the various performance metrics that are used in the multiple regression-based methods for optimization of multi-response problems. An ideal optimal solution to a multi-response problem should result in that all the individual responses achieve their respective target value with the minimum variance around the target value. In this context, expected non-conformance (NC) of the process can be an appropriate measure of the goodness of an optimal solution. So expected NC at the optimal solution is considered here as the utility measure of a performance metric. It may be noted that expected NC can be computed only if the specifications for the responses are known. For the comparison of the usefulness of the various performance metrics, therefore, three experimental datasets with known specifications for the responses are analyzed using various multiple regression-based multi-response optimization procedures. The article is organized as follows: the second section provides a brief literature review on the existing methodologies for dealing with the multi-response optimization problems. The third section outlines the multiple regression-based optimization procedure using different performance metrics. The fourth section describes the utility functions, namely, expected process NC and the procedure for comparison of different performance metrics. In Section 5, we consider three sets of experimental data for analysis and comparison. We conclude in Section 6.

There are several multiple regression-based integrated approaches for multi-response optimization. In these approaches, a functional relationship of each response variable with the input decision variables is established first using multiple regression techniques, and then the optimal solution is determined by optimizing an appropriately defined objective function called as the performance metric. In this paper, five different performance metrics are considered and their effectiveness for optimization of multi-response data is examined. The usefulness of these metrics is compared with respect to expected total non-conformance (NC) analyzing three sets of planned experimental data obtained from previously published articles. It is found that the desirability function approach, one of the most popular and strongly suggested methods, often fails to provide the optimal solution. The reason is that the desirability function approach does not consider the expected variability and therefore, it gives a solution where all the response variables are close to their target values, but not with minimum variability. However, multiplicative MV loss function and total View the MathML sourceCpm∗ as performance metric results in minimum total NC quite often. But, MRWSN method, which uses MRWSN as performance metric and tries to find the optimal solution by minimizing the expected variability of individual responses, is found to be the most effective in finding the optimal solution