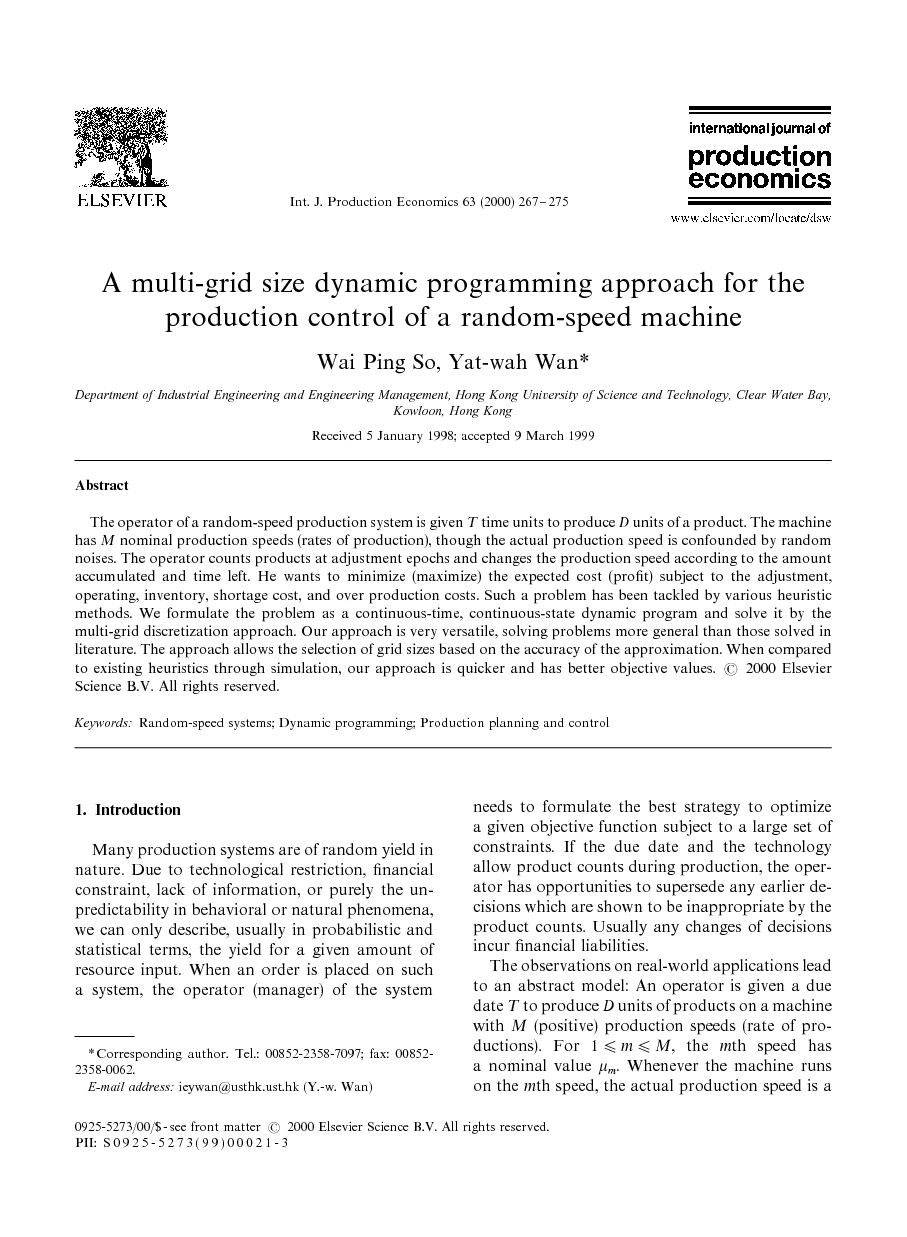 The operator of a random-speed production system is given T time units to produce D units of a product. The machine has M nominal production speeds (rates of production), though the actual production speed is confounded by random noises. The operator counts products at adjustment epochs and changes the production speed according to the amount accumulated and time left. He wants to minimize (maximize) the expected cost (profit) subject to the adjustment, operating, inventory, shortage cost, and over production costs. Such a problem has been tackled by various heuristic methods. We formulate the problem as a continuous-time, continuous-state dynamic program and solve it by the multi-grid discretization approach. Our approach is very versatile, solving problems more general than those solved in literature. The approach allows the selection of grid sizes based on the accuracy of the approximation. When compared to existing heuristics through simulation, our approach is quicker and has better objective values.

Many production systems are of random yield in nature. Due to technological restriction, financial constraint, lack of information, or purely the unpredictability in behavioral or natural phenomena, we can only describe, usually in probabilistic and statistical terms, the yield for a given amount of resource input. When an order is placed on such a system, the operator (manager) of the system needs to formulate the best strategy to optimize a given objective function subject to a large set of constraints. If the due date and the technology allow product counts during production, the operator has opportunities to supersede any earlier decisions which are shown to be inappropriate by the product counts. Usually any changes of decisions incur financial liabilities. The observations on real-world applications lead to an abstract model: An operator is given a due date T to produce D units of products on a machine with M (positive) production speeds (rate of productions). For 1⩽m⩽M, the mth speed has a nominal value μm. Whenever the machine runs on the mth speed, the actual production speed is a random variable Vm whose value is not known by the operator. All the random speeds are assumed to be independent, and μm=E(Vm) for m=1 to M. To reveal the production progress, the operator counts the amount of products produced at selected epochs and adjusts the nominal production speed based on the time left and quantity produced. His objective is to minimize (maximize) the total cost (profit). In this paper, we assume that each product count (or adjustment) costs $K; the mth speed costs $cm per unit time, cm⩽cm+1, and μm⩽μm+1; each unit short costs $cs; each unit over produced costs $co; each unit of product in inventory costs $h per unit time. The actual values of and cs vary across industries, being negligibly small in some cases. We keep all of them here to show the generality of our approach. The approach is applicable both to minimize cost and maximize profit. We will consider cost minimization in subsequent sections. We need more notation to convey our idea: Let N be the number of adjustment points, ti be the occurrence time of the ith adjustment point be the index of the nominal speed in , i.e., Vxi is the random variable representing the actual production speed in , and Di be the cumulative amount produced up to the ith adjustment epoch. With our notation, the total adjustment cost=NK; the operating cost between the ith and the (i+1)th adjustment epochs is cVi(ti+1−ti); the total inventory cost attributed to items produced between the ith and the (i+1)th adjustment epochs is ; the cost of over production is co[D−∑Ni=1VXi(ti+1−ti)]− and the cost of shortage is cs[D−∑Ni=1VXi(ti+1−ti)]+, where [(·)]−=−min[(·), 0] and [(·)]+=max[(·), 0]. Collecting all terms, it seems that f(D,T), the minimal expected total cost for an order of size D units due in T time units, would be of the form equation(1) The formulation in (1) is misleading; it looks as if the optimal values of all Xi's, ti's and N can be obtained by solving (1) at epoch 0 prior to production. In fact, because , and VXi are (random) functions of the realization of ti and Di, minimizing simply according to (1) misses both the interrelationship between these variables and the real-time information accumulated during production. Currently, most methods applied to this problem are adaptive in nature. The operator decides, based on a selected policy, the time of the next adjustment and the nominal speed used till then. The operator stops at the next adjustment epoch if there are sufficient products or if time has run out; else he decides the next adjustment point and the nominal speed used till then based on the time left and the amount produced.

In this paper, we have discussed the MGDP approach to control a production system with random speeds. The method is the most versatile that we find in literature. It is applicable to any objective functions, linear, non-linear, integer, or any combination of above, and to any speed distributions. The procedure does not depend on any special properties of speed distributions and hence is truly universally applicable. Unlike other adaptive methods that need sequential optimization at each adjustment points, MGDP only needs to solve a dynamic program at the beginning. At subsequent adjustment points, we only read from the results of the original dynamic programs to obtain optimal speeds and duration. Based on our numerical experience, MGDP outperforms existing heuristics in accuracy, computation time, or both of them. The trade off between the accuracy and the computation time can also conveniently be tuned by adjusting the accuracy level r.