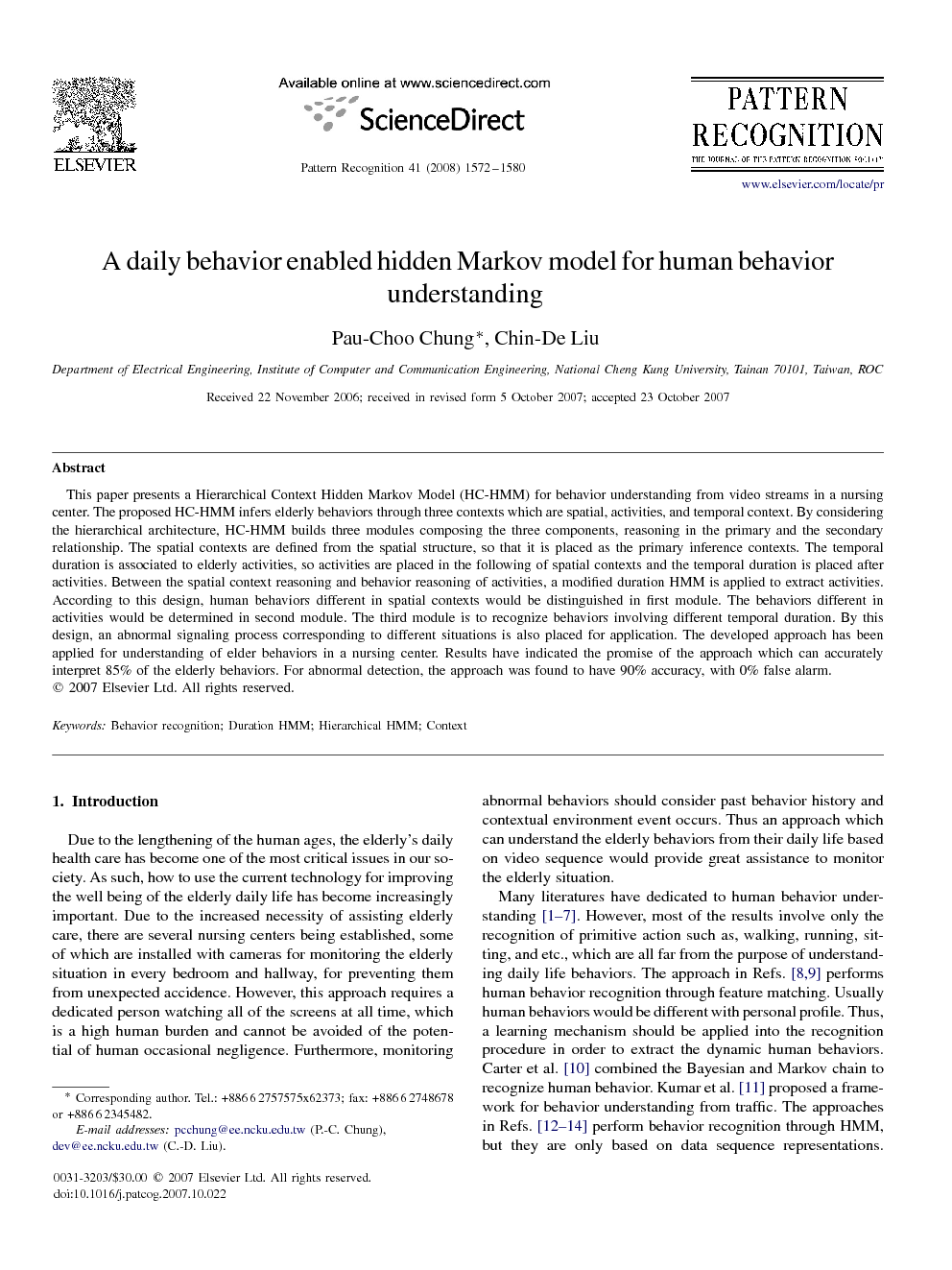 This paper presents a Hierarchical Context Hidden Markov Model (HC-HMM) for behavior understanding from video streams in a nursing center. The proposed HC-HMM infers elderly behaviors through three contexts which are spatial, activities, and temporal context. By considering the hierarchical architecture, HC-HMM builds three modules composing the three components, reasoning in the primary and the secondary relationship. The spatial contexts are defined from the spatial structure, so that it is placed as the primary inference contexts. The temporal duration is associated to elderly activities, so activities are placed in the following of spatial contexts and the temporal duration is placed after activities. Between the spatial context reasoning and behavior reasoning of activities, a modified duration HMM is applied to extract activities. According to this design, human behaviors different in spatial contexts would be distinguished in first module. The behaviors different in activities would be determined in second module. The third module is to recognize behaviors involving different temporal duration. By this design, an abnormal signaling process corresponding to different situations is also placed for application. The developed approach has been applied for understanding of elder behaviors in a nursing center. Results have indicated the promise of the approach which can accurately interpret 85% of the elderly behaviors. For abnormal detection, the approach was found to have 90% accuracy, with 0% false alarm.

Due to the lengthening of the human ages, the elderly's daily health care has become one of the most critical issues in our society. As such, how to use the current technology for improving the well being of the elderly daily life has become increasingly important. Due to the increased necessity of assisting elderly care, there are several nursing centers being established, some of which are installed with cameras for monitoring the elderly situation in every bedroom and hallway, for preventing them from unexpected accidence. However, this approach requires a dedicated person watching all of the screens at all time, which is a high human burden and cannot be avoided of the potential of human occasional negligence. Furthermore, monitoring abnormal behaviors should consider past behavior history and contextual environment event occurs. Thus an approach which can understand the elderly behaviors from their daily life based on video sequence would provide great assistance to monitor the elderly situation. Many literatures have dedicated to human behavior understanding [1], [2], [3], [4], [5], [6] and [7]. However, most of the results involve only the recognition of primitive action such as, walking, running, sitting, and etc., which are all far from the purpose of understanding daily life behaviors. The approach in Refs. [8] and [9] performs human behavior recognition through feature matching. Usually human behaviors would be different with personal profile. Thus, a learning mechanism should be applied into the recognition procedure in order to extract the dynamic human behaviors. Carter et al. [10] combined the Bayesian and Markov chain to recognize human behavior. Kumar et al. [11] proposed a framework for behavior understanding from traffic. The approaches in Refs. [12], [13] and [14] perform behavior recognition through HMM, but they are only based on data sequence representations. As we know, an activity could be in different speed resulting in different time duration. To solve the problem of speed, duration HMM (DHMM) proposed in Refs. [15], [16], [17] and [18] included the duration consideration into recognition procedure. But these proposed methods focused only on data representations, without spatial context (SC) consideration. On the other hand, the approach in Ref. [19] performs behavior recognition by only sequence of SCs (denoted as landmark), and [20] performed behavior recognition based on SC and TC (temporal context) only. Both methods do not consider human activities in behavior recognition. As we know, a human behavior is usually perceived from human activities a person performs followed by his interactions with the surrounding environment. Thus, human behavior recognition should simultaneously consider SCs, temporal information and activities. Based on these considerations, a Hierarchical Context Hidden Markov Model (HC-HMM) which is enabled to include these three components into behavior recognition is proposed. The HC-HMM contains three modules, which are devised from the hierarchical architecture in Refs. [21], [22] and [23]. As SC, activities and temporal information have primary and secondary relationship, these three modules are also constructed into a primary and secondary relationship. The first module plays as the primary by selecting human behaviors considering the SCs. From the selected human behaviors, the second module then screens the candidate behaviors according to human activities. Finally, the third module includes the temporal information in behavior reasoning (BR). In order to encompass the activity speed variations arisen from different people, a DHMM is devised between the first module and the second module, to segment and to extract activities. Thus the second module can perform the recognition relying on only the activity sequence, without being affected by the activity speed variation. By this design, the HC-HMM is also able to signal abnormal situations. An abnormality could occur in DHMM, behaviors reasoning or temporal reasoning, which correspond to unknown activity, unreasonable activity and abnormal time duration. Relying on the abnormal analysis, the system can be applied into more applications. The remaining parts of the paper are described as follows. Section 2 describes feature extraction for activity recognition from video sequences. Section 3 presents HC-HMM architecture. Section 4 gives the experimental results. Finally the conclusions are drawn in Section 5.

In view of the increasing necessity of elderly care, a hierarchical-context based human behavior understanding from video streams for a nursing center has been developed. In contrast to existing approaches which base on only postures and activities, our system embeds activities and contexts into a HC-HMM for behavior recognition. In HC-HMM, a behavior is established by a sequence of SCs which contains activities each of which is imposed with temporal reasoning. In this design, the activities, SCs and TCs are integrated in BR in the different modules. In order to obtain accurate activity recognition with speed variation, a DHMM is adopted. The speed variation is handled by the DHMM state duration which is determined by a sequence of the same postures. While high level behaviors exist only under certain contextual environments combined with activities, this approach provides a higher potential for behavior understanding. The developed approach has been applied to the understanding of the elderly daily life behaviors in a nursing center. Results have indicated the promise of the approach which can accurately interpret 42 behaviors among 49, with 85% accuracy rate. The approach is also employed for abnormal detection which was found to have accuracy of 8 among 9 abnormalities, with 90% accuracy rate, and with 100% true-positive alarm. The proposed method is currently applied in 2D video sequence, so the camera view and motion directions become an important issue of feature extractions. The system currently works in side-view with camera installed such that the optical axis is nearly perpendicular to the entrance direction of the bed room. Also the video segments for behavior recognition start from the patient leaving the bed and end in coming to the bed. In the future, we will improve the system to recognize daily behaviors with any starting and ending points, under which situations the identification of video segments for behavior recognition becomes much more challenging. The system is tested in the video sequences captured from the nursing center, and a life application installation is in the planning stage.