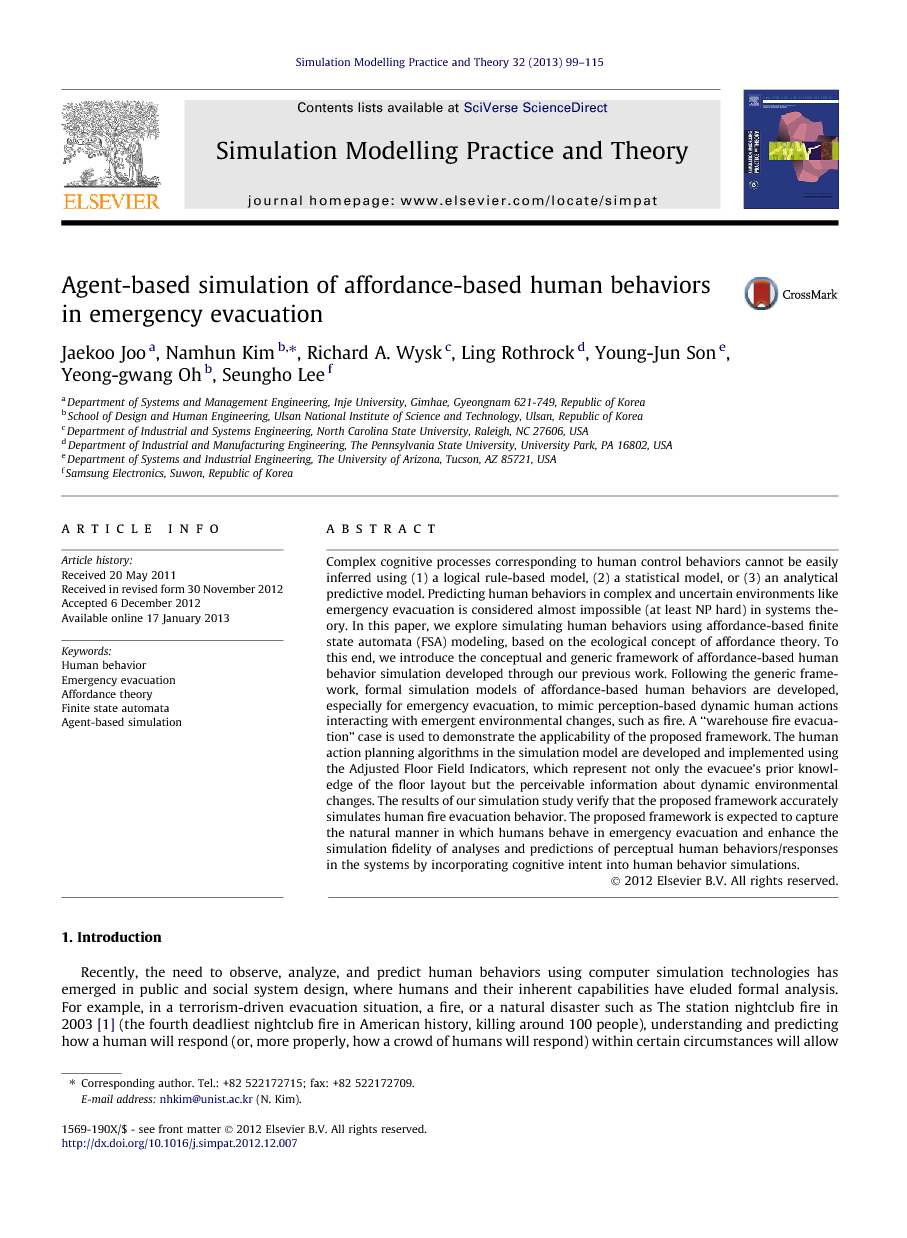 Complex cognitive processes corresponding to human control behaviors cannot be easily inferred using (1) a logical rule-based model, (2) a statistical model, or (3) an analytical predictive model. Predicting human behaviors in complex and uncertain environments like emergency evacuation is considered almost impossible (at least NP hard) in systems theory. In this paper, we explore simulating human behaviors using affordance-based finite state automata (FSA) modeling, based on the ecological concept of affordance theory. To this end, we introduce the conceptual and generic framework of affordance-based human behavior simulation developed through our previous work. Following the generic framework, formal simulation models of affordance-based human behaviors are developed, especially for emergency evacuation, to mimic perception-based dynamic human actions interacting with emergent environmental changes, such as fire. A “warehouse fire evacuation” case is used to demonstrate the applicability of the proposed framework. The human action planning algorithms in the simulation model are developed and implemented using the Adjusted Floor Field Indicators, which represent not only the evacuee’s prior knowledge of the floor layout but the perceivable information about dynamic environmental changes. The results of our simulation study verify that the proposed framework accurately simulates human fire evacuation behavior. The proposed framework is expected to capture the natural manner in which humans behave in emergency evacuation and enhance the simulation fidelity of analyses and predictions of perceptual human behaviors/responses in the systems by incorporating cognitive intent into human behavior simulations.

Emergency evacuations from disastrous situations represent a kind of complex human-environment system in which humans dynamically interact with environmental elements. In this research, we have explored a novel simulation methodology for emergency evacuation situations that incorporates the ecological concept of affordances. The modeling and simulation architecture proposed in this paper provides powerful capabilities for planning, scheduling, and executing human actions in prospective control over the simulation because it incorporates perception-based human decision-making processes into the discrete event-based system structures. We have demonstrated the applicability of the proposed framework by a simulation study using the illustrative example of the warehouse fire evacuation problem. The simulation capabilities of the proposed evacuation application have been demonstrated by being tested through simulation performances using different space layouts and numbers of system agents. The simulation model presented in this paper is agent-based as well as perception-based. It allows a human agent to make decisions based on perceived affordance given by surrounding environment. Since the proposed framework interprets human actions as a set of perceivable action opportunities, it can dramatically reduce the complexity of human behavior (for example, in the evacuation model, agents do not have many alternatives, they can only decide which cell they should occupy next) and give a new perspective of simulating human behaviors in systems. The human agent (evacuee) in the demonstrated simulation model has its own algorithm, the “minimum cost analysis algorithm,” which generates evacuation plans based on both prior knowledge of the floor layout and what it perceives in the perceivable boundary. The static and dynamic floor field indicators are applied to represent the human planning algorithm, and they are summed up to create the AFFIs indicating human behavioral patterns in the space. The proposed agent model can regenerate evacuation plans whenever its perceivable surrounding environments change. This simulates realistic human behaviors, which are dependent on perception-based decision-making, as asserted by ecological psychologists. We have implemented our simulation framework using the AnyLogic© simulation package. Our WFE problem was developed using FSA (cellular automata), a popular approach to system representation, with computability and scalability. The proposed framework is applicable to other problem domains [9] and [10]. Kim et al. provide manufacturing control and highway driving examples using affordance-based FSA formalism in [9] and [10], respectively. The examples developed using FSA formalism have computability and scalability [38]. The environmental model offers information on dimensional states, while the agent models indicate individual states under specific conditions. The combined FSA model should be able to simulate highly complex situations by including environmental and multiple agent dynamics simultaneously because the state transitions are all under the pre-defined conditions described in the FSA model. This will give us a systematic procedure by which to build affordance-based simulation models in complex human-involved systems for the simulation of human actions and the design of human-involved systems. While we have focused on the framework and human perception (a major function) in this work, the underlying assumption in this paper is that the agent-based simulation framework considers only perception-based action, which implies the ecological properties of affordance and effectivity, rather than the social factors that might affect human decision making. However, many problems remain to be overcome. The proposed model lacks the reality of an actual fire situation and should thus be used to model more realistic scenarios. Our warehouse layout, for example, is much simpler than actual warehouse layouts. In addition, although we suppose that the evacuees within each others’ PBs can affect each other, this does not necessarily mean that the social behaviors of the human agents have all been modeled. Social factors such as gender, race, age, and physical attributes were not considered in this research. We will consider these human social attributes (e.g., social psychology, emotions, cultures, and knowledge levels) in future research. We shall also have to validate the simulation results through human experiments in a suitable task environment (e.g., in a virtual reality). Using the proposed modeling and simulation framework for a variety of applications (such as pedestrian moving and building evacuation) will further the breadth and depth of the human-integrated systems and simulation areas containing complex and multiple human activities. The deliverables in this research are expected to merge system engineering technologies with human factors and generate a novel informational technology that can be used for future disaster simulations and homeland security management.