عنوان انگلیسی
The garbage can model of organisational behaviour: A theoretical reconstruction of some of its variants
دانلود فوری مقاله + سفارش ترجمه 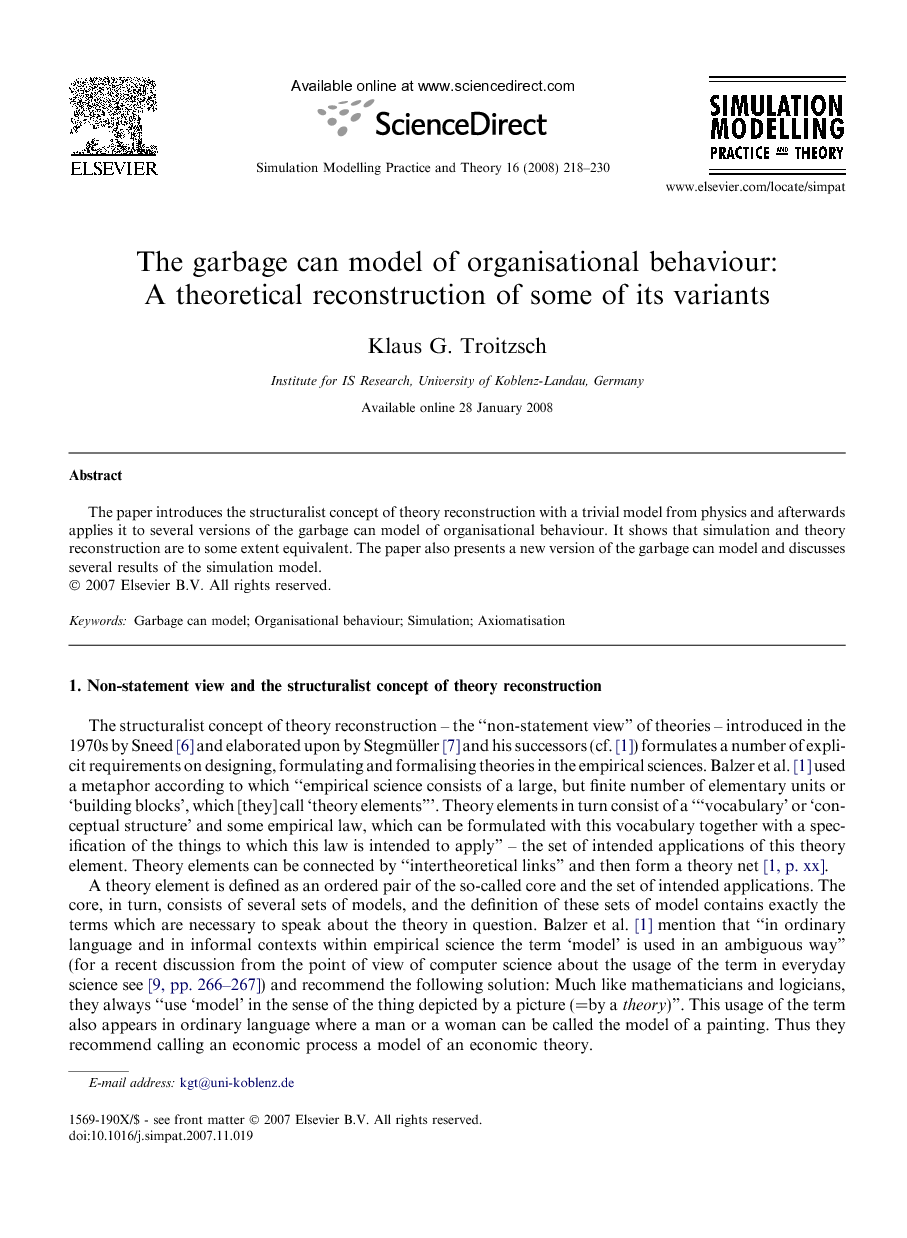 The paper introduces the structuralist concept of theory reconstruction with a trivial model from physics and afterwards applies it to several versions of the garbage can model of organisational behaviour. It shows that simulation and theory reconstruction are to some extent equivalent. The paper also presents a new version of the garbage can model and discusses several results of the simulation model.

The structuralist concept of theory reconstruction – the “non-statement view” of theories – introduced in the 1970s by Sneed [6] and elaborated upon by Stegmüller [7] and his successors (cf. [1]) formulates a number of explicit requirements on designing, formulating and formalising theories in the empirical sciences. Balzer et al. [1] used a metaphor according to which “empirical science consists of a large, but finite number of elementary units or ‘building blocks’, which [they] call ‘theory elements”’. Theory elements in turn consist of a “‘vocabulary’ or ‘conceptual structure’ and some empirical law, which can be formulated with this vocabulary together with a specification of the things to which this law is intended to apply” – the set of intended applications of this theory element. Theory elements can be connected by “intertheoretical links” and then form a theory net [1, p. xx]. A theory element is defined as an ordered pair of the so-called core and the set of intended applications. The core, in turn, consists of several sets of models, and the definition of these sets of model contains exactly the terms which are necessary to speak about the theory in question. Balzer et al. [1] mention that “in ordinary language and in informal contexts within empirical science the term ‘model’ is used in an ambiguous way” (for a recent discussion from the point of view of computer science about the usage of the term in everyday science see [9, pp. 266–267]) and recommend the following solution: Much like mathematicians and logicians, they always “use ‘model’ in the sense of the thing depicted by a picture (=by a theory)”. This usage of the term also appears in ordinary language where a man or a woman can be called the model of a painting. Thus they recommend calling an economic process a model of an economic theory. Another important point of view (which is not specific to the “non-statement” view) is the distinction between theoretical and non-theoretical terms where – and this is specific to the “non-statement view” – the criterion of theoreticity is always and only related to a specific theory element. Thus a term can be only theoretical with respect to one theory element, but non-theoretical with respect to another theory element. At the same time this means that calling a term “theoretical” is always incomplete, hence one has to call a term “theoretical with respect to theory element X”. Every non-trivial empirical theory element should have at least one term which is theoretical with respect to this theory element (for a discussion of this requirement in administrative science see [10, p. 901]). At least four sets of models of a theory element have to be described in a structuralist reconstruction1: the set of potential models – their description (see the example in Section 4) provides the vocabulary with which everything can be said about the structure of the things that the theory is concerned with, the set of partial potential models – their description restricts the vocabulary to those terms which can be used even without this theory, the set of (full) models – their description additionally contains the laws that are expected to apply, and the set of intended applications mentioned above, which is a subset of the set of partial potential models, and about these intended applications no complete formal description will be possible [1, p. 86–87].

We have so far compared an example of theory reconstruction from pre-modern physics with three examples of reconstructing versions of modern organisation theories, and we can, of course, compare the three latter examples with each other. These comparisons should have shown the following. The original version of Cohen et al. [3] and the reimplementation of [5] are very similar, with the exception that the latter introduce an exchange of “energy” in the case of the successful solution of a problem. The version presented in Sections 6 and 7 avoids the term “energy” and instead uses “skills” needed to perform tasks, which – in contrast to the original – are different in their requirements: all problems request the same “energy” whereas the tasks have very different requirements in terms of skills. Decision and access structures as explicitly defined in the original and the Lomi versions are implicit in the model of Sections 6 and 7 – they follow from the skill distributions of both workers and tasks, and this is perhaps more realistic than the fixed structures of the other models. What one could add to the new model is an algorithm for team formation: whenever workers realise that even the task that is most appropriate for their skills would lead to wasted skills, they could ask mates for help; from this something like self-organisation of team structures could emerge. But this is stuff for extended models. In economics and the social sciences we have to work with a larger number of object sets (classes) than particularly in mechanics. The elements of these object classes usually have a larger number of attributes, and there is a larger number of relations defined on these classes. In many cases a stochastic theory is necessary (independent of whether the real processes are believed to be deterministic or inherently stochastic), particularly when the properties of real-world entities cannot (yet) be properly measured. Whatever is not explained by the theory is often modelled as “noise”, as a random process – in this case one would not aim at making predictions for individual cases, but only predictions about the parameters of probability distributions which can then be validated against empirical distributions. In the models discussed here, random effects come in only in the initialisation phase, to instantiate a model organisation with its decision makers (workers) and problems (tasks); in the case of the model of Sections 6 and 7, moreover, a random allocation of tasks to workers is used as one of the modes of operation (which, in a way, resembles the allocation of tasks to call-center agents). The reconstruction of the different models or theories of organisational behaviour has shown commonalities and differences between them and perhaps facilitates a deeper understanding. The technique of reconstruction, with its clear distinction between theoretical and non-theoretical terms with respect to the theory in question, will be helpful for the design of empirical research, and the combination of simulation and non-statement view formalisation allows at least for making qualitative predictions from theoretical assumptions. To eliminate theoretical terms of economic or social theory we often use simulation instead of mathematical analysis, at least in many interesting cases, as – already in the relatively simple cases of the garbage can and its successors – the assumptions of the theory are so complicated that a closed mathematical solution seems out of range (but in the case of the introductory example of the theory of archery this was indeed possible). Usually it is possible to translate a structuralist reconstruction of a theory element into a simulation program and the other way around (cf. [8]). This means that our theories should be formulated in a way that allows for a translation into a computer simulation program, as a computer simulation program is a full model of the theory element one has in mind in the sense of the “non-statement view”. All the versions of theories of organisational behaviour presented so far have only ill-defined intended applications: No instruments have ever been presented to measure the non-theoretic terms of the theory elements discussed here, although the comparison between empirical claims of these theory elements and stylised facts about organisational behaviour would make us believe that in all cases there is at least some validity. But what makes a proper validation difficult or even impossible is the fact that organisations never behave exactly like stylised facts. In real organisations, the decision structure is much more complicated than any of the three decision structures (specialised, hierarchical and generalised) in the garbage can models of both Cohen et al. [3] and Lomi et al. [4] and [5], skills (as in the version of Section 6) are not uniformly distributed, and more than three types of skills can be distinguished. This leads to the preliminary conclusion that all these theories are much too simple to be validated against empirical data – if one had any data, say, about the distribution of “energy”, “abilities” or “skills” available in the personnel of an organisation, and if one had any data, say, about the distribution of “energy”, “abilities” or “skills” necessary to solve the problems an organisation is confronted with. On the other hand, as in the case of the toy theory of archery Ar, the theory elements discussed here were simple enough to use them as cases for a formal reconstruction.