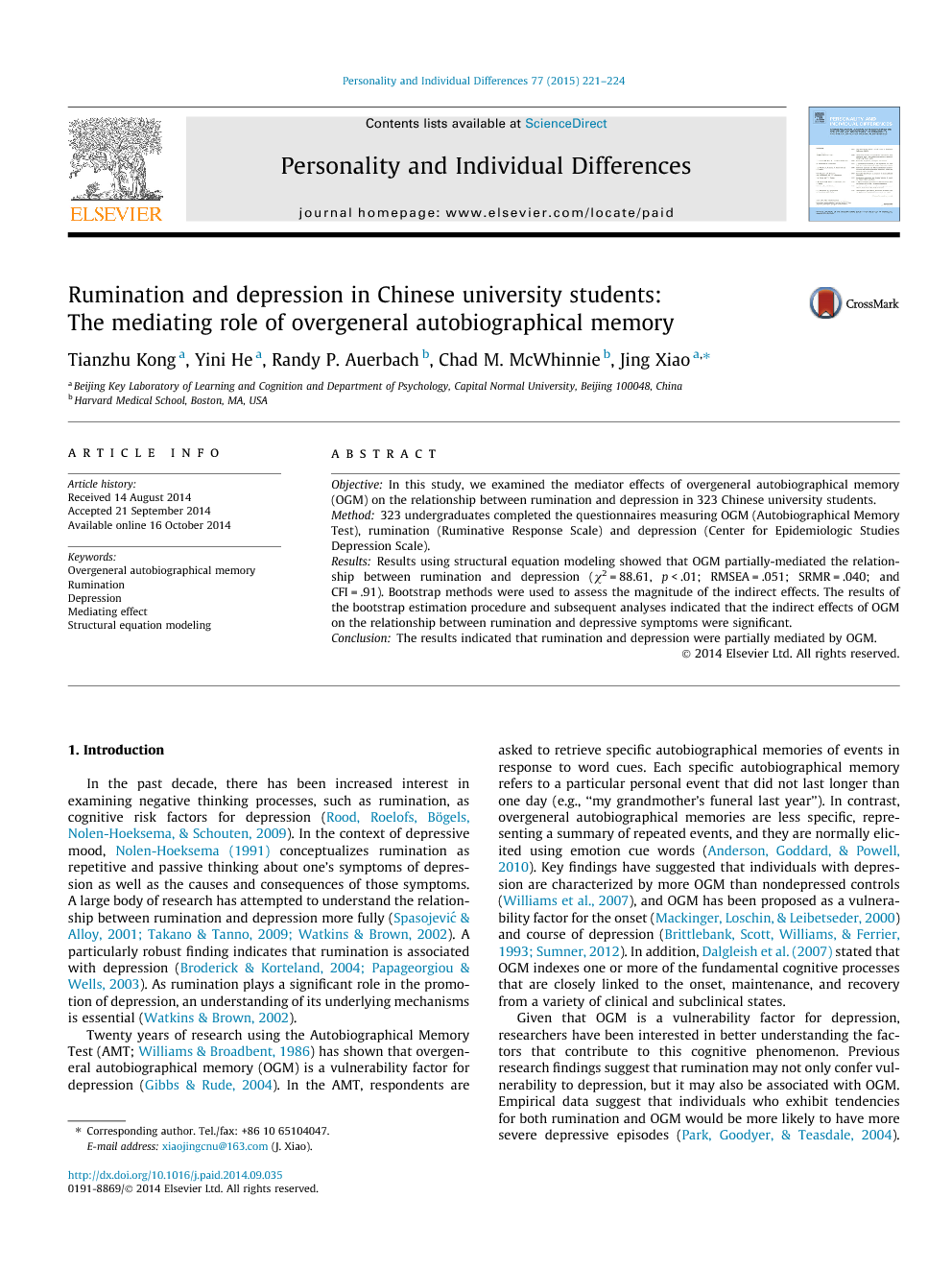 In the past decade, there has been increased interest in examining negative thinking processes, such as rumination, as cognitive risk factors for depression (Rood, Roelofs, Bögels, Nolen-Hoeksema, & Schouten, 2009). In the context of depressive mood, Nolen-Hoeksema (1991) conceptualizes rumination as repetitive and passive thinking about one’s symptoms of depression as well as the causes and consequences of those symptoms. A large body of research has attempted to understand the relationship between rumination and depression more fully (Spasojević and Alloy, 2001, Takano and Tanno, 2009 and Watkins and Brown, 2002). A particularly robust finding indicates that rumination is associated with depression (Broderick and Korteland, 2004 and Papageorgiou and Wells, 2003). As rumination plays a significant role in the promotion of depression, an understanding of its underlying mechanisms is essential (Watkins & Brown, 2002). Twenty years of research using the Autobiographical Memory Test (AMT; Williams & Broadbent, 1986) has shown that overgeneral autobiographical memory (OGM) is a vulnerability factor for depression (Gibbs & Rude, 2004). In the AMT, respondents are asked to retrieve specific autobiographical memories of events in response to word cues. Each specific autobiographical memory refers to a particular personal event that did not last longer than one day (e.g., “my grandmother’s funeral last year”). In contrast, overgeneral autobiographical memories are less specific, representing a summary of repeated events, and they are normally elicited using emotion cue words (Anderson, Goddard, & Powell, 2010). Key findings have suggested that individuals with depression are characterized by more OGM than nondepressed controls (Williams et al., 2007), and OGM has been proposed as a vulnerability factor for the onset (Mackinger, Loschin, & Leibetseder, 2000) and course of depression (Brittlebank et al., 1993 and Sumner, 2012). In addition, Dalgleish et al. (2007) stated that OGM indexes one or more of the fundamental cognitive processes that are closely linked to the onset, maintenance, and recovery from a variety of clinical and subclinical states. Given that OGM is a vulnerability factor for depression, researchers have been interested in better understanding the factors that contribute to this cognitive phenomenon. Previous research findings suggest that rumination may not only confer vulnerability to depression, but it may also be associated with OGM. Empirical data suggest that individuals who exhibit tendencies for both rumination and OGM would be more likely to have more severe depressive episodes (Park, Goodyer, & Teasdale, 2004). Kao, Dritschel, and Astell further proposed that individuals who exhibit rumination should be at higher risk for OGM (Kao, Dritschel, & Astell, 2006). Watkins and colleagues showed that by experimentally reducing rumination, autobiographical memory retrieval becomes more specific in depressed participants (Watkins & Teasdale, 2001). In addition, Sumner (2012) stated that two components of ruminative processing appear to be especially maladaptive for autobiographical memory specificity. These include: (1) adopting an abstract, analytical, and evaluative processing style that focuses on the causes, meanings, and consequences of one’s experience, and (2) processing negatively valenced self-related material (Sumner, 2012). These findings were supported the hypothesis that rumination may have a role in the development of OGM (Sumner, 2012). Together, the results of these studies suggest that more repetitive and passive thinking has a causal effect on OGM (e.g., Raes et al., 2008, Sumner, 2012 and Watkins and Teasdale, 2001). However, the hypothesis that OGM is a mediator between rumination and depression has not been fully tested, especially in nondepressed samples. Therefore, the aims of this study were (a) to examine the replicability of the associations between OGM, rumination, and depression, and (b) to investigate the hypothesis that OGM mediates the association between rumination and depression in a large sample of Chinese university students.

3.1. Structural model The measurement model involved three latent constructs (rumination, OGM, and depressive symptoms) and eight observed variables. An initial test of the hypothesized mediation model resulted in a good fit to the data from the Chinese university students: χ2 = 79.31, p < .01; RMSEA = .054 (90% CI: .03–.07); SRMR = .07; and CFI = .92. All of the factor loadings for the indicators on the latent variables were significant (p < .001), demonstrating that all the latent constructs were well represented by their indicators. In addition, all the latent constructs were significantly correlated in conceptually expected ways (p < .001). In subsequent analyses, the structural model was tested using the maximum likelihood estimation in the sample of Chinese university students. The direct path coefficient from the predictor (rumination) to the criterion (depressive symptoms) in the absence of mediators was significant (r = .41, p < .001). A partially mediated model with a mediator was a good fit to the data: χ2 = 88.61, p < .01; RMSEA = .051; SRMR = .040; and CFI = .91. For the final model, all of the structural paths are presented in Fig. 1. Full-size image (23 K) Fig. 1. Final structural model. Note: Factor loadings are standardized. R1 = brooding subscale of rumination; R2 = reflection subscale of rumination; AM1 = negative overgeneral autobiographical memory; AM2 = positive overgeneral autobiographical memory; D1 = depressed affect subscale of CESD; D2 = positive affect subscale of CESD; D3 = somatic complaints subscale of CESD; D4 = interpersonal relations subscale of CESD; ∗p < .05, ∗∗p < .01, ∗∗∗p < .001.